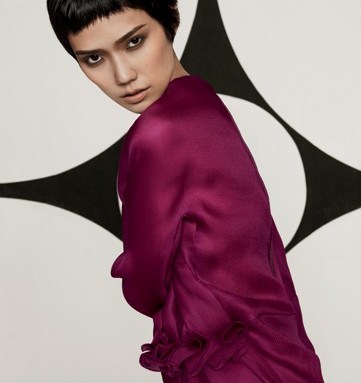 Meet three beauties who cross effortlessly from East to West—and back again.

Tao Okamoto
Call it the bowl cut that launched a career. When the Tokyo-born Tao Okamoto hit the New York scene two years ago, she created quite a first impression. Not only did she open the 3.1 Phillip Lim show, the designer decided that every model in the show should sport the same look. “It was amazing,” remembers Okamoto. “I thought he was joking when he first told me.” Okamoto’s meteoric rise is no laughing matter, however. Now firmly ensconced on the international modeling scene, she’s been photographed by the likes of Mert & Marcus and Steven Meisel for Allure, W and multiple editions of Vogue (Vogue Nippon devoted an entire issue to her.) Since the infamous hair style, Okamoto’s look has evolved—currently, she’s sporting a cropped boy cut—and she remains as in demand as ever. And if things go according to plan, you just might see her name up in lights. A Broadway buff (her favorite shows are Wicked and Hairspray) who studied singing in college, Okamoto is already thinking about the next stage of her career. “I would love to do something with music,” she beams.

Ming Xi
Born in Shanghai, 22-year-old Ming was studying fashion in her hometown when she was discovered. No wonder she’s gone on to become a favorite of designers such as Givenchy’s Riccardo Tisci and Diane von Furstenberg, booking on average about 50 shows a season. She doesn’t have a beauty contract—yet—but not for lack of desire. “Those pictures always look so beautiful,” says Ming. “Usually in pictures you look cool,” she continues, putting air quotes around the word, “but not sweet and pretty. Shanghai girls love to be pretty.” Ming’s style is as kinetic as her hometown. “I don’t have a usual style,” she says. “I like to think of what character I want to be today. So one day I’m a rocker in a leather jacket and pants, the next I’m a schoolgirl in a short skirt.” Although she’s in Shanghai almost on a monthly basis—Peter Lindbergh, Hans Feurer and Lachlan Bailey have all shot her for Chinese Vogue—and she’s also worked with the likes of Mario Testino and Daniel Jackson, she’s taken to her new life with gusto. “I love New York,” she enthuses. “I feel more free when I’m here.”

Hyoni Kang
Hailing from Seoul, South Korea, Hyoni Kang may be known as a fashion plate in the West—she was the first Asian girl to win the Ford Supermodel of the World contest back in 2008 and she booked over 25 shows her first season in New York alone. But at home, she’s a veritable style icon. In addition to hosting a TV show, she also designs her own line of clothes with two friends (a stylist and photographer) which today are sold in their own boutique in Seoul, as well as Lane Crawford in Hong Kong and Singer 22 in the U.S. “I don’t have any personal time,” she laughs. “I’m always either modeling or working on my business.” Thus far, she’s clocked shoots with Steven Meisel, Jason Kibbler and Sebastian Kim, among others, and has been seen in Vogue, V and Dazed & Confused. Kang does lavish time on her skin, however, with an elaborate routine that’s common among Korean women. “I use a lot,” says the beauty, detailing a five-step regimen that consists of cleansing, eye cream, essence, lotion and cream. “I also take a multivitamin every day,” she adds. “I see a lot of women doing Botox as they get older. My opinion is that rather than waiting until you’re old, if you do the preventative from the start, you won’t have to take care of it.”