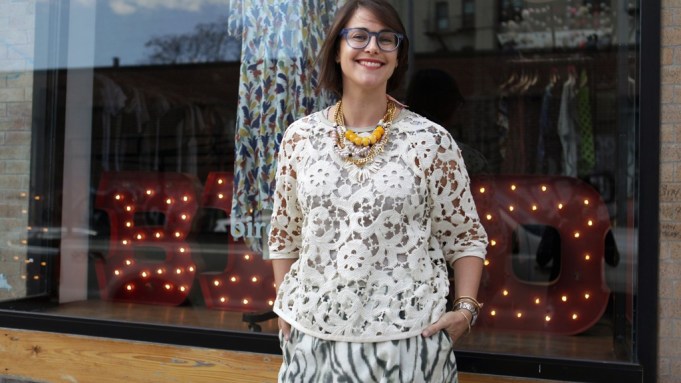 A lot has changed in Brooklyn in the 15 years since Bird first opened at 430 Seventh Avenue, in Park Slope, and more than a few of those changes have come under the direct influence of Bird itself. Or, rather, the store’s owner Jennifer Mankins, whose fashion and retail point of view has shaped a highly specific aesthetic now synonymous with Brooklyn, though the borough’s stylistic proclivities have long since transcended its geographic borders.

“There’s a certain accessibility; I hate to use the word practicality, because people say that’s so not sexy or glamorous or fashionable,” said Mankins on a recent Wednesday at Bird’s Williamsburg location, attempting to conjure a description of the look that one need only lay eyes on her to understand. Dressed in a boxy lace Isabel Marant top, a 3.1 Phillip Lim skirt in a wood-grain print and a garland of beaded Lizzie Fortunato necklaces, Mankins presents as a devout ambassador of eclectically intellectual Brooklyn style — to which a level of comfort is key — from head (oversize blue-framed glasses by Cutler and Gross) to toe (No. 6 clog sandals). “I mean, I sell a lot of clogs, that’s what represents the Brooklyn lifestyle,” she said, laughing at the cliché she helped create.

In its current state, Bird bears little resemblance to its original form as a local purveyor of cute yet quirky basics brands like Built by Wendy, Velvet and Ella Moss. Mankins now presides over a mini chain of three stores positioned in some of the most desirable neighborhoods in Brooklyn. In 2006 Bird opened on Smith Street in Cobble Hill, and in 2009 she doubled her square footage on Grand Street in South Williamsburg. The latter stocks a sizable men’s selection with a smaller assortment in Park Slope. Given the stores’ relatively close proximity, Bird is an unusual example of independent retail that has managed to survive and, by all appearances, thrive.

The store is celebrating 15 years on April 24 at the Grand Street location, with several staple designers, including Tsumori Chisato, Rachel Comey, Maria Cornejo and Jane Mayle, making exclusive merchandise for the occasion. A small caveat, if no less a reason to party, to the anniversary is the fact that Mankins didn’t come into the picture until 2004 when she purchased Bird from its founders, Belle Benson and Marla Walker, who were looking to sell. “It was this adorable boutique that already had a great reputation, great customers, was already up and running,” Mankins said. “I could come in, not spend five years doing that work and really start growing the business and elevating it in all the interesting ways that I saw as possibilities for Brooklyn.”

Her first order of business was escalating the fashion quotient, stocking a host of then little-known international labels such as Isabel Marant, Vanessa Bruno, Chisato and Christophe Lemaire “a million years ago before he did Lacoste and then came back as Christophe Lemaire” (not to mention before he became the creative director of Hermès). Comey and Acne Studios have been among Mankins’ top performers for years. The women of Park Slope were hungry for real fashion — at the time Bird was the only game in town — and the women of Cobble Hill followed: “From Day One it was flooded with customers who were interesting, creative, had great jobs, money to spend, loved fashion. Informed.” Mankins knew how to stoke their appetites, drawing on her own inherent curiosity about new things and an acute feel for retail learned as a quick study on a steep curve.

Between graduating from Brown University in 1997 and taking over Bird in 2004, Mankins worked at three very different retail establishments. The first was By George, in Austin, Tex., where Mankins, who grew up in Texarkana, moved postgraduation to prepare for her MCATs but found herself permanently waylaid by fashion. She relocated to New York, where her now husband Niklas Arnegren was living, and got a job in the buying department at Barneys New York, an invaluable experience because “it was like, ‘Here are the numbers. Read the numbers. You’re responsible for the numbers,’” said Mankins, her Texas twang still discernible after 15-plus years in the Northeast. “Thank god my mom was a math teacher. I’m really good at math. It goes a long way in terms of running a business.” From there she went to work for Steven Alan, who she says gave her confidence in her own taste.

“When we moved to Brooklyn we had maybe a couple other friends who lived here,” said Mankins. “Now I find it a novelty when I find people who live in Manhattan. Like, oh really? That’s so exotic.” Indeed, the mass influx of creative-type affluence and image has long since flooded the borough, igniting a hive of independent retail activity. Increasingly the major players are following suit. Mankins’ alma maters Barneys and Steven Alan opened outposts not far from Bird’s Cobble Hill location well after she had broken in the neighborhood. Intermix opened on Smith Street last year. A Rag & Bone store is forthcoming on Court Street in May and J. Crew is opening two stores in Brooklyn in August, one in Williamsburg and one in Park Slope. A lease for a Madewell in Williamsburg is also in the works.

“Jen’s my Williamsburg connection. She’s probably one of the reasons we’re opening there,” said Mickey Drexler, chairman and chief executive officer of J. Crew Inc., who befriended Mankins in 2011 when she picked up the Madewell brand, which did not have a wholesale business, exclusively for her stores. The two still have lunch on the regular, when she brings the self-proclaimed “Manhattan-centric” Drexler to the cool restaurants in Brooklyn.

Being so entrenched in the Brooklyn community has worked for Mankins personally and professionally. She has always preferred its breathing room to Manhattan’s hustle, but she bristles at the idea that she plays by a different, lesser set of rules than her peers on the island. She came close to signing a lease in SoHo in 2008 but chose Williamsburg instead. Future outposts in Manhattan or other locations — she is constantly pitched about opening in Los Angeles, San Francisco and Washington — are not out of the question.

“When I’m talking to my staff, it’s not like, ‘We’re Brooklyn, we can be easier, we’re secondary,’” said Mankins. “We’re competing on the highest stage with all the luxury stores, all the designer stores and now with e-commerce accessibility, we’re competing basically with everybody globally.” She says she is firm but fair about exclusives, particularly when she gets to an obscure designer first. In terms of the labels that she championed early on and have since gained wide distribution (and become much more expensive), like Alexander Wang, Isabel Marant and Acne Studios, Mankins appreciates how brand awareness drives sales, raises the customer’s price threshold and forces her to try new things. She’s had success with Christian Wijnants. Bird will for the first time stock Marni for fall.

When asked about potential e-commerce growth, Mankins pointed to the wood paneling in the Williamsburg store, salvaged from a loft building in SoHo. “It’s all first-growth wood from the Carolinas — probably over 100 years old — and when they cut it and installed it, you can see where sap was coming out,” she said. “Everyone who has walked in the door for five years says, ‘Oh my god, it smells so good in here.’ That’s not something you’re going to get a on a Web site.” That said, Bird’s site, shopbird.com, has been up and running for eight years, albeit in a supporting role to the brick-and-mortar stores. E-commerce is a tiny part of Bird’s business, but a dedicated team is in place to change that. “Again hindsight is 20/20,” said Mankins. “If eight years ago I had put all of my energy into e-commerce, maybe I’d be Net-a-porter.”