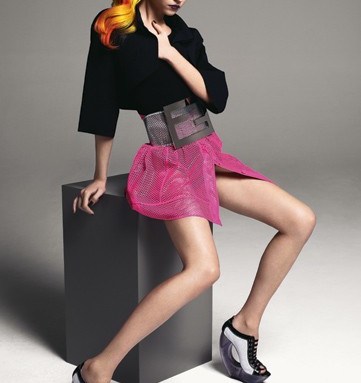 It takes more than just a pretty face to be fashion’s next “It” girl. Here, a look at 12 young models who just might have what it takes to break out of the bunch.

The basic requirements to become a model might only be skin deep. But to really stand out, a girl needs passion, energy and a character strong enough to withstand the pressures of the fickle fashion industry. “You have to have a really strong personality to stay in this business,” says Jennifer Venditti, founder and casting director of JV8INC, whose clients include Vera Wang and Marc Jacobs. To discover who in this year’s crop of fresh faces we’ll be on a first-name basis with next year, WWD Beauty Biz canvassed industry insiders for their take on the season’s hottest hopefuls.

GIEDRE
New York
Age: 19
Runways walked: Chanel, Emilio Pucci, Matthew Williamson, Collette Dinnigan, Luella
Standout moment: Until now, her schedule has been limited by high school. But she’s hit the ground running. Look for her in V Magazine, i-D, Numero, Wonderland Magazine and 10. “People respond to her because they can tell that she’s a quirky, interesting girl behind her face,” says JV8INC’s casting associate Edward Kim.

LERA
Supreme
Age: 16
Runways walked: Marc Jacobs, Jil Sander, Marni, Moschino Cheap & Chic, Nathan Jenden
Standout moment: Opening Marc Jacobs spring ’08 show gave her a stamp of approval to the fashion industry. “Marc Jacobs has the ability to take someone who’s a character and make them more accessible,” says Venditti. “There’s always that wild one, the black horse. And I think Lera could be that.”

ALI
DNA
Age: 17
Runways walked: Lanvin, John Galliano, Chanel, Christian Lacroix, Yohji Yamamoto
Standout moment: The Texan native has been out of the gate for just a year and already shot a solo editorial in W with Mario Sorrenti and a GF Ferré campaign with Mario Testino. Says Weir, “She’s got the big eyebrows, the full lips, the beautiful pale skin.”

DAUL
Elite
Age: 17
Runways walked: Alexander McQueen, Chanel, Salvatore Ferragamo, Helmut Lang, Yigal Azrouël
Standout moment: Already famous in South Korea, this multifaceted wunderkind has had an art exhibition and is also a published author. “She’s someone you cast for a campaign where the girls have a personality or a story,” says Weir.

MASHA N.
Marilyn
Age: 20
Runways walked: Gucci, Balenciaga, Chanel, Y-3, Valentino
Standout moment: With several campaigns under her belt, including D&G with renowned photographer Mario Testino, she performs like a pro. “She has an amazing walk, an amazing attitude, it’s like she just came already put together,” says Weir.

IRINA K.
IMG
Age: 16
Runways walked: Prada, Christian Dior, Jil Sander, Calvin Klein, Marc Jacobs
Standout moment:  She has an intangible quality that simply spells stardom. “She puts on the same dress that 20 other girls have put on and stands there on the same black carpet and everyone just goes, ‘Whoa.’” says Weir.

“Kasia and Irina really own what they do, they love the clothes.” – Jennifer Venditti, Founder and Casting director of JV8INC

“The girls Who are most successful in the end are professional and polite.” – Andrew Weir, casting director and owner of ACWWORLDWIDE.COM

“Some people evolve into it. Masha was already made, ready to go.” – Jennifer Venditti