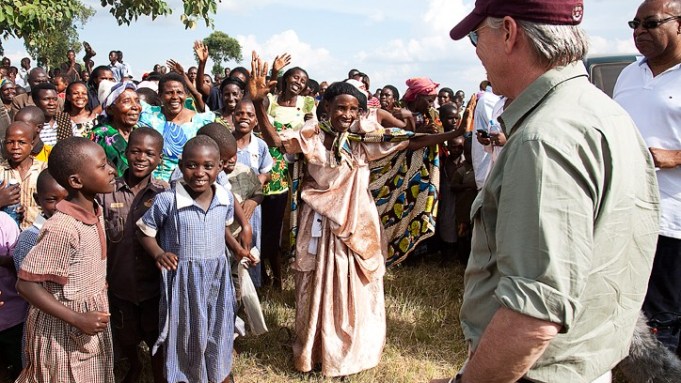 Tommy Hilfiger’s philosophy features something many think of as particularly all American — a focus on philanthropy.

In 1995, when the designer marked the 10th anniversary of his line, Hilfiger established the Tommy Hilfiger Corporate Foundation, which, in its original mission statement, was created to empower America’s youth by supporting education, physical well-being and cultural programs.

Since then, the scope of his charitable work has widened considerably. Hilfiger’s status as a bona fide altruist was cemented in June, when he was named the first global leader of the Millennium Promise program, Jeffrey Sachs’ initiative that aims to cut world poverty in half by 2015.

Looking back at his charitable history, Hilfiger says giving back has always been a goal, particularly since starting his business, and it contributed greatly to his drive.

“It was always my dream to make enough money whereby I could make a difference in young people’s lives,” Hilfiger recalled, when asked for his motivation in starting the foundation. “It’s somewhat self-satisfying because it is a thrill to see the difference being made. At the same time, both personally and as a corporation, donating a few dollars to your favorite charity and doing something substantial to make a big difference in people’s lives is something we should all do.”

Hilfiger knows a thing or two about this. Among the many causes he supports, his work for the Fresh Air Fund resulted in the creation of Camp Tommy for boys ages 12 to 15, featuring outdoor activities and educational programs to help literacy and career skills development.

Hilfiger also made a $1 million personal donation to build the Ernie Davis Community Center in his hometown of Elmira, N.Y. Other causes high on the designer’s list have included Pediatric AIDS, breast cancer and multiple sclerosis, and Hilfiger has been involved in the Nancy Davis Foundation for Multiple Sclerosis’ Race to Erase MS for more than 15 years.

His foundation also has an outreach program to help mentor students from homeless shelters. The designer often visits with children from the shelters, taking photos with them and encouraging them to pursue their dreams — and if those dreams include fashion, educating them about opportunities in the industry.

“We try to make a difference by showing them what the possibilities in the fashion business are,” Hilfiger said. “There are tremendous opportunities where one could work in the industry and love what they are doing and have a career.”

Hilfiger says that charity is a part of the company’s DNA.

“It’s not only that we want to be involved in helping children,” he said. “We also want to enhance the lives of others worldwide.”

With the help of Guy Vickers, who joined the foundation as president in 1999, it has transformed from a U.S.-centric organization to a global one.

The Martin Luther King Jr. National Memorial in Washington, D.C., has become one of the designer’s key projects. Hilfiger donated $5 million toward the memorial, which is under construction on the National Mall near the Jefferson and Washington memorials. It is expected to be unveiled next August.

Last year, Hilfiger’s corporate foundation pledged $2 million for the Millennium Promise, and this June, launched a five-year campaign to support the organization. Since being named Millennium Promise’s global leader, Hilfiger made a case on the program’s behalf at the United Nations Global Compact Leaders Summit in June. He made it his mission to help the organization build sustainable communities in sub-Saharan Africa, while raising awareness for the Millennium Villages project, a joint program of Millennium Promise, the U.N. Development Program and the Earth Institute at Columbia University.

“Millennium Promise is really the big global effort,” Hilfiger said. “We have a large team of people who are very interested in making a difference in extreme poverty and in the lives of many individuals.”

The foundation’s commitment focuses on the community of Bugongi within the Ruhiira cluster of villages in rural Uganda, which Hilfiger recently visited. He said seeing the extreme poverty there was a life-changing experience.

“People have to walk sometimes between 25 and 35 miles a day just to get water,” Hilfiger said. “They can sometimes only make one meal a day. Over 50 percent of babies born never make it. It’s devastating.”

The designer’s commitment to Millennium Promise also involves Hilfiger employees, who are being offered the opportunity to travel to Ruhiira to personally contribute to the cause.

“Going global was a dream for some time, and now we can really get our employees involved,” Vickers said. “We are just beginning with the Millennium Promise. I hope that by the end of the five years, we will look back and say, ‘here’s what else we can do.’”