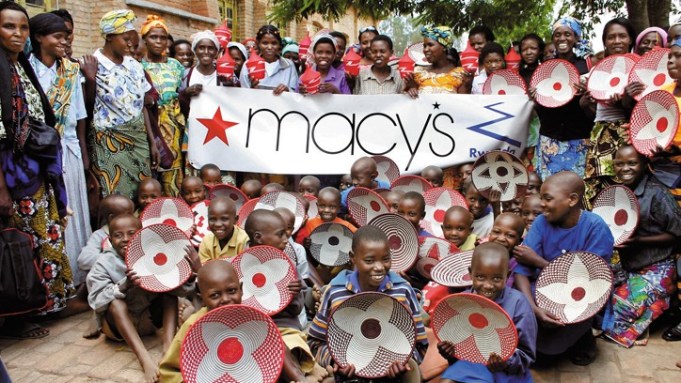 For Susan Kronick, the magic of Macy’s is all about its people.

And for the Macy’s Inc. vice chairman, who oversees the Macy’s and Bloomingdale’s divisions and a total of 166,500 employees, there’s a lot of potential in the retailer’s workforce.

“Talent is the lifeblood of our company and we are blessed with fantastic people—and that has not happened by accident,” says Kronick. “If you look at the number of people who have been with Macy’s and their career curve and their longevity, there’s defi nitely something in our water here.”

That “something,” says Kronick, who joined Macy’s predecessor company, Federated Department Stores Inc., as an executive trainee at Bloomingdale’s 35 years ago, is a multifaceted approach to developing talent. “It starts with the kind of college recruiting we do,” she offers.

Principals of the company are involved with recruiting and identifying talent on campuses, and once newcomers join, there is extensive follow-up. The buyers and divisional merchandise managers get a week of leadership and other training. And, rather than being onetime events, training sessions end with a set of assignments, and trainees subsequently meet with their supervisors to go over their progress. “The senior management in our company is deeply active and participates in this,” says Kronick.

Macy’s also tries to move employees up the corporate ladder, using a promote-from-within ethic that focuses on talent that’s been developed internally.

There is also an emphasis on developing cross-functional expertise—product people who know the business end and vice versa—a line of thinking with which Kronick has personal experience. After spending 17 years in merchandising and marketing roles, she moved to the operating side, including positions such as director of stores and chief operating offi cer. She’s had 16 different assignments during her tenure.

Experience on both sides of the retail fence gives a better perspective on what is needed overall. “Making good business decisions requires a holistic view,” she says.

So where does all this training point the young Macy’s executive? To the customer—an emphasis that might seem obvious now, but was apparently less so relatively recently.

“Today, I think you have to have a deep belief in the voice of the customer,” says Kronick. “When I grew up in the business, people were perhaps a little more focused on themselves.”

Given the hypercompetitive retail scene —with discounters flexing their muscles and specialty chains carving out niches —Macy’s and its executives are going to have to stay on their toes to maintain growth. One of the company’s top challenges —or opportunities, depending on one’s perspective —is how to be a big national brand that still connects to shoppers in their own environments.

“Our journey right now is executing in a local way,” explains Kronick. “In the end, retail, like politics, is local. It’s about individual customer experience.”

The company’s new My Macy’s initiative tackles this by, among other things, making sure stores in Miami carry more bikinis than those in Minneapolis.

“Our My Macy’s effort is all about localizing so that the product and the experiences will be unique and relevant and that they will distinguish us from the competition,” notes Kronick.

Reaching shoppers where they live and following through on all the retailer’s advertising takes some savvy customer service.

“People connect to our brand initially through our marketing and our events, but they also connect because they’ve seen Nancy behind the Clinique counter for the last fi ve years and Nancy takes care of [them],” says Kronick.

But meeting the promise of a brand in the stores is an area of constant effort for all retailers.

“We’re working on it; we’re learning a lot,” adds Kronick. “We don’t deliver it every day consistently, but with My Macy’s, that’s exactly the objective.”

To keep up with the customer, retailers need to be ready to adjust.

“You need to be incredibly open and flexible,” she says. “The world is changing faster than ever. You have to be careful that you never fossilize.”

The pace of change also is forcing executives to be sure-footed. “You need to be very decisive,” she says. “If you’re not, given how fast things move, you’ll just miss opportunities.”

Accordingly, the chain works hard to switch its approach to give shoppers new looks, such as the exclusive on Tommy Hilfiger fashions for fall.

Macy’s also is opening a new affordable contemporary sportswear department in 100 stores targeting twentysomething women learning to balance work and life. Kronick says the department will address a customer similar to that of H&M, but with better-quality merchandise.

One as-yet-untried frontier for Macy’s is growth abroad—something few American broadline retailers outside of Wal-Mart have done to any significant degree.

“We’re studying the potential for international expansion,” says Kronick. “We’ve got a lot to learn.”