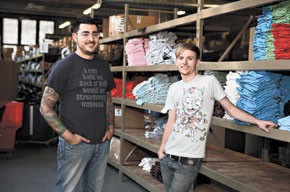 But then again, that’s because the thriving T-shirt company, which allows its threadless.com online audience to vote on new T-shirt designs, has built an estimated $17 million brand by positioning itself as somewhat of an antibrand.

Its premise is this: Artists submit potential T-shirt designs to threadless.com, which receives about 1,000 designs weekly; some 600,000 registered users rate the designs to create the top 100, and from those, a group of Threadless employees select 20 designs to print. Each week, the company releases nine shirts, seven new designs and two reprints in limited runs of about 1,500, costing $12 to $25 apiece.

To grow organically, Threadless encourages participants to do its marketing, with graphic artists telling their friends, hoping to garner votes for their designs, and customers gaining credits for linking to its site on blogs or posting their own photos wearing a Threadless T-shirt.

No wonder Jake Nickell, the company’s 27-year-old chief executive officer, said Threadless doesn’t believe in conventional advertising. “Our customer would be disappointed if we took out an ad,” Nickell said.

The success of Threadless hinges upon the involvement of its online community, assembled mostly through word of mouth, or rather word of Web, with bloggers and Web site links playing a key role. “People enjoy being part of the community,” Nickell said. “People become friends.”

“A lot of times when you’re buying clothes, it’s about the brand,” Kalmikoff noted. “For us, it’s really interactive. It’s more about the artwork than the brand.”

The brand name appears only in the shirt’s tag along with the artist’s name. Winning artists, meanwhile, receive $2,000 and a $500 gift certificate for each design selected. The most popular designs include “Flowers in the Attic,” featuring a woman who has shot herself in the head releasing a collection of butterflies, and “Communist Party,” a red T-shirt depicting Communist leaders such as Joseph Stalin and Fidel Castro drunk and wearing a lamp shade.

The company’s merchandise has grown from short-sleeve and long-sleeve T-shirts to hoodies, which cost $40. New additions include children’s T-shirts, $17, and infant onesies, $20. Not surprisingly, its largest customer base comes from the 13 to 25 age group, with London as its largest market initially. As word spread, New York took over the top spot, with Chicago just recently edging out the City That Never Sleeps.

Nickell credits growth in the Windy City to the opening of the first Threadless store in the Lakeview neighborhood. The 1,700-square-foot, bamboo-floored, bilevel space with blue reusable shopping bags mostly draws customers who have never heard of Threadless but notice the store’s front window spotlighting that week’s shirts beneath computer screens showing a customer’s face as its head. The faces rotate as new customers take their Web-cam pictures inside.

Threadless began in 2000 when Nickell and Jacob DeHart met on an online art forum, where Nickell happened to submit a winning T-shirt design. The two former e-commerce Web site builders fashioned that idea into a company that posted annual sales of $20,000 in 2001 and $6.5 million in 2005. Although the pair no longer officially discloses the company’s sales figures, estimates are reported at $17 million, with revenues generally at least doubling each year. The company operates 15,000 square feet of warehouse space and produces 80,000 to 90,000 shirts a month, Kalmikoff said. The next Threadless store, meanwhile, likely will open in Boulder, Colo., where Nickell and Kalmikoff plan to move next year.

The company recently sold a minority share to New York-based Insight Venture Partnership, which has helped set up a distribution partnership in England to ship all Threadless European orders.

Not that all Nickell and DeHart’s projects have been so fruitful. Its parent company, SkinnyCorp, under which Threadless falls, also launched an unsuccessful music concept where musicians submitted tracks to be rated by online users. They are, however, expanding another concept company, Naked & Angry, in which its online audience rates tiling patterns with top-rated patterns set to decorate neckties, wallpaper, umbrellas, everyday dishes, sheets, handbags and other items.

“It has more potential [than Threadless] because it’s everything,” Kalmikoff said.