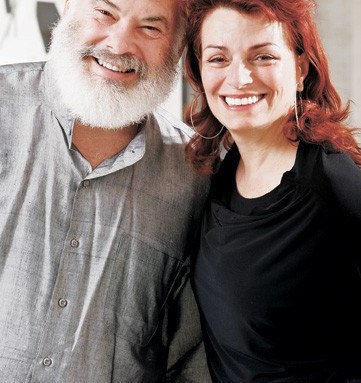 What do wellness Guru Andrew Weil and Seventh Avenue icon Norma Kamali have in common? A passion for healthy eating, aging gracefully and, oh yeah, the farm bill. As they chat over turmeric tea, we listen in…

Intrigued by the work of integrative medicine pioneer Andrew Weil, whom she met at the Miraval resort in Tucson, Ariz., fashion designer Norma Kamali began educating herself on healthy living. Here, she discusses today’s pressing beauty issues with the doctor.

NK: Fashion people don’t always think about beauty as an inside-out kind of thing. They think about what we can apply to make us look gorgeous. Obviously you have a lot of information that would tell us otherwise.
AW: Beauty has two foundations. The first is health, because beauty reflects good health. Secondly, to me, beauty has to do with your relationship with yourself. I’ve seen many people who do not meet the conventional standards of beauty who nonetheless I still find very attractive. And when I think about what it is that is there, it is some inner quality. The way that they think about themselves—what they project.

NK: Staying on beauty for a minute, were there any surprises for you in the process of product creation when you worked with Estée Lauder for the new Origins line?
AW: This was an interesting experience for me. I proposed to Origins a philosophy for this line of products and then I suggested ingredients.  And they developed prototypes and we went back and forth over them for about a year and a half. There are a lot of considerations that I didn’t realize. But I must say that since then, I’ve had a number of other companies coming to me. I think with Origins every ingredient had to be checked out to see not only if it was safe but that it met all these [organic] standards. I was really surprised by the number of regulations that had to be met.

NK: Where do you think the whole aging thing is going?
AW: The antiaging movement is really powerful right now. But I think more and more people are going to see through that and I hope that the trend will be toward healthy aging rather than antiaging. I do think the Baby Boomers are going to demand to know other ways at looking at aging. I already hear a lot of people in that group saying how they’re never going to let themselves wind up in conventional senior facilities; that they’re going to think about designing where they’d like to live. So I think that’s all going to change.

NK: How do you feel about the way people approach aging now with anything from topical things to surgery?
AW: I think antiaging is the wrong approach. We can’t stop the aging process. We can’t reverse it. You know what we should be concerned about is maintaining health as we go through life. The first step of that is embracing aging and realizing that there are things that get better as you get older—not everything gets worse. When I was in Okinawa, Japan, I saw these very old people, people in their late 90s and centenarians. They look different from old people in our part of the world and I think the main reason is that they’re happy and they’re loved and they’re not ashamed of being old. They are considered living treasures and the whole community makes efforts to include them in all activities. These islands have the highest concentration of centenarians in the world and there’s a lot of research going on there on healthy aging. Something that caught my eye is that they drink very frequently cold, unsweetened turmeric tea. It is a powerful anti-inflammatory and anti-cancer agent and looks to protect against Alzheimer’s disease also. That’s why I partnered with Ito En to bring it here. There’s a very different cultural value placed on aging in Okinawa than what you see here and I’m afraid that the fashion industry along with the media and entertainment industry bear a lot of responsibility for that.

NK: I know you were trained as a doctor and then found some point in your life that there were other ways to treat people.
AW: Actually, I was interested in [alternative health] before I went to medical school. I have a lifelong interest in plants that I got from my mother that led me to be an undergraduate botany major and started me on experiences with medicinal plants. I began reading about alternative medicine before I went to medical school. And when I finished my medical training, I felt that I had learned almost nothing about how to prevent illness and how to keep people healthy. I spent a number of years traveling around the world doing practices in other cultures and working with alternative practitioners and I gradually put together my own blend, which I first called natural preventative medicine before I ended up calling it integrative health care.

NK: The whole idea of fitness, health and wellness is really popular right now and it’s a trend that you saw a long time ago that just wasn’t ready to catch on in a big way. What do you think was the big turning point?
AW: I think it’s been a gradual, tipping point of culture for decades. I think one of the motivations behind it is that people want to be more empowered, more in charge of their own destiny. I think, especially in medical situations, they don’t want to be passive recipients of authoritarian internalistic care. And things have changed a lot. When I think about when I was a kid, my family doctor, who was a general practitioner, wrote prescriptions in Latin, which was done to prevent you from understanding what was there. And you never asked a question about what this was or why you had to take it. Think about how much that’s changed.

NK:  How do we make it easy for people to join in; to drink the Kool-Aid?
AW: Learning the principles of healthy eating is not complicated. You sent me some great olive oil that you’re distributing. First-pressed extra-virgin olive oil contains an antioxidant similar to those in green tea and red wine. I had a lot on a salad last night, and I eat olive oil every day. Make it a habit.
Another issue I’m involved in is the Farm Bill and Food Policy. As hard as it is to believe, there are very powerful interests out there that don’t want you to know where your food comes from. And I think the more we read about contaminated products coming from places like China for example, the more important it is to know where our food comes from. So I think that’s a good bandwagon to get on to make sure we get this country-of-origin labeling law passed. And with cosmetics, people are becoming aware that there are ingredients in many cosmetic products that aren’t good, such as parabens, artificial colors and dyes that can be absorbed through skin.

NK: Please tell everyone about the Farm Bill.
AW: Every five years Congress drafts and passes a huge piece of legislation that affects all of our lives and it’s misnamed the Farm Bill. It actually is the food and foreign policy bill. Its provisions really determine our food choices and the economic and social health of a huge stretch of rural America. As a doctor who has been very concerned about how the food we eat impacts our health, I was ignorant of this until a few years ago. My concern is that so many people in North America now are eating these highly refined and processed foods that contain unhealthy ingredients such as high fructose corn syrup and refined soybean oil. The reason these ingredients are cheap and the reason they are in all these foods is that the Farm Bill mandates federal subsidies to these crops and it artificially drives down their prices. But there are no subsidies for fruits and vegetables. So if you go into the supermarket, the most expensive items you can buy are fruits and vegetables. And the cheapest are all these low-quality foods. The materials that are used to make clothing is also a concern in terms of sustainability, impact on the environment, impact on health, and I know this is something that you’re interested in.

NK: The fabric world is just very explosive right now. Everybody knows they should be green. Right now there is this industry surge in using bamboo and soy and corn. I’m starting to use this fabric that’s made of corn compound.
AW: Another question is how the cultivation of these crops that produce fibers impacts the environment. Cotton is an example. It’s great to have organic cotton—I love it—but when you look at the way cotton is produced in many areas of the world, even in Arizona where I live, it’s a huge water user that requires lots of applications of pesticides. So I’ve embraced bamboo and new fibers being produced from bamboo.

NK: How can people get involved?
AW: Find out who your congresspersons are; write your senators and tell them you are concerned.