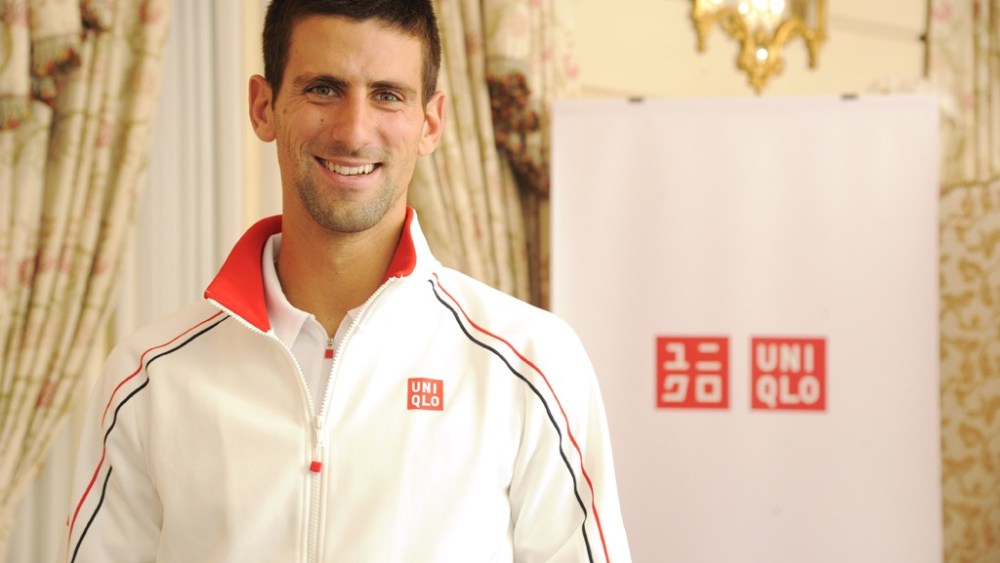 PARIS — Novak Djokovic is about to take a monobrand approach to dressing.

Japanese fast-fashion retailer Uniqlo has appointed the world’s number-one male tennis player as its global brand ambassador in a five-year deal that will see him wearing the brand both on and off the court.

Djokovic will wear his new Uniqlo kit for the first time at the French Open tournament at Roland Garros here, which kicks off on Sunday. The Uniqlo deal puts an end to his relationship with the Italian sportswear company Sergio Tacchini.

“We will use the most innovative fabrics and technologies to develop match wear for Djokovic,” Tadashi Yanai, chairman, president and chief executive officer of Uniqlo’s parent company, Fast Retailing Co. Ltd., said at a press conference at the Ritz hotel in Paris.

“At the same time, Uniqlo will incorporate the latest fabrics and technologies to codevelop with him the ultimate functional apparel that can be worn, and enjoyed, by people all over the world,” Yanai added.

The executive declined to disclose terms of the deal, adding that he did not know when the new clothing line would hit stores. Uniqlo stated that the first item would be a custom-designed UT T-shirt, proceeds from which will be donated to the Novak Djokovic Foundation to support children’s programs.

The tennis player hit the catwalk to show off his new kit, designed by Uniqlo creative director Naoki Takizawa, formerly creative director at Issey Miyake. It consists of a white pair of shorts, polo shirt and zipped jacket with blue and red stripes inspired by the flag of his native Serbia.

Takizawa, who flew to Monaco twice for meetings with Djokovic, said the outfit was designed to enhance his performance. “I feel that physically and mentally, he has perfect balance,” Takizawa told WWD. “I try to be supportive of that.”

Djokovic said he hoped the partnership with Uniqlo would bring him luck at the French Open, the only Grand Slam event he has never won. “I’m really happy with the way I’m playing right now, I’ve been raising the level of performance every tournament and every match,” he said.

The player said he would be starring in advertising campaigns for Uniqlo, and expects to have significant input into designing functionalwear for the retailer.

“Uniqlo has allowed me to take a part directly in designing all the lines and all the clothes,” he said. “I feel that a player’s input and opinion are very important in order to achieve the best possible collection, and get out in the court and feel good in what you’re wearing.”

In an interview with WWD, Yanai said he was confident the company would meet its most recent guidance for the full year ending Aug. 31. He added that Fast Retailing remains on course to achieve its 2020 targets of sales of 5 trillion yen, or $62.76 billion at current exchange, and 4,000 units, which would make it the world’s biggest apparel retailer.

“There is a possibility of achieving that goal in 2020 without mergers and acquisitions, just through organic growth,” Yanai said, although he did not rule out the prospect of future acquisitions.

“We would be interested in a company, if there were one that shared the same thinking as us, and if the timing were right, but unfortunately we have not come up with any candidates,” he said.

He noted that the company’s flagship on Fifth Avenue and its original New York store in SoHo were both seeing positive sales growth. But sales at the world’s second largest Uniqlo, a 64,000-square-foot unit on West 34th Street in Manhattan, have been weaker than expected, he added.

“People who come to 34th Street are more price conscious, and so we are thinking of steps to address the problem,” Yanai said.

Uniqlo remains committed to the U.S. market and plans to open about 30 stores in and around New York within the next two or three years, mainly in shopping malls, he said. Its first mall presence will be a 43,000-square-foot unit at Westfield Garden State Plaza in Paramus, N.J.

The first Uniqlo in the Philippines is set to open in June, and the company is in negotiations to enter Indonesia and Australia. Fast Retailing is also mulling overseas openings for its g.u. brand, a cheaper companion label to Uniqlo.

“We do have plans to take g.u. abroad in the near future, but we don’t know yet whether it’s going to be in the U.S., Europe or Asia,” Yanai said. “Unfortunately, the economy is not good in the United States, or Europe, or Japan, and therefore a lower pricing does seem to attract more attention.”

The collaboration with Djokovic is part of Uniqlo’s strategy of expanding its existing offerings to incorporate more technical elements, in line with its best-selling Heattech items.

“If we want to grow further as a company, we have to come up with something that goes beyond sportswear and casualwear. We are very much focused on casualwear, but we’d like to further develop the functionality of sportswear and feed that into our casualwear,” Yanai said.