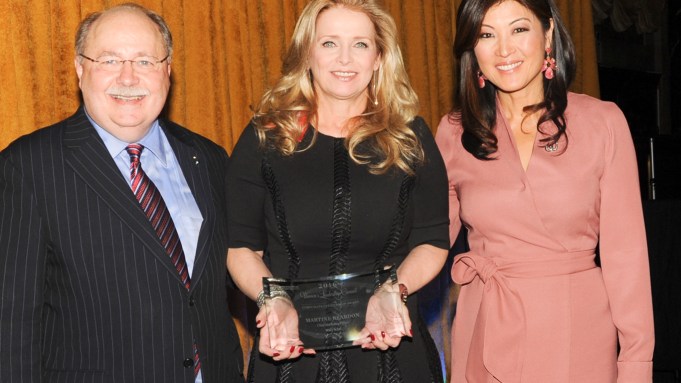 “Wow. What an amazing group of incredible women we’ve recognized today,” said Martine Reardon, Macy’s Inc. chief marketing officer, as she gazed over the crowd of 600 at Cipriani 42nd Street at the end of Wednesday’s “Power of Women to Make a Difference”  luncheon.

“I feel empowered just to be standing among them. Personally, I have been lucky to have been empowered by my mom, who helped me have the confidence to believe in myself. At Macy’s, empowerment means allowing myself and my team permission to take risks, to be courageous, and to not be afraid to fail,” Reardon said.

The event was highlighted by a parade of models wearing the spring collection from Max Mara, among the event’s sponsors; the commencement of a weeklong “power of the purse” online auction of luxury handbags from Chloé, Gucci, Max Mara and other designers, and Michelle D. DeFeo, president of Laurent-Perrier U.S., the Champagne company, leading a toast.

Organized by United Way of New York City’s  Women’s Leadership Council, the luncheon raised $935,000 and was expected to top $1 million through further donations and the auction. All the proceeds benefit ReadNYC, an initiative to boost literacy and improve educational outcomes for low-income New Yorkers by focusing on grade-level reading.

“Do you guys feel the power in the room?” asked Sheena Wright, president and chief executive of UWNYC. “Seventy-five percent of those who haven’t learned by the third grade to read up to your level won’t graduate high school. It’s the biggest predictor of not being able to graduate.”

Amaya Garcia, a first-grader who improved her reading skills through ReadNYC, was presented with a gift from Macy’s and tickets to the next Macy’s Thanksgiving Day Parade. She said her favorite book was “Chrysanthemum,” about a mouse who gets teased about her long name.

Aside from Reardon, who received the corporate citizenship award, the event honored Monique Nelson, chair and ceo of UniWorld Group;  Laurie M. Tisch, president of the Laurie M. Tisch Illumination Fund; and Jennifer Warren managing director of the U.S. region of the Canadian Imperial Bank of Commerce. Juju Chang of ABC’s “Nightline,” served as host.