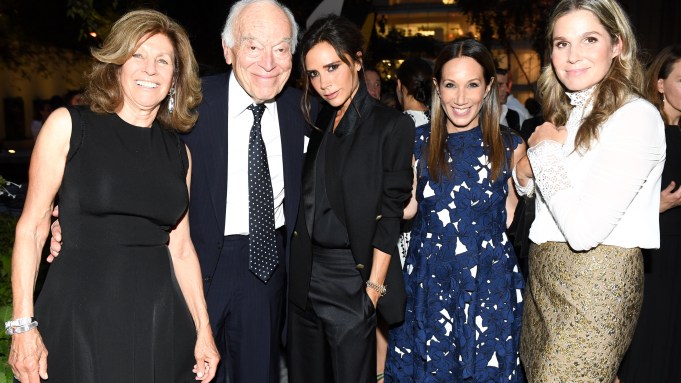 The spice girl-turned fashion designer-turned makeup mogul hoisted her extra-long trousers off the ground and  pranced her platforms right on through to her congratulatory cohort of party-goers at Aerin Lauder’s Celebrate the Beauty of Fashion party in the courtyard of the Museum of Modern Art. The aforementioned puddle was born from early-evening wine spills, which the wine glasses repeatedly survived.

Beckham’s makeup collection for Estée Lauder doesn’t go on sale until Sept. 13, but some of the items are likely contenders for the makeup looks at her fashion show Sunday morning. The final decision will be made at the makeup test for the show, which is said to be happening Thursday.

“We’re here tonight to celebrate fashion week,” said Aerin Lauder. “Estée always believed in creativity passion dedication and excellence and that’s very much why we’re in the garden tonight,” she continued, introducing Ronald, honorary MoMA chairman. “The thing that makes the Museum of Modern Art so special is that since 1929 when it opened up it has a great effect on fashion, starting from its early shows,” he said.