Executive discusses working with Allen Sirkin, whom he has known for a quarter century. 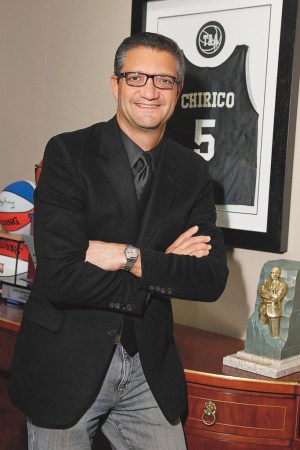 “He’s the heart and soul of the heritage business,” said Emanuel Chirico, chairman and chief executive officer of PVH Corp. of the retiring Allen Sirkin. “We call him ‘the king of dress shirts.’”

The two executives have known and worked together for a quarter century, first meeting when Chirico was with Ernst & Young as PVH’s outside auditor. “I knew him for about five years before I joined the company. I was the outside consultant, and Allen was running the entirety of the wholesale group as vice chairman,” recalled Chirico.

In 1993, Chirico joined PVH as controller and in 1999 was promoted to chief financial officer, again working closely with Sirkin under then-chairman and ceo Bruce Klatsky. Chirico and Sirkin were both on the operating committee of the company then. “We had a lot of interplay right from the beginning. We were constantly working together on the positioning of the company,” said Chirico.

In 2005, Chirico was named president and chief operating officer of PVH. Eight months later, he was elevated to ceo after the surprise exit of Mark Weber — who is now chairman and ceo of Donna Karan International and ceo of LVMH U.S. — from that position. “As you might recall, when I became the ceo it wasn’t under the best circumstances. It wasn’t as fully planned as we would have liked,” said Chirico. “I had to make a decision who would sit in the [president and coo position] and it was a very natural decision that Allen would sit in that chair.”

Chirico noted that the two executives’ skill sets are complementary, with himself experienced in operations and finance and Sirkin excelling in sales, marketing and product. “It was a great marriage from that point of view,” pointed out Chirico.

Apart from that harmony of talents, Chirico also admired Sirkin’s approach to the job, during a time when several executives were vying for the role. “I wanted to give myself some time and not rush into a decision that was so important. A lot of people were in to see me, everyone was telling me what I should do,” Chirico recalled. “One thing that was not lacking was opinion about what would be best for the company.

“Allen was the only one who came in and said, ‘What do you really think you need? What does the company need from your point of view?’ He became more of a counsel,” said Chirico. “He wasn’t in there politicking. That’s when I knew it was the right decision, given his maturity and how he approached it.”

Under Chirico, Sirkin concentrated on the company’s heritage brands division, which encompasses brands that were owned — Izod, Arrow, Van Heusen, Bass and Eagle — in addition to the licensed dress shirt and neckwear businesses. “Allen has really driven sales, particularly on the wholesale side of the business, given his relationships with key retail partners like Macy’s, J.C. Penney, Kohl’s, Dillard’s and Belk,” said Chirico. “Allen has been front and center with those relationships.”

Sirkin also played key roles in the acquisitions of Tommy Hilfiger in 2010, Superba in 2006, Arrow in 2004 and Izod in 1995. With the Hilfiger deal, Sirkin attended the first meeting of PVH executives at Tommy Hilfiger headquarters in Amsterdam and took part in the due diligence process.

“We were selling ourselves to the Tommy Hilfiger team as much as they were selling to us,” said Chirico. “The two teams really had to work well together, and Allen’s style and his experience and the way he carries himself was a big part of getting us through and making the Tommy team feel comfortable about our business and management structure.”

Chirico called Sirkin a “right brain” thinker, or holistic and intuitive, while he himself is more “left brain,” or linear and logical. “Allen is not a micromanager. He’s a very big-picture guy and strategic,” explained Chirico. “When he’s thinking about the marketing dynamic, I’m thinking about EBITDA.”

Sirkin is not being replaced at the company, but rather his responsibilities are being split between Ken Duane, ceo of wholesale apparel, and Michael Shaffer, chief financial and operations officer.

Personality-wise, Chirico pointed to Sirkin’s calm, unflappable demeanor as an effective counterweight to his own volubility. “Allen never gets flustered. I can get loud and can wear my emotions on my sleeve,” admitted Chirico. “Allen is always a calming effect. I’ve seen it in numerous cases in a negotiation or deal. He’s able to take the tension out of the room and get the deal done. He doesn’t take any of it personally, it’s business — like the Godfather said.”

Sirkin was particularly pivotal to the negotiations that brought leading neckwear maker Superba Inc. into the PVH fold six years ago. The deal almost fell through due to disagreements on price, said Chirico. “There were a couple of times I just didn’t think it was going to happen, if it weren’t for Allen pulling it back together and getting us and the management of Superba to focus on what we both wanted to accomplish,” he noted. “Allen is good at articulating both sides and bringing everyone together. He can take complex issues and bring it to a point where everyone can understand them.”

Chirico credits Sirkin with basically inventing the licensed dress shirt model that propelled PVH into the leading position in that category, along with a similar model in neckwear. At last year’s annual meeting, Chirico noted that PVH commands a 47 percent share of dress shirts in department and chain stores and over 50 percent of all ties sold in the U.S.

“When he joined the company we were basically the Van Heusen dress shirt company, with some private label brands,” said Chirico, noting Sirkin was instrumental in securing the raft of licenses that drives the business today.

“As the business has morphed and changed, he’s changed with it,” said Chirico. “We used to be 60 percent produced in our factories in the U.S. Today, 100 percent of our shirts are imported from overseas, coming in from the Caribbean, from Southeast Asia, the Middle East.”

Looking back at the decades he has worked with Sirkin, Chirico pointed to the acquisitions of Calvin Klein and Tommy Hilfiger as game-changers that transformed PVH. Prior to buying Calvin Klein, PVH was “a well-operated, moderate men’s apparel company” principally operating in the U.S. Following that deal, the company became “an international purveyor of a major brand,” said Chirico.

The Tommy Hilfiger deal accelerated PVH’s metamorphosis into a portfolio company, adding a European operational platform to its assets. “It took us to the next level. We weren’t just operating through a licensing model overseas [as with Calvin Klein.] Now, we are directly operating businesses in Europe and Asia,” Chirico pointed out.

The Calvin Klein and Tommy Hilfiger businesses are growing four times faster than the heritage division, said Chirico and together ring up more than 80 percent of the company’s profits today.

The Tommy Hilfiger business is expected to be flat to up 2 percent while Calvin Klein is projected to grow 5 to 7 percent.

Chirico said moderate, main floor sportswear businesses like Izod have been under pressure, with costs up in excess of 15 percent last year and an overinventoried position making it difficult to raise prices. “Izod really took it on the chin last year,” he noted.

At times, the heritage businesses that have been overseen by Sirkin can be overshadowed by the heft and glamour of the two megabrands that now dominate PVH’s holdings. However, Chirico is quick to point out that the heritage dress furnishings and sportswear businesses long provided the company with a sturdy foundation and steady cash flow. Some Wall Street analysts have floated the idea that PVH could win a higher valuation multiple if it spun off or sold its less fashionable, more stolid heritage division — but Chirico dismisses the notion.

“If it wasn’t for the cash flows and the consistency of the heritage business, we wouldn’t own Calvin and Tommy today. I like the balance that the businesses bring to the more fashion-forward Calvin and Tommy brands,” said Chirico. “When the world was going through some really tough times in 2008 and 2009, the piece of our business that kept performing was our moderate, heritage brands. Consumers kept coming back, and we kept generating significant cash flow there.”

The heritage business provided a well-oiled operational platform to leverage the Calvin Klein and Tommy Hilfiger businesses on, boosting growth for those two brands, added Chirico. “We have a platform in North America that is second to none in terms of operating, sourcing, logistics and systems, and we delivered the benefits to those brands,” he noted.

What’s more, PVH works with its department store customers as a single company, with Tommy Hilfiger, Calvin Klein and its multitude of owned and licensed heritage brands, which gives added leverage to the full spectrum of those businesses. “Just the sheer size of the men’s side — with most of our major retailers we are the largest men’s supplier that they have — gives us a strong position with them and makes us important to them,” said Chirico.

Next year, PVH will take back its European ck Calvin Klein bridge business from Warnaco, and Chirico believes it can become a $500 million business. PVH is layering the ck Calvin Klein business onto its European Tommy Hilfiger platform, which already operates an infrastructure of showrooms and merchandising and marketing teams in all the major European markets.

In Europe, Asia and South America, ck Calvin Klein is the core brand marketed by PVH while in North America it’s the Calvin Klein white label better sportswear brand, with the latter priced somewhat lower than the former.

Looking forward at potential acquisitions now that Tommy Hilfiger has been integrated and the balance sheet delivered ahead of plan, Chirico said the banking environment is conducive to deals but the wobbly global economy remains a drawback. “Any kind of disruption, geopolitical or economic, I think could put pressure on consumers, and they will pull their spending back. When running a large company, you want to be aggressive, but you also have to be cautious about protecting the assets of the company,” he explained. “It’s a tough environment to make judgments about how aggressive to be.”

An ideal acquisition by PVH would bring with it a potent operating platform in Asia or South America, to complement its strong positions in North America and Europe, emphasized Chirico — a global goal that hasn’t yet been achieved by any apparel maker. “There is nobody in the industry that can say that today and I’d like to be in a position to say that we have that,” he said.

“Bankers are always coming in, bringing ideas and opportunities. You’d be amazed at some of the crazy ideas they come up with,” said Chirico. “They might be nice companies — but how do they fit in with what we do? It’s not just about buying something that will be accretive to earnings but about how it fits into the whole pie.”