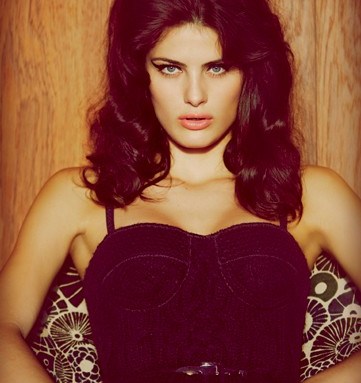 While shooting the Pirelli Calendar two years ago in Botswana, photographer Peter Beard tried to coax Isabeli Fontana into placing a 3-inch, hairy-legged, long-antennaed bug just below her left eye.

But she did, and the shot, according to casting director Jennifer Starr, who was there, was “brilliant.” It’s this that has catapulted Fontana to the very top of the modeling ranks. “She’s just an incredible model,” says Starr. “She’s fearless.”

Fontana burst onto the modeling scene after competing in the Elite Model Look contest at 13. By 16, the Brazilian-born beauty had been tapped by Victoria’s Secret. Now 27, Fontana has successfully achieved what few others have been able to: She’s become that rare crossover success story, appealing equally to modeling’s mainstream and high-end fashion camps. In the last year alone, she’s walked the runways for Chanel, Givenchy, Hermès and Victoria’s Secret; appeared in editorials for American, French and Italian Vogue, among many others, and featured in ad campaigns for Gap, Saks, Roberto Cavalli and Cesare Paciotti. “Isabeli really does cross over, and traditionally that doesn’t happen,” Starr says. “But she’s great in pictures and she looks as good in clothes as she does in a bathing suit. That’s hard to accomplish these days.”

Despite appearances—seven tattoos and an interest in Goth—the supermodel has a serious soft side. With cheekbones so sharp they look sculpted from granite and curves that could have been molded by Botticelli, she is gregarious, outgoing and engaging in person. At the forefront of maintaining her profile in the digital era, Fontana is an avid tweeter who’s keen on sharing a little more of herself with her fans than photos otherwise allow. “I want my fans to see that I’m a real person like them,” she says. “They think I’m a diva, that I’m unreachable. And I show them that I’m not, that I’m like them. I have good days and bad days. I’m normal. I’m a human being.”

The key to her personality may very well be the crab inked on her wrist. Born on July 4, Fontana’s astrological sign is cancer, whose primary traits include loyalty, family attachments and sensitivity. In a world where thick skin is needed, the latter can make being a model tough. “Some people can be mean and it’s hard,” Fontana admits. “But you can’t let people hurt you. You have to protect yourself.”

Her newest tattoos mark the major events in her life. Set between her shoulder blades, her eldest son’s name, Zion, 7, floats toward her neck, lifted by two wings. Just above her left elbow, a red-and-orange, devilish-looking teddy bear blazes above the name of her second son, Lucas, 3.

Admittedly, motherhood has softened her, both as a person and as a professional. “After you have your baby,” she says, “you feel love. Love becomes a strong word and a strong feeling. I like to live positively, to show that I’m happy, and I like to see those around me happy and smiling.”

To Fontana, her family, her home and the steadiness that they bring are the wellsprings from which all beauty flows. “I have balance,” she says. “That’s why my skin is good.” Even the tropical Brazilian sun works into Fontana’s beauty regimen, but with characteristic moderation. “I see the sun as a healthy thing,” she says. “I love to get a tan, but I always use sunscreen to protect against wrinkles and aging.”

Her outlook may very well add to her already considerable success. At a time when the bad behavior of some of the industry’s biggest names has led to a few too many headlines, Fontana’s down-to-earth attitude is refreshing. “She just gives so much to the camera and she’s genuinely a lovely person to be around,” Starr says.

Despite her success, Fontana isn’t one to rest on her laurels—though she is ready to slow down, if just a bit. “I’ve built a career,” she says, “so now I want to be more relaxed. I want to work less and I want to work for quality. I want to have a major contract in which I only do that. That’s what I would love.”

If her trajectory thus far is any indication, it’s only a matter of time. “Every year you think she’s at the top of her career and she just keeps on going,” says Starr. “She can do it all.”