The event raised about $1 million, drew a crowd of 400 and included a silent auction with products from more than 80 brands and retailers. 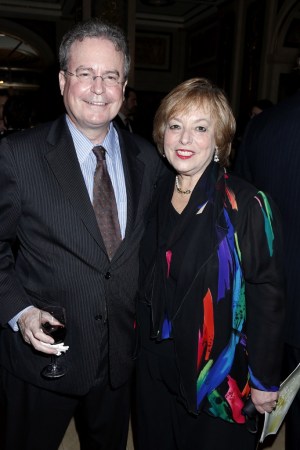 “There is something about the U.S. Most people are willing to help other people, and when they do, they feel better about themselves,” said Margery Kraus, the founder and chief executive officer of APCO Worldwide, the large communication and public affairs firm. “Just look at [Hurricane] Sandy. See how it’s mobilized people.”

Kraus was honored at the Volunteers of America New York Winter’s Eve gala at The Plaza on Monday night for decades of volunteerism that started when she was a Girl Scout helping the elderly. “My whole life has been defined by volunteerism. The spirit is embedded in the DNA of the company I started.”

The event raised about $1 million, drew a crowd of 400 and included a silent auction with products from more than 80 brands and retailers. In the ballroom, the large contingent of New York retailers and designers, among other guests, was awed by the sparkling centerpieces filled with chocolate, cookies, perfume, candles and Champagne, which sold at a bargain price of $150. Richard Motta, president and ceo of Volunteers of America-Greater New York, and Maxwell Feller, a recipient of the organization’s Youth Services program, were also honored.

In such areas as education, housing and retraining, where state and city governments can’t meet all the needs of everyone, Volunteers of America often lends support, noted Ron Frasch, Saks Fifth Avenue’s president and chief merchant, who was one of the three dinner chairs, along with Kathy Nedorostek-Kaswell and Roxann Taylor. “This is an amazing organization that truly gives back to our communities,” Frasch said.