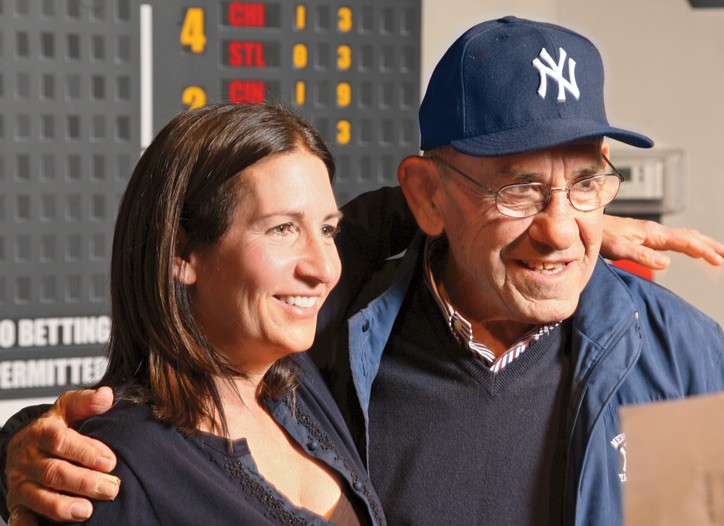 WWD doesn’t do many ground-breaking stories about star athletes, but it did one in May 2008 in Beauty Inc. with Yogi Berra, the great Yankees catcher. Who knew that he had developed a friendship with makeup guru Bobbi Brown? Jenny B. Fine did, and she caught up with Brown and with Berra —whose  brilliantly offbeat use of the English language was almost as famous as his athletic skills — and who died at 90 on Tuesday. Take a look back at the interview. — Lorna Koski

Makeup magnate Bobbi Brown and baseball legend Yogi Berra might seem unlikely bedfellows, but the two—both residents of Montclair, N.J.—are actually fast friends. When Brown was brainstorming ideas for her new lip balm, launching in June, a staffer suggested naming it Bare. She had a better idea and Yogi Bare the lip balm was born. Recently, WWD Beauty Biz sat down with Brown and Berra in the sportsman’s memorabilia-filled namesake museum to talk baseball, beauty and vodka on the rocks.

How did you meet?
Bobbi Brown: When my family first moved to Montclair, Yogi’s museum was still in the conceptual stage. Yogi and I have a mutual friend who invited us to her house for drinks. My husband and I went, and there was a beautiful box that was the future museum. They were looking for people to help bring it to life. We supported the museum from Day One.

Have you taught Bobbi a lot about baseball?
Yogi Berra: She’s probably learned a little bit.
B.B.: Golf is also very important to Yogi and to my family. Golf really teaches manners, so my kids have learned they have to be polite. My son Cody had a hole in one a few weeks ago.

Yogi, have you ever had a hole in one?
Y.B.: Yes, in my tournament. It didn’t count! I had to hit 150 balls though.
B.B.: Ask Yogi who his roommate was when he was a young man.
Y.B.: Bobby Brown. He was a doctor. He would read his medical journals while I read comic books.

So Bobbi Brown really is like deja vu all over again for you! Bobbi, what’s your favorite Yogi story?
B.B.: We were at a party at John McMullen’s house [the previous owner of the New Jersey Devils]. John said to me, “Yogi’s cheating on you.” Yogi said, “[My wife] Carmen got me this new stuff. I’m trying it, because your stuff is not getting rid of my wrinkles. I buy your wrinkle cream and it doesn’t work.” I said, “Yogi, you bought the wrong cream! Don’t buy the wrinkle cream. You’ve got to buy the antiwrinkle cream.”

Yogi, Derek Jeter also has his own line of beauty products.
Y.B.: Not as good as ours though!

How did the lip balm come about?
B.B.: The inspiration was Chapstick, because there’s no better icon than Yogi and Chapstick. We have tinted lip balms and we were talking about doing one without color. Someone said, “Let’s call it Bare,” and I said, “Why don’t we call it Yogi?”

Did you use lip balm when you were playing ball?
Y.B.: Never! This is the first one.

Has Bobbi taught you a lot about beauty?
Y.B.: She sends me a bunch of creams and I use them all.
B.B.: Yogi gives beauty tips in the Yankee locker room, and then the players call our p.r. department and ask for products. Joe Torre loves the stuff.

Yogi, What’s your best beauty tip?
Y.B.: Use anything that can help you.

What inspires each of you?
B.B.: Yogi has taught me how important it is how you treat the people who come up to you. Going out with Yogi, you can not imagine the people who come out of the woodwork and have to tell him every single story—“When I was six, my father….” Instead of being rude, Yogi says, “Oh yeah, I remember that.” He’s so kind to everybody. There are so many celebrities out there who don’t know how to be nice; there’s no one bigger or more famous than Yogi Berra and he’s the nicest of them all.
Y.B.: I do get mad.

Do you get mad when the Yankees lose?
Y.B.: No—someone’s got to win. I love to go to the games. I managed the Mets and I root for them, too.

Who do you root for when they play each other?
Y.B.: The Yankees, because I spent most of my life there. We won the pennant 14 times out of 17 and we won 10 [World Series titles].

Can they win this year?
Y.B.: They’ve got a good chance. The teams are all even. Everyone is looking for pitching. That’s the most important thing—pitching.

Bobbi, What else has Yogi taught you?
B.B.: To put a lot of ice in my vodka. Yogi has a doctor who says he can have—how many ounces a day?
Y.B.: Four ounces.
B.B.: But I told Yogi he needs a new doctor.

Bobbi, What’s your favorite Yogi-ism?
B.B.: “When you get to the fork in the road, take it.” One day I was driving home and I was at that fork, and I realized Yogi lived around the corner, and I was like, “That’s the famous fork!”