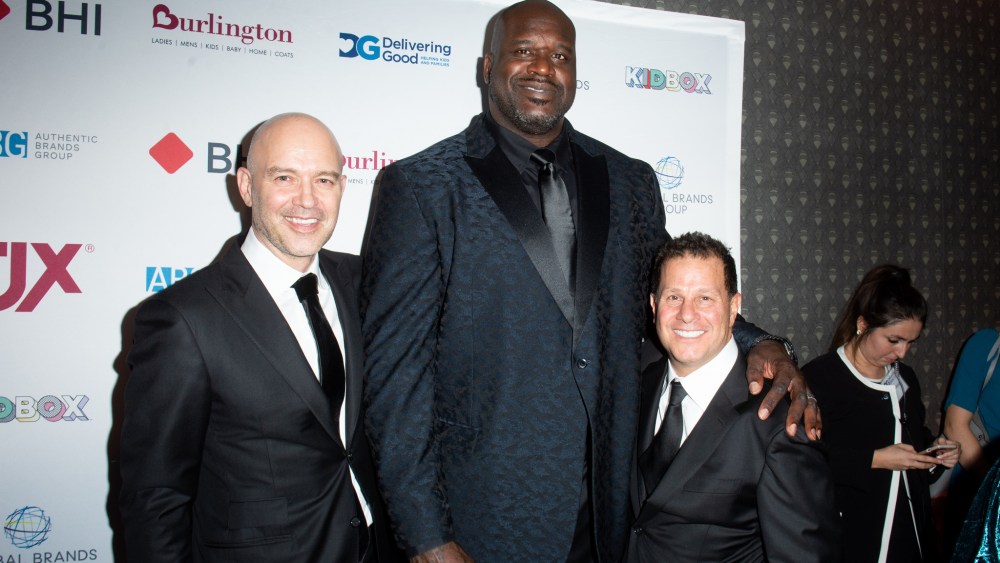 The basketball legend was there to present Jamie Salter, founder, chairman and chief executive officer of Authentic Brands Group, and Nick Woodhouse, president and chief marketing officer of ABG, with their awards, as both ABG executives are partners in O’Neal’s company. ABG acquired the right to manage O’Neal’s name in the merchandise and endorsement world in 2015.

“Shalom,” said O’Neal, starting to talk in Hebrew later at the podium. “I’ve been working with Nick and Jamie for three years now, and they’re the true definition of servant leadership. These guys always do give back. In other words, these two guys are Shaq-tastic.”

“First of all, things come in all sizes,” said Salter, standing next to the 7-foot, 1-inch O’Neal. “I have to wear big shoes at ABG to work with Shaq. This award goes to all the people in the audience, without the retailers, the wholesalers and all the people at ABG, this would not be possible.”

Woodhouse added, “The great Muhammad Ali once said, service to others is the rent you pay for your time here on Earth. That adage also taught me a new definition of the word ‘good.’ When I met those kids [who are helped by Delivering Good], I realized that what they think is good is a lot different than what a lot of people in this room think is good. Good to us might mean a nice dinner at Milos. Good to them might mean a nice dinner.”

In presenting the award to Repasch, Carson Kressley, the TV personality and actor, spoke about Repasch’s ability to swiftly turn around many businesses. “But most of all is her passion to give back to others, to be humble, to never settle for less and to encourage others to find the best in themselves.”

“We all know it all starts with us,” said Repasch. “I challenge you to dig deep, give back and be thankful for every day.…Every day you got to get up, you got to look in the mirror and you have to kiss those muscles,” she said.

Dabah said he was influenced to build a business with a mission at its core about giving back. For every box of product they sell at Kidbox, they donate clothing to Delivering Good. They asked parents to help them choose the charity so when the mom gets the box, she chooses a charity. “We found from the parents this was the first conversation parents had with their children about giving back,” he said.

The event raised over $1.8 million for the charity, according to Lisa Gurwitch, president and chief executive officer of Delivering Good. Since 1985, more than $1.8 billion of donated products have been distributed through their network of community partners.

Allan Ellinger, board chairman of Delivering Good and senior managing partner, MMG Advisors Inc., used his time at the platform to reveal his successor at the charity. “It’s a very poignant evening as this is my last gala as chairman of Delivering Good,” said Ellinger, who will be succeeded Jan. 1 by Andrea Weiss. “The past 13 years have been an amazing journey for me,”  he said.

During the dinner, O’Neal played a key role in the auction, going so far as to auction himself off to a parent of a lucky boy or girl for their bar or bat mitzvah, calling it a “Shaq Mitzvah,” or even to make an appearance at a wedding. It drummed up thousands of dollars for the charity.