Chanel’s Fight With The RealReal Heats Up

The luxury designer is fighting the reseller's effort to get a New York federal court to throw out their closely watched dispute.

Chanel won’t back down. The luxury brand, which fired its shot across the bow of sophisticated resellers of designer goods last year by accusing The RealReal and What Goes Around Comes Around of selling counterfeits, is keeping the fight alive.

In its New York federal suit against The RealReal Inc., Chanel Inc. disputed the reseller’s assurances that it carries only authentic labels verified by a crack team of gemologists and other experts. Chanel had claimed that “only Chanel itself can know what is genuine Chanel,” while The RealReal panned the suit as little more than an effort to stamp out competitors in the secondary market.

In March, the reseller asked the court to throw out the suit, but Chanel fired back again earlier this week, seizing on the seeming contradiction of The RealReal advertising to consumers that each of its products “is 100% the real thing,” while arguing in court documents that its expert’s assessments were more of “a general expression of opinion.”

“Simply put, [The RealReal] cannot hold itself out as an expert authenticator and seller of “100 percent real” Chanel-branded products and then, after advertising and selling counterfeit Chanel-branded goods, claim that its advertising claims are merely ‘general expression[s] of opinion’ that are ‘immune from challenge,’” Chanel’s lawyers argued in the brand’s filing Wednesday.

Chanel had claimed that it discovered at least seven counterfeit bags sold by The RealReal, and argued that it shows that the reseller’s experts aren’t to be trusted. A spokeswoman for The RealReal said the company “unequivocally rejects” the allegations.

“Chanel’s lawsuit is nothing more than an alarmingly thuggish effort to stop consumers from reselling their authentic used goods, and to prevent customers from buying those goods at discounted prices,” The RealReal spokeswoman Christine Heerwagen said in a statement Thursday. “The RealReal stands behind its authenticity guarantee and will continue to provide a safe and reliable platform for consumers to resell luxury items.”

Designer brands have long taken a dim view of consignment and secondhand sales, but Chanel’s suits mark a new chapter because it targets the lure at the heart of a burgeoning luxury resale market — the promise of real labels at relatively more affordable price tags.

“Customers of The RealReal would be Chanel customers, they’re not someone who’s looking for counterfeit,” said Maria Savio, principal at Gottlieb Rackman & Reisman PC. “Obviously, Chanel sees that as a loss to their business.” 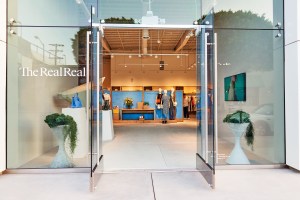 As Chanel’s legal battle with The RealReal heats up, the stakes are high. Not just for traditional luxury brands capitalizing on their legacy prestige, but also for luxury resellers trying to expand their place in an increasingly diverse and sustainability-conscious market for designer goods. The overall apparel resale market is expected to grow to $41 billion by 2022, according to a report in 2018 by the online reseller ThredUp.

In the meantime, intellectual property law imposes some obstacles for luxury brands trying to weather this competition. The fair use doctrine, for instance, would generally allow resellers to sell bona fide Chanel products and accurately market those products as Chanel products, so long as they don’t also use Chanel logos or other protected trademarks to do so and imply some kind of association. Meanwhile, the first sale doctrine generally means brands can’t stop their customers from reselling their products for secondhand use.

So Chanel has clung to the question of authenticity, insisting that only its own team has the final word. And the fashion industry is paying attention to see how that argument fares, say trademark attorneys.

“They’re really watching to see to what extent a luxury brand owner can work its way around ‘Fair Use’ and ‘First Sale’ to dictate how their products are subsequently sold,” said Christopher Kelly, who chairs Wiley Rein LLP’s trademark practice group.

If Chanel beats The RealReal’s motion to dismiss, the case will then likely proceed to discovery, the phase where each side asks the other for more evidence. At that point, Chanel would likely ask for more documentation on how The RealReal verifies the authenticity of its products, while The RealReal might seek more proof about purported counterfeits, attorneys said.

A decade ago, Tiffany & Co. battled eBay Inc. in federal court under somewhat similar circumstances. In that case, the luxury jewelry retailer argued that counterfeit versions of its jewelry were being sold on the e-commerce company’s web site. Though it lost on trademark infringement claims, Tiffany persuaded the Second Circuit federal appeals court in 2010 that eBay could potentially be held accountable for allowing the jewelry to be promoted on its web site as Tiffany merchandise.

In that case, eBay was able to shake off a number of the claims because it was not a direct reseller, and simply the platform where the products were sold. The RealReal and What Goes Around Comes Around, being the actual resellers, could face different repercussions for potential counterfeits, attorneys say.

“The Chanel cases are different, because the reseller is basically guaranteeing the authenticity of products,” Kelly said. “That goes beyond simply putting them up for sale.”