Their lawyers, headed by Massimo Dinoia, are appealing a guilty verdict handed down by a Milan appeals court in April. 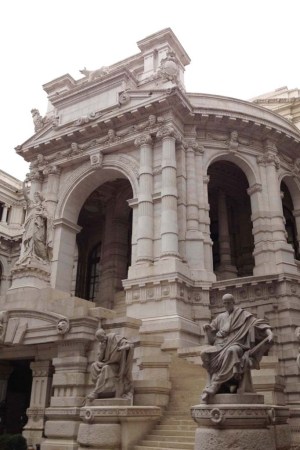 Retail’s ‘Chapter 22’ Risks During the Pandemic

ROME — The Dolce and Gabbana tax case has moved on to the highest level.

This story first appeared in the October 22, 2014 issue of WWD. Subscribe Today.

The first hearing at the Corte suprema di Cassazione, Italy’s equivalent of the Supreme Court, took place in Rome on Tuesday morning. The imposing building overlooking the Tiber River, referred to as the “Palazzaccio” by the Romans for its grand dimensions and elaborate decorations — including a chariot pulling four horses on the roof at the entrance — is intimidating in itself. The hearing was held in an expansive, high-vaulted, stuccoed marble room and was presided over by five judges, headed by president Alfredo Teresi, seated at a long wooden desk structure almost entirely covered in files brimming with papers.

Lawyer Riccardo Olivo was present in place of the eight lawyers for the defendants: Stefano Gabbana, Alfonso and Domenico Dolce, Cristiana Ruella, Giuseppe Minoni and Luciano Patelli. None of the defendants were in attendance. Their lawyers, headed by Massimo Dinoia, are appealing a guilty verdict handed down by a Milan appeals court in April. That court, headed by Judge Laura Cariati, dismissed the possibility of ignorance in the matter, which the designers claimed in their defense, and, instead, saw “an intentional” plan to avoid a higher tax rate in Italy, compared with rates in Luxembourg, where they had based ownership of their company.

The hearing at the Cassazione, Italy’s highest court, was to determine if there were any procedural flaws or breaches at a lower court level that might result in a reverse of the appeals court’s decision.

General prosecutor Francesco Salzano is expected to speak on Friday, when the judges are slated to issue their verdict. “The particular complexity of the procedure and the high number of defendants does not allow a treatment [of the case] during the hearing today,” said Teresi on Tuesday.

Judge Aldo Aceto, one of the four judge counselors, summarized the past three years of trials at the lower court levels, pointing to being “submerged” by detailed paperwork on the case — to a round of stifled sniggering.

Among some of the flaws that the defendants’ lawyers brought forward, Aceto cited how the court at the first level “for no reason refuted a number of witnesses that were deemed relevant to discuss the actual existence of the [Gado] structure in Luxembourg.” Another issue at the heart of the trial was what the defendants’ lawyers called the “fictitious criteria” used to determine where the management of the company was located and where the decisions were taken. The lawyers also lamented that the “sentence was issued in a few lines and carried out to everyone ipso facto.”

Following investigations that began in 2008, initiated by the Guardia di Finanza, an Italian police force under the authority of the national minister of economy and finance, Dolce and Gabbana were charged with tax evasion related to the 2004 sale of the Dolce & Gabbana and D&G brands to the designers’ Luxembourg-based holding company, Gado Srl. The Italian tax police reportedly consider Gado essentially a legal entity used to avoid Italy’s higher corporate taxes.

The lower court judges expressed their belief that Gado was only fictitiously based in Luxembourg and that the administration and main location of the company’s activities were in Italy. The appeals court upheld the decision of the lower court, ruling the defendants guilty, albeit with a two-month reduction in their jail sentences.

Dolce, Gabbana and accountant Luciano Patelli were sentenced by the appeals court to one year and six months of jail time. Dolce’s brother Alfonso, Dolce & Gabbana general director Cristiana Ruella and finance director Giuseppe Minoni were sentenced to one year and two months in jail plus legal expenses. None are likely to serve jail time, given the Italian practice of waiving incarceration for sentences of less than two years.

The defendants, who have always denied all charges, were acquitted in June last year on the second count with which they were originally charged, regarding the valuation of the company and the tax rate paid.

The defendants were originally absolved of the claims by a lower court in April 2011, but the Cassazione in November 2012 overturned that decision, saying that tax avoidance, or tax mitigation, on an earnings declaration is a criminal offense under the law. A new trial at the first court level began in December 2012 and wrapped up at the end of June 2013, with the defendants found guilty. The appeals court then upheld that decision.