From Streetwalk to Catwalk

Some might call it eveningwear, but in this case, it's really apparel for ladies of the evening. Or women who just want to look like them. 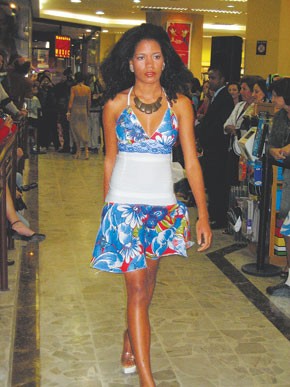 RIO DE JANEIRO — Some might call it eveningwear, but in this case, it’s really apparel for ladies of the evening. Or women who just want to look like them.

A prostitute-rights advocacy group here is promoting a clothing line with proceeds aimed at helping women in the world’s oldest profession with health and safety issues and battling discrimination against them.

Daspu, the casual label of Davida, the nongovernmental organization advocacy group, was launched to raise money for AIDS-prevention courses and free condoms distributed in red-light districts, and to print a monthly newspaper. It features stories about laws affecting prostitutes, free health benefits for them and editorials denouncing prostitution involving minors (those under 18), which is rampant and illegal. Prostitution is legal for women 18 or older.

If the word Daspu sounds vaguely familiar, it may be because of its similarity to the Brazilian luxury fashion emporium Daslu. In fact, Daspu got unintentional marketing help from the retailer, which threatened to sue the brand even before it was launched.

In November 2005, Daslu sent the NGO a letter saying that its brand’s tongue-in-cheek reference to the emporium — “Pu” is short for puta, or prostitute — denigrated its name and image and told Davida to change the name or face a lawsuit, according to Daslu owner Eliano Tranchesi.

Ultimately, Tranchesi said, “Daslu decided not to sue Davida because we had more pressing priorities, even though I think it was using our name to promote its brand.”

Gabriela Leite, a 56-year-old retired hooker who heads Davida, responded, “We decided not to change the name because Daspu means ‘of the prostitutes’ and it fit like a glove. Daslu’s threat created bad publicity for Daslu and good publicity for Daspu.”

In December 2005, Daspu began selling slogan T-shirts. One of the big sellers: “Somos m??s, podemos ser piores,” or “We’re bad, but we could be worse.”

“Davida launched Daspu not just to fund the NGO’s social outreach, but also to send the message, ‘It’s OK to be a hooker,’ and to fight discrimination against prostitutes,” said Leite.

Daspu opened its store here in March 2006 and began launching its new collections during fashion weeks in Rio and São Paulo, but at alternative venues — public squares, music houses and bars — not surprisingly, drawing big crowds. Prostitutes were among those who modeled the apparel.

In June 2006, Daspu’s collection was inspired by the world of truck drivers. It featured T-shirts, jumpsuits and dresses, some with prints of tire tracks and silhouettes of female hitchhikers. The theme of Daspu’s next collection was famous art inspired by prostitutes. Tops featured prints of Picasso’s “Les Desmoiselles d’Avignon” or Marlene Dietrich in “The Blue Angel.”

Daspu’s latest collection, launched in July and inspired by the Copacabana beach district, includes pieces like a black-and-white sequined dress with wave patterns resembling Copacabana’s seafront sidewalk; a flower-print chintz summer dress with a white gauze midsection; a bra made of a patchwork of viscose circles, pinched into flowers and worn with slit-leg pants, and a sky blue summer dress with patchwork midsection. The pieces retail from $50 to $150.

“We put our label on the outside of 80 percent of our apparel because women who wear the brand identify with it,” said de Oliveira. “Fashion is attitude.”

Daspu sells to 10 multibrand stores, five of them in São Paulo, Brazil’s fashion capital. In October, it began exporting and sent 450 pieces to Jamarico, a four-boutique chain in Zurich.