Giorgio Armani on Dubai, Post-pandemic Realities and Being a Voice in the Desert

Gigi Hadid has become the model for copyright infringement complaints.

A new lawsuit alleges the fashion icon posted a photo to her personal Instagram account without permission. But this isn’t the first time Hadid has landed in this mess. Hadid has been sued for copyright infringement before.

The latest case, which was submitted in a federal court on Monday, was filed by the independent business Xclusive.

According to the suit, in October 2018 Hadid “copied and posted [the] copyrighted photograph to Hadid’s Instagram account without license or permission from Xclusive.”

With more than 45 million Instagram followers, roughly 1.6 million people commented on or liked the photo just days after Hadid posted it, according to court documents. Now the New York City-based business is seeking damages for copyright infringement, as well as any profits derived from the image.

And, not only is Xclusive claiming to own the rights to the photo, it’s claiming Hadid knew what she was doing was wrong. The supermodel was named as a defendant in a similar copyright suit: In 2017 photographer Peter Cepeda snapped a photo of Hadid. A photo she later posted to her Instagram, apparently without asking him. Cepeda filed a lawsuit against Hadid the following September.

Even though the case was settled outside of court, “the facts alleged in Cepeda’s [case] are nearly identical to the facts alleged in the present case, including the allegation Hadid copied and posted [the] plaintiff Cepeda’s copyrighted photograph (of Hadid on a public street in New York City) to Hadid’s Instagram and Twitter accounts without license or permission from Cepeda,” the court documents read.

Judging by her Instagram page, it seems Hadid was at least aware that some people would take issue with the photo. She quickly deleted the Xclusive photo. Then, on Oct. 18, 2018, a week after the Xclusive photo was taken, Hadid posted her thoughts on the matter.

“Yesterday I heard from my management that I am being ‘legally pursued’ for my last (now deleted) Instagram post,” Hadid’s Instagram post says. “I posed/smiled for the photo because I understand this is part of my job…but these people [paparazzi] make money off us every day. LEGALLY stalking us day in and day out — for nothing special.”

Hadid goes on to say that she finds the idea of someone suing her over a photo she found on Twitter “absurd.”

“I had no way of knowing which of the 15+ photographers outside that day took these exact photos; if the person had just commented on my photo I would have been happy to tag and give credit,” the post says. 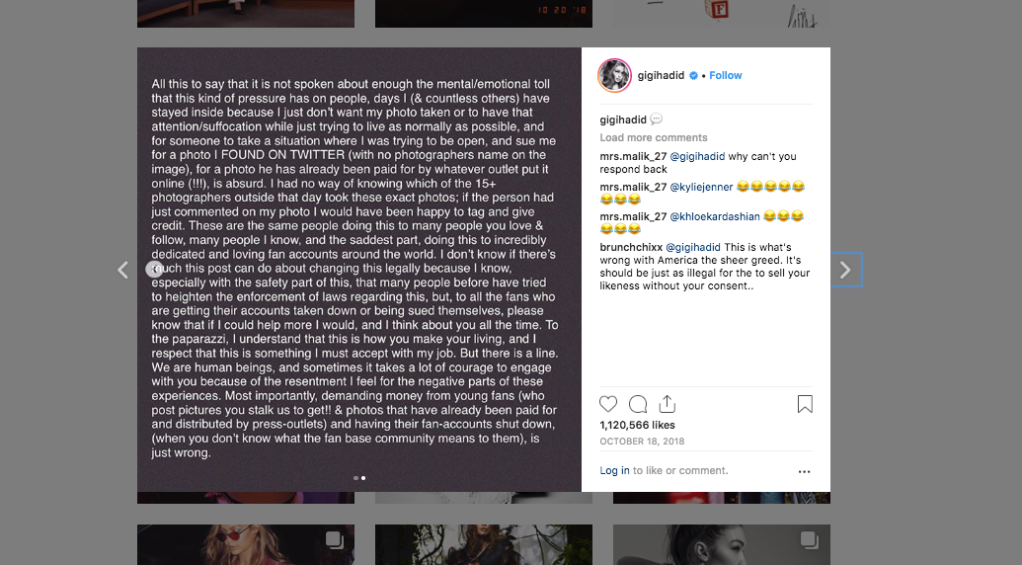 Hadid has more than 2,800 Instagram posts, many of her at work as a model, celebrity and at other press events. The page routinely gets more than a million likes for a single photo.

In the suit, Xclusive points out that Hadid’s Instagram is filled with “examples of uncredited photographs of Hadid.”

“Most if not all of these photographs were posted by Hadid without license or permission from the copyright holder,” the suit states.

While reposting images to social media platforms may seem commonplace in the digital world, Susan Scafidi, fashion attorney and founder of the Fashion Law Institute at Fordham University in New York City, said Internet photos are still subject to copyright protection and reusing photos without permission could, in fact, violate the photographer’s rights.

“This is true even when the individual reposting a photo also appears in it,” she said.

“Everyday reposting of photos rarely results in lawsuits, since the value of most images is minimal and most reuse does not generate profits,” Scafidi pointed out. “Models and influencers, however, may derive substantial income from posting images — and some photographers whose copyrighted images are used without permission are prepared to demand a cut.”