A N.Y. federal judge ruled earlier this week that the sneaker platform Goat Group has to stop selling apparel, and apparel accessories, under the Goat label.

By Samantha Conti
with contributions from Obi Anyanwu
on September 30, 2020

Goat apparel and the app.

LONDON — London label Goat Fashion Ltd., known for its array of snappy dresses, coats and trousers and a sleek boutique on Conduit Street here, has won an injunction against the sneaker retailer Goat Group in the U.S. to stop the latter from selling clothing.

According to court documents, a federal judge in Manhattan has preliminarily enjoined Goat Group, the sneaker and streetwear platform, from selling apparel and apparel accessories using the Goat trademark.

The court’s decision comes on the heels of Goat Group’s success in raising a $100 million investment from D1 Capital Partners to expand into the apparel market. D1’s investment valued Goat Group at $1.75 billion.

According to court documents, in December 2019, the London-based designer brand Goat Fashion Ltd. began a trademark infringement and breach of contract lawsuit against 1661 Inc., which does business as Goat Group.

In the lawsuit, Goat Fashion claimed it owns the trademark rights to Goat in the U.S. for clothing specifically. The fashion label sells through its own store, its e-commerce site and an array of retailers including Matchesfashion, Farfetch and Harrods. 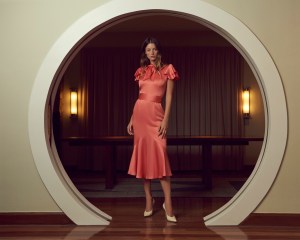 A look from Goat for fall.  Courtesy Photo

According to court papers, 1661 entered into a consent agreement with Goat Fashion in 2017 after the U.S. Trademark Office refused to register 1661’s Goat mark in connection with its online marketplace.

The U.S Trademark Office’s refusal specifically cited Goat Fashion’s prior Goat registrations, finding “a likelihood of consumer confusion.” In that consent agreement, 1661 agreed to sell sneakers and not clothing or clothing accessories in order to obtain a Goat trademark registration for its online marketplace for sneakers.

Regardless of that, three months later, in October 2019, 1661 began selling apparel through its smartphone mobile app, prompting Goat Fashion to file its lawsuit last December. According to the court papers, the parties discussed a potential settlement, but after 1661 started to expand its reach and sell apparel on its web site last February, Goat Fashion filed an emergency motion for a preliminary injunction. 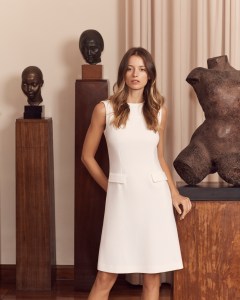 Earlier this week, federal court Judge Paul A. Engelmayer issued a decision and order granting Goat Fashion’s preliminary injunction motion. The result is that 1661 has been preliminarily enjoined from selling apparel and apparel accessories using the Goat mark.

Goat Group is still selling clothing, and its app on the Apple Store shows the brand as offering “Sneakers & Apparel, Past, Present, Future.”

On Wednesday, 48 hours after the court’s initial decision, the judge was forced to issue a new order to Goat Group for “urgent and complete compliance” with the preliminary injunction. The judge is also allowing Goat Fashion to file a motion against the sneaker platform for contempt against the initial ruling.

Earlier this week, Engelmayer ruled that Goat Fashion had met its burden in demonstrating “irreparable harm” following the breach of contract and trademark infringement claims.

The judge also found that any harm to 1661 from “its inability to perform on any contracts that relate to its apparel offerings using the Goat mark” was “a problem of its own making, as it had bound itself in the consent agreement not to do so.”

He added that 1661 “acted with full knowledge of the potential implications of this action — it assumed the risk of entry of the preliminary injunction” that Goat Fashion sought.

“We are very pleased with the outcome and the court’s detailed decision on our claims in this David-versus-Goliath fight,” said Thomas Telesca, who represented Goat Fashion in the case. Telesca works with the Uniondale, N.Y., law firm Ruskin Moscou Faltischek.

Jane Lewis, the founder and owner of Goat Fashion, declined to comment.

Goat Group said: “The court’s ruling from Sept. 28 is preliminary, and does not reflect a final adjudication of the case. While we are in the process of complying with the order and we typically do not comment on ongoing litigation. We will continue to aggressively defend against the allegations made in this case until this matter is resolved.
“Importantly, the court’s ruling does not relate to Goat’s sneaker business and is focused solely on apparel and apparel accessories. Goat exists to inspire individuals to be their greatest, and we will continue to deliver on our brand promise with our community, business partners and brands who rely on our platform to reach our more than 30 million members.”
matchesfashion.com
load comments
blog comments powered by Disqus