Fashion’s Nostalgia and the Infringement Trap

Just when does homage become infringement? The answer has resonance for Tom Ford, Marc Jacobs and other designers mining the past.

Steve McQueen in a collared cardigan and Tuesday Weld in the 1965 drama "The Cincinnati Kid."

Designers mining the past for inspiration need to be careful about just how they pay tribute — homage and infringement can be too close for comfort.

Just ask Tom Ford and Marc Jacobs, whose brands have been sued for making references to a protected past.

In a suit in March, the son of Sixties Hollywood star Steve McQueen argued that the design and marketing tied to Tom Ford’s shawl-collar wool cardigans infringe on Steve McQueen trademarks.

The suit neatly posed a common question in fashion legal circles, just how close is too close?

The answer might be subjective, but trademark attorneys said the trouble starts when designs don’t simply allude to a resurrected trend, but explicitly evoke specific icons and imagery that may be protected.

“No one can own the idea of a nail ring or a peasant dress, but the question is, ‘How is it executed?’” said Andrea Calvaruso, who chairs Kelley Drye & Warren LLP’s trademark and copyright practice group. “Where you draw the line between homage and copying is in the execution.”

In the suit against Tom Ford, Chadwick McQueen described his father, who starred in “The Cincinnati Kid” and “The Sand Pebbles,” as an enduring style icon whose characters’ signature looks included the shawl-collar cardigan. One snag for Tom Ford might be that the cardigans it is selling also appear to bear the McQueen name on their label, attorneys said. One look billed McQueen Cardigan on the Tom Ford web site sells for $2,390.

Sometimes, it’s the use of a famous name, rather than just a well-known design, that might create problems.

“For a designer to say, ‘I’m going to bring back a popular style that was popularized by someone’ is one thing,” said Josh Gerben, founder of intellectual property firm Gerben Law Firm. “But if you call it a McQueen Cardigan, you’re taking somebody’s name. The question is, does somebody else own the right to be able to do that?”

That doesn’t mean such cases are a slam dunk. Companies asserting their trademarks over a competitor’s product also have to show that consumers are likely to associate that product with their own. To do that, they will often conduct trademark surveys to gauge how the purchasing public perceives the product, and see if it confuses customers or misleadingly suggests some kind of brand collaboration.

“Trademark law is very protective of consumers,” said Lynn Rzonca, who leads Ballard Spahr LLP’s intellectual property department. “Courts, when they are assessing these claims, look at a number of factors — ‘What is the mark? How sophisticated are the consumers? Was there an intent to trade off the goodwill of the prior user’s mark?’”

But another wrinkle for Tom Ford is that McQueen’s suit also makes claims for right of publicity, which is protected by state law in California, and generally prevents companies from using someone else’s name for commercial purposes without permission. To prevail on a right of publicity claim, you don’t necessarily have to show any customers were confused about the product.

“California has a robust level of protection for right of publicity, and part of that has to do with the entertainment industry being a big part of the state,” said David Ervin, a partner in Crowell & Moring LLP’s intellectual property group.

A spokeswoman for Tom Ford declined to comment further on the suit.

The McQueen suit echoed an ongoing federal suit in California, in which Nirvana sued Marc Jacobs International over the brand’s Bootleg Redux Grunge collection. But the Nirvana suit bears a key difference, because it includes a copyright claim, which changes what the suit has to prove. Courts usually test copyright claims by asking if there is a registered copyright at issue, and, if so, whether the disputed design is identical or substantially similar to the copyrighted work.

The Marc Jacobs collection features sweatshirts, T-shirts and event promotion graphics that use a modified version of an iconic logo designed by Kurt Cobain, for which Nirvana argues it owns a copyright. The original logo is simple, merely a cartoon face with a wobbly smile and two Xs for eyes. The designer’s take on the cartoon substitutes the Xs with the initials M and J. Marc Jacobs sought in March to dismiss the suit, arguing that the complaint doesn’t actually show that Kurt Cobain handed over his rights to the smiley face drawing to Nirvana Inc., which owns the copyright at issue. The court is yet to decide.

“You can argue about whether something as simple as a smiley face can be copyrighted,” said Staci Riordan, chair of Nixon Peabody LLP’s fashion law practice. “But once something is registered, it is presumed valid.” 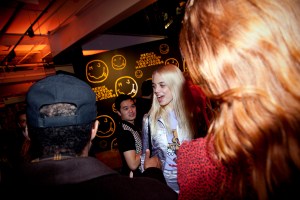 A question that designers, or at least their attorneys, might consider is, are they paying homage through design features that are generic enough? When the question is one of trademark law, which might involve a more nuanced legal analysis than a copyright claim, the Louboutin ruling by the Second Circuit appeals court is still a beacon. In that case, where designer shoe brand Christian Louboutin targeted Yves Saint Laurent America Holding Inc. over a red shoe, the Second Circuit issued the key ruling that, yes, a color can be a trademark in the fashion industry, depending on how you use it. The red outsoles on its pumps are a “distinctive symbol that identifies the Louboutin brand,” the appeals court panel wrote.

“It’s one thing to pay homage to a decade or a trend, but how you execute the item, that’s where the intellectual property rights would apply,” Calvaruso said of Kelley Drye.