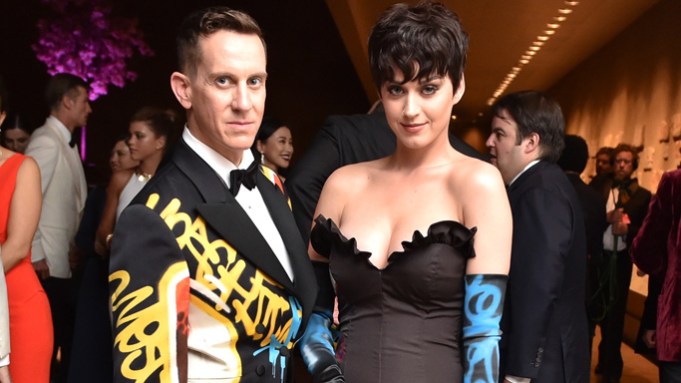 In response to the ongoing legal dispute with the graffiti artist “Rime,” Jeremy Scott has filed a declaration claiming that a graphic artist at Moschino “selected and created” the print in question.

This summer, Joseph Tierney, the street artist known as “Rime,” filed a seven-claim copyright suit in the U.S. District Court in the Central District of California alleging copyright infringement, among other things. Rime claims Scott appropriated elements of the “Vandal Eyes” mural he did on the side of a Detroit building in 2012 into his fall collection for Moschino. Katy Perry wore one of the dresses bearing the print to the Costume Institute Gala at the Metropolitan Museum of Art last May.

Moschino SpA is also named in the suit, but Perry is not. Last month the designer was served legal papers at the premiere of his documentary “The People’s Designer” in Los Angeles. A preliminary hearing is set for December 7 in California federal court.

In his declaration to strike the complaint, Scott, who serves as Moschino’s creative director, said he “had the idea of doing a graffiti-based collection, ” but did not design the print. The person who did allegedly design the print is not identified in the filing in any way.

In what appears to be an exercise of self-expression and self-promotion, Scott used his filing to detail his design ethos and fend off critics who have dismissed his work as too mass. In fact, his explanation focuses almost entirely on his approach to work, as opposed to the actual legal dispute.

The designer also gives shout-outs to celebrity clients like Rihanna, Miley Cyrus, Madonna, Paris Hilton, Katy Perry, Jared Leto and Lady Gaga. Referring to the accolades he has received for his work, Scott noted that all of the above had worn his designs in the past year. He also made mention of being the subject of a new documentary (“The People’s Designer”), his Rizzoli-published book “Jeremy Scott” and how he designed the costumes for Katy Perry’s “celebrated” Super Bowl XLIX halftime show, “which was one of the most-watched television events in history.”

Scott wrote, “As an artist, my expressive work may not always be ‘on trend’ or follow the zeitgeist of a particular fashion season, as dictated by the likes of Vogue or Harper’s Bazaar. Instead, my work speaks to a larger message and it is just as likely to cause viewers to question our values and our relationship with societal institutions as it is to elicit compliments about the work itself.”

Tierney’s suit is seeking damages for copyright infringement; falsification; removal and alteration of copyright management information; unfair competition under the Lanham Act, the California Business and Professions Code and California Common Law; appropriation of name and likeness in violation of the California Civil Code, and negligence.

Scott also allowed that while on the surface, much of his work features “a humorous take on an issue related to fashion or popular culture, below the surface, the work prods viewers and wearers to ask questions about bigger social issues.”

To that end, Scott cited in the legal filing how his take on military headgear — helmets with large disc ears evocative of Mickey Mouse that Rihanna wore in her music video “Hard” — “communicate the inherently puerile nature of war.”

He also noted how his rendition of an evening gown for the opera-attending beau monde features a print replete with nutritional content information and graphics as if the gown were a giant bag of junk food. “This tongue-in-cheek riff on Brahmin formalwear highlights the disposable nature of fashion and speaks to the potentially dichotomous nature of inner and outer beauty and the waist/waste and excess of consumer culture,” he said in the filing.

Rime’s lawsuit alleges that the idea of putting graffiti or street art on ultra-expensive clothing “was meant to provoke and generate publicity for the brand/designer.” The suit alleges that the brand “paid Perry to advertise and display the clothing at the gala, a high-profile party thrown annually by one of the nation’s most venerable institutions, the Metropolitan Museum of Art in New York City. Not only did Perry and Scott advertise, wear and display the clothing at the event, they arrived at the event in a spray-painted Rolls Royce, and even carried around Moschino-branded cans of fake spray paint during the event, as if defendants were responsible for the artwork.”

Regarding the works in question developed under his Moschino responsibilities, Scott said, “I came up with a concept for a dress to be worn at the celebrated Met Gala and a graffiti-based collection that subverted the seriousness of traditional black-tie fashion while also commenting on the way in which society objectifies women by literally imposing cultural symbols and meaning upon them. I used the medium of graffiti, and the way in which street artists impose cultural symbols and meaning upon the vernacular landscape, to create a metaphor of a sophisticated woman literally tagged with graffiti, much like any light pole, brick wall or mail box on the street corner.”

He also said that he “had the idea of doing a graffiti-based collection,” but did not design the actual print on the dress.

In closing, Scott let the California court know “I feel blessed to be able to do something I love for a living. Fashion has a unique ability to communicate who we are at any given time in history and what we are feeling as a society. As an inherently creative individual, the ability to design and create fashion with an expressive message that I can share with the world lies at the core of my being.”

Throughout the declaration to strike the complaint, Scott offered a primer about fashion and its influence and link to pop culture. “For me, fashion is not simply a job or a way for people to clothe themselves; rather, it is my way of expressing myself creatively. While fashion elites have historically dictated what people — especially women — should wear and how they should wear it, my work takes a fundamentally different approach towards clothing,” he wrote. “Rather than just proposing new skirt lengths and dress hems for each season like a traditional fashion designer, I use fashion as a vehicle to communicate and connect with the world.”

Noting that his work frequently uses a sense of humor to help make audiences more receptive to his message, Scott wrote, “With its unadulterated revelry in pleasure and happiness and its transgressive nature, my work subverts the seriousness of traditional fashion and facilitates communication, which is more effectively achieved with a sense of fun rather than through preaching at people or talking down to them. The humor of my work puts a smile on the faces of my audience, providing them with a respite from their problems and the woes of the world, and opens them up to the possibilities of imagination and a re-examination of our society and its values.”