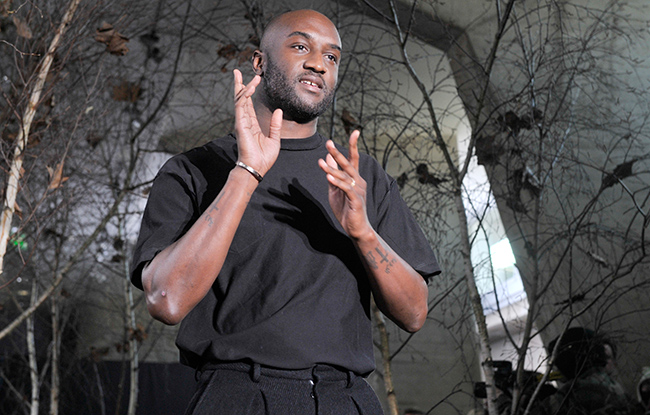 High-end streetwear line Off-White isn’t taking kindly to a demand that it stop using its now signature diagonal stripe design, which denim brand Paige is claiming as its own.

The brand designed by longtime Kanye West insider and collaborator Virgil Abloh on Friday asked a New York federal court for a declaration that the graphic diagonal stripe design used on interior labels and garment tags, as well as a design element on a variety of items, is not infringing on a diagonal stripe design trademarked by Paige.

Off-White was prompted to file the action after Paige sent a cease-and-desist letter to the brand’s attorneys, alleging its striped design is “so similar” to four trademarks owned by Paige that there was risk of “customer confusion” over the origin of and relationship between the brands.

While the stripes of both brands slant from right to left, there are some clear differences, namely the more organic nature of the Paige marks, which appear in one trademark as a tight squiggle line meant to depict stitches, and in another appear closer to a brushstroke. The Off-White stripe is a more graphic depiction with straight lines.

Paige is also asking that Off-White withdraw a pending trademark application for its stripe logo that, if granted, would protect its use on a full range of leather goods and apparel. Paige has also filed a petition to have the pending application canceled.

Off-White told the court that its stripe marks “do not infringe on any alleged trademark rights held by [Paige],” according to its court filing.

“There is no likelihood of consumer confusion as to source, affiliation, sponsorship, or connection with the defendant that is caused by Off-White’s use of the Off-White diagonal marks,” Off-White said.

The brand added that the two sets of marks “have coexisted since at least as early as 2013 (i.e., for the past four years), and there is no evidence of actual confusion.”

Moreover, Off-White pointed out that the Paige trademark at issue is only used as stitching on the back pockets and certain seams of denim garments, while Off-White’s mark is not used as stitching, and said the Paige marks do not appear as a logo anywhere on its web site.

Although Off-White attempted to negotiate with Paige out of court, the brand said a deal was impossible, given the denim company’s “overreaching requirements as to future restrictions” of Off-White’s striped mark.

With that, Off-White asked the court to declare that the brand has the right to advertise and sell products incorporating its striped mark and permanently enjoin Paige from “interfering with, or threatening to interfere with” the Off-White brand.

Counsel for Paige Rod Berman said he and his client were “surprised” with Off-White’s action “given that the parties had been engaged in settlement discussions.”

“We expect the matter will be resolved but if it is not, Paige will vigorously defend the lawsuit,” he added.