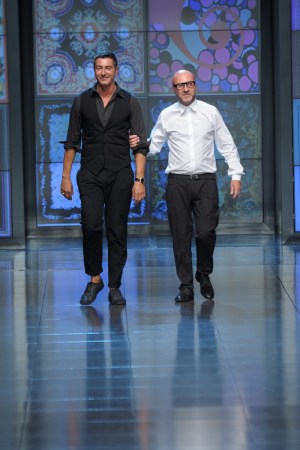 Anticipating the Next Wave Of Retail Bankruptcies

MILAN — In his closing speech at the tax trial of Domenico Dolce, Stefano Gabbana and board member and general director Cristiana Ruella, the prosecutor on Wednesday requested that the three be sentenced to two-and-a-half years in prison for tax evasion.

Prosecutor Gaetano Ruta alleged in his statement that the only purpose in selling the Dolce & Gabbana brands to the Luxembourg-based Gado Srl was to avoid paying taxes.

Lawyers for the defendants, who have repeatedly denied all the charges, will make their closing arguments in the case on June 12.

Ruta had the harshest words for accountant Luciano Patelli, who he viewed as the “orchestrator” of the issues at trial, asking Judge Antonella Brambilla to sentence Patelli to three years in prison. “We’ve been dealing for years with professionals in Milan and abroad that tempt entrepreneurs with promises of fiscal advantages. Cases such as this one would not exist if the Patellis of this world did not exist,” said Ruta.

He lamented a “lack of transparency that contrasts entirely” with the obligations of one of the “oldest and most noble professions” — accounting — one that he defined as “a filter between the State and each citizen.”

The prosecutor requested Alfonso Dolce, Domenico’s brother, and finance director Giuseppe Minoni be sentenced to two years in prison, while defendant Antoine Noella be absolved for lack of evidence.

The long-running case is related to the 2004 sale of the Dolce & Gabbana and D&G brands to the designers’ Luxembourg-based holding company, Gado. The Italian tax police reportedly consider Gado essentially a legal entity used to avoid higher corporate taxes in Italy.

The defendants, said Ruta, all contributed to structuring and “actively participating” in the operation. Ruta marveled at “the common front” put up by the defendants and Patelli without traces of a fallout. He noted how witnesses all pointed to the remoteness of the designers, generally described throughout the trial, which kicked off in December, as “the creative minds” distanced from decisions related to the restructuring of their company.

“Well, they are the ones who indirectly benefited the most from all of this,” Ruta remarked.

Each designer had a 50 percent stake in Dolce & Gabbana Srl, which controlled an 80 percent stake of Gado. “Thanks to the strongly beneficial tax rate, the profits were eventually channeled to them,” said Ruta.

The prosecutor described Ruella as “the loyal motor behind the restructuring of the group,” and spent most of his three-and-a-half-hour speech retracing the significant steps of the hearings to prove that Gado was an “entity devoid of content. And the brands could easily have been sold to other existing companies of the group,” he said.

“Can we actually say that Gado had activities in Luxembourg? The strategy of the defendants’ lawyers hinged on the idea that the uncomplicated structure that had been set in place to protect the brands in Luxembourg was enough,” said Ruta.

On the contrary, he said, Gado had a lack of an “autonomous organizational structure.” He questioned how employee Maria Grazia Bergomi had been transferred to Luxembourg one year after Gado was founded. “How could one employee be enough to safeguard the brands’ trademarks around the world?”

He referred to witness Vittorio Faraggiana, a Milan-based consultant on intellectual property, saying that that testimony proved that intellectual property activities related to Dolce & Gabbana were actually in the hands of outside consultants such as the Guzzi and Ravizza studio, which did “all the outsourcing. Custom authorities contacted the studio directly. And whenever substantial issues with Gado emerged, they were dealt with by individuals that did not live in Luxembourg, who did not work there and only occasionally went there,” said Ruta, pointing to board meetings that would be held “only once or twice a year. Gado was a structure functional to the realization of a fiscal advantage that was concretely obtained.”

Ruta referred to a ruling whereby Gado had a 4 percent tax rate, much lower than Italy’s of more than 30 percent.

The prosecutor also expressed doubts about the initial public offering that witnesses referred to as one of the main reasons for the designers’ decision to sell the Dolce & Gabbana brands to Gado.

“The sale was touted as a way to list in a market with an international standing, but the IPO never took place and Ruella said she was aiming for an international profile. But in 2004 you can say anything, but not that the company was not international,” said Ruta.

He added that the defendants’ lawyers have deposited reports dating back to the Nineties and until 2010 by banks and financial investors, from Morgan Stanley to Merrill Lynch and Deutsche Bank. “I would lie if I said that I read every single page, but I examined all the documents and there is not a single trace or reference to an IPO in Luxembourg. There are talks of expansion and benefits through an IPO , but there is no specific IPO project, except perhaps a mention of Hong Kong. After years of experience, I see these as approaches made by the banks and not by Dolce & Gabbana,” said Ruta.

Also, he claimed that contrary to what Ruella believed, he had seen no evidence of Dolce & Gabbana paying a 30 percent tax on royalties in Italy.

The plaintiff solicitor Gabriella Valadia, who spoke after Ruta, asked for a provisional fine of 10 million euros, or $13 million, citing damages to the image of the Revenue Service. “Tax evasion shows a system is not credible and efficacious, it hurts the credibility of the Italian fiscal system, aggravated by the fact that the individuals at the center of the trial are so famous,” said Valadia.

If found guilty of the charges, the defendants are expected to appeal.