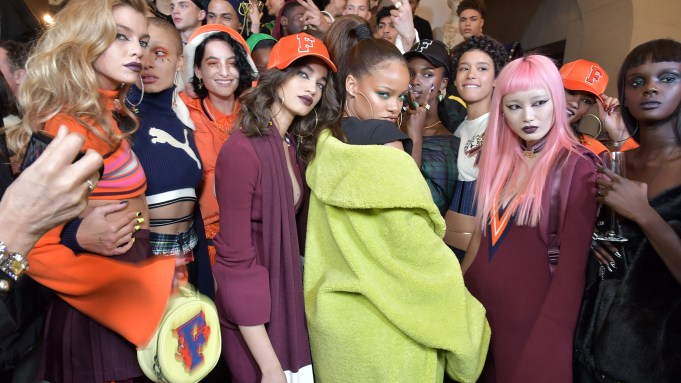 Puma is casting Forever 21’s alleged copying of Rihanna’s collaborative shoe designs as more than an affront to its intellectual property, but a threat to its entire business.

In an effort to get Forever 21’s suede creeper sneaker, a slide sandal with fur and a slide sandal with a knotted satin bow — all supposedly near exact copies of designs by Rihanna for her Feny line with Puma — off the market, the athletic and sportswear brand pushed back hard against a California federal judge’s decision not to halt their sales while infringement litigation winds its way to resolution.

The judge said last week that Puma hadn’t shown there to be an immediate threat to its business, calling for a quicker-than-usual injunction against the fast-fashion retailer and justified his position by pointing out Puma’s role in creating the alleged business “crisis” through its delayed legal action.

But the German company said in a Monday court filing that a “serial infringer” like Forever 21 is difficult to keep up with and it nevertheless took legal action within two weeks of learning the extent of the copycat designs, which are protected by a combination of design patent, copyright and trade dress.

“Puma intentionally produces a limited quantity of each Fenty shoe to ensure that the Fenty shoes maintain a reputation of an exclusive, luxury brand shoe. Puma’s marketing and production strategies also create desirability not only for the Fenty brand shoes but for the Puma brand as a whole,” Puma argued. “When the Fenty shoes are associated with a cheap mass market product they are no longer regarded as a luxury item and they lose their brand appeal to consumers and so does the Puma brand as a whole.”

By way of example, Puma said the recent launch of the Fenty satin bow slide was planned to tie in with the press cycle for Paris Fashion Week, but Forever 21 “swooped in and capitalized on Puma’s efforts” by mass distributing an “identical knock-off of an exclusive luxury good.”

“Forever 21’s actions damaged the Puma brand and the Fenty brand in a way that cannot be compensated by monetary damages because the harm is not quantifiable,” Puma added.

The company went on to note that it has already seen lower-than-expected shoe sales “as a result of the knock-off shoes” and that a soon-to-launch update to the Fenty fur slide sandal as well as other shoes are being threatened by Forever 21’s “penchant for copying each and every iteration of the Fenty shoes.”

“Without a preliminary injunction Forever 21 will be able to continue its pattern of infringement and capitalize on upcoming launches for the Puma Fenty shoes to the significant detriment of the Puma brand,” the company said.

A representative of Forever 21 could not be reached for comment.

Puma recently obtained an injunction against Top Shop over similar allegations that the U.K.-based retailer was selling knockoffs of Rihanna’s Fenty shoe designs.

Forever 21 has faced scores of lawsuits by retailers and designers, including Puma rival Adidas, Anthropologie, Diane von Furstenberg and Express, accusing the company of copying designs and intellectual property infringement. Many of the suits against the retailer have ended in confidential settlements.

Ethics Promise Could Save Ivanka Trump Brand From Retailer Suit