The brand has evolved from its earlier stages that included a license arrangement with Adidas focused on U.S. sales, and is now a global business selling directly to consumers. West’s nickname “Yeezy” morphed into an apparel moniker over the course of his collaboration with Nike on the Nike Air Yeezy about a decade ago, and prevailed as his subsequent fashion ventures set the foundation for the present-day brand.

Yeezy doesn’t share growth figures, but the brand has marked its ascent by releasing shoes in more colorways, styles and in greater numbers. Last year, the Adidas-Yeezy collaboration issued a wide release of the Yeezy Boost 350 V2 in Triple White, marking a shift from its small-quantity model for the first time.

Kenneth Anand, head of business development and general counsel at Yeezy Apparel, described the appeal of modern streetwear as a feature of innovative design rooted in a tradition of Nineties hip-hop and athletic culture. Raised in the diverse neighborhood of Montclair, N.J., Anand went through his own intertwining fashion and professional journey that at first meant ditching his bright blue velour Enyce tracksuit in law school for Banana Republic khakis and sweaters. These days, his style is more Yeezys and camo-print.

WWD spoke to Anand about the business of streetwear, advising Yeezy, and how fashion comes full circle.

WWD: So much of the sneaker aesthetic now seems to draw from Nineties and Aughts nostalgia and basketball or skater culture: high-tops, bulkier silhouettes, bright or neutral tones. What do you make of this paradox of pinning down what’s cool, when it’s so ephemeral, while also appreciating that certain looks have an enduring appeal?

Kenneth Anand: You know, for me it’s exciting and nostalgic at the same time, because the Nineties were really what we call the golden era. If you’re a hip-hop fan, you call it the golden era and so, for me it was high school to college, when I was in my peak phase of enjoying street culture and hip-hop. And all that influencing today’s fashion just seems sort of natural to me.

I also think that fashion and trends go sort of cyclically. So right now we’re seeing the Nineties, maybe last decade we saw some of the Eighties. We’re getting cool biopics about the Wu Tang Clan, and I’m getting to go to reunions of Mobb Deep. And all these things that I grew up with, and that really formed my interest in street culture, are coming back.

WWD: The Nineties aesthetic may have come back, but what are some ways the business is different in 2019?

K.A.: I think what always made streetwear and street culture important was that it wasn’t the norm. It was a subculture, it was about being different and not doing something that was corporate or readily available. And now that it’s getting to be corporate and readily available, it’s sort of struggling to find its identity. But the culture is always one step ahead, so I think we can all feel comfortable that there will be young designers and people who want to push the envelope to continue to stay different and challenge ideas. I think that’s a big part of what we like to do at Yeezy.

WWD: What do you think are some misconceptions about the sneaker business, or maybe just not well understood about it?

There’s just always going to be that aspect where some people don’t agree with spending money in that way.

I’m wearing a pair of sneakers that have never been out of the box today, and that just made me feel good today, that made me feel confident for this interview. So that’s an important thing to me. And I think that’s what fashion is about. 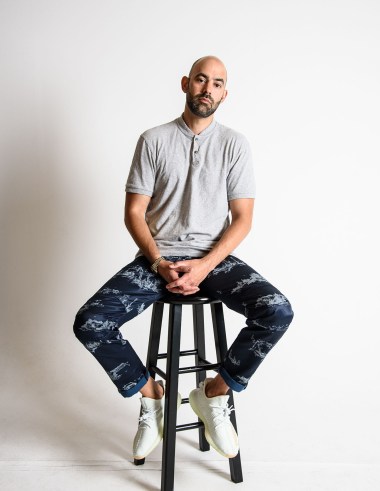 WWD: Let’s talk about the Yeezy business’ evolution. It seemed at the start, the focus was maybe more on U.S. licensing. How has that evolved?

K.A.: I think any company, in its early stages, will focus on its immediate market. And I think as a business grows, it likes to grow globally, which is what Yeezy has done. That’s no different than any other company that has immediate success.

I’m very excited to have lived through the expansion of the Yeezy brand from a regional to a global presence, almost overnight.

WWD: What is the relationship now between Yeezy and the consumer?

K.A.: Well, Yeezy has an online presence, where we sell clothes through e-commerce. Yeezy has its own e-commerce site, Yeezysupply.com, and that’s primarily how we reach our consumers.

WWD: When you collaborate with a brand like Adidas, how does the division of labor or resources generally work in the production of a shoe model, and who would own the intellectual property? Or is that something that has to be negotiated periodically?

K.A.: I can’t get into the specifics of how our IP is owned or shared with Adidas, but typically, there are either one of two ways to proceed — you can either license it, or the partner can own it.

WWD: As an attorney, how in the weeds do you get on designs? Do designers have to run things by you like, “Can we use this print on a part of shoe” or something like that?

K.A.: Typically, you’d have an approval process for designs and IP. I think at Yeezy, we’re a unique company where a lot of our designs are tonal and don’t involve heavy graphics. But we have had some instances where designs have to be approved and checked.

WWD: What are some of the business and legal concerns for brands like Yeezy today? I imagine copycats are an evergreen concern.

K.A.: I think our business is a little bit different because of the celebrity aspect of it. But what I would say, for most new streetwear and fashion brands, you know, they have to keep up with just the pace. And the appetite of consumers today is so voracious, that I think if you can worry less about what people copy, and more about how you’re going to continue to engage your consumer, I think you’ll be better off.

I mean, fast fashion is knocking off things left and right. But if you can stay ahead of it, and you can find a way to engage your consumers and create meaningful experiences for them as they shop with your brand, I think that would be the key.

It’s certainly an interesting time, with retail being where it is, I think brands have to be forced to think very differently. But that’s what fashion should be all about.

WWD: Is there anything you work directly on with Kanye? What is that working relationship like?

K.A.: I don’t interface with him extremely often, but when there are things that need approval or signature, I certainly will interface with him. As someone on a legal role, I’m not somebody who should be on his radar often. And I actually take pride in the fact that I don’t have to trouble him much. His focus is on design and creative, and if legal gets in the way of that too much, then there’s a problem.

WWD: What do you wear to work?

K.A.: I think, I wear what I’m comfortable in, number one. I love wearing sneakers every day. Obviously if there’s court or an arbitration, I’ll dress up a little bit. But it’s certainly different than what I used to wear at a law firm. Also, I try not to stand out at work, because there are creative and much more fashionable people there than me.

WWD: You’ve also been working on a book about sneaker law. Tell us more about that.

K.A.: “Sneaker Law” is basically what we want to be the bible for the sneaker industry. It’s an intersection of legal and business, and everything you need to know about the sneaker industry. I’m cowriting it with another Brooklyn Law School graduate named Jared Goldstein. And he and I are just two sneakerheads who are passionate about the law and the culture. I think we’re both people uniquely positioned in the industry to talk comfortably about the law and also the business and the culture of it.

WWD: In your book, what do you hope to explain to readers about this business?

To kids, for them it’s just buying sneakers and reselling them. But they may not know that there’s branding involved, that there’s laws and regulations. You know, how to start your own sneaker business, [and] if you have a great design, how to protect it. And they may not know the inner workings of what goes on behind the scenes. And I think that’s something that I didn’t get a chance to explore until much later in my career. Whereas if I had the knowledge and the exposure, it certainly would have been more helpful.

WWD: Do you think the law student you were would be perhaps delightfully surprised at where your career has brought you?

K.A.: Yeah, I think the law school me would be very pleased to know that 16, 17 years later, he was doing exactly what he wanted to do before he came to law school.

This interview has been condensed and edited for clarity.