A Turn Toward Online Advertising

Denim brands are beginning to grasp just how powerful a successful online advertising campaign can be. 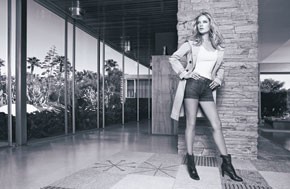 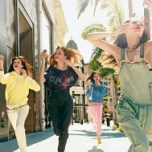 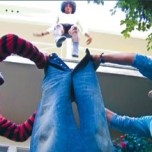 Denim brands are beginning to grasp just how powerful a successful online advertising campaign can be.

In the first four days after it premiered on YouTube, a new Levi Strauss short Web film called “Jeans Jump” attracted 1.4 million viewers — not to mention the attentions of David Letterman and Ellen DeGeneres. They haven’t run any segments yet, although the video has made its way onto “Good Morning America” and “Countdown With Keith Olbermann.”

The San Francisco-based denim giant launched “Jeans Jump” in early May to promote its Original 501 Button-Fly jeans. Over the course of the nearly 2-minute clip, a handful of guys are seen literally jumping into their jeans. It begins with one man’s simple-enough spring from a bed into his jeans and quickly escalates through Olympian levels of difficulty — leaping from a friend’s shoulder, from a handstand on top of a small truck, from a second-floor balcony, from a pogo stick — culminating in the circus-like launch of one man from a seesaw who does a back flip and sticks a landing in his Levi’s.

“We wanted to do something that was creative but not overtly branded with Levi’s,” said a company spokeswoman. “It’s just the beginning of our big global campaign that is launching in August.”

She declined to provide details on how much the campaign will cost, but last year the denim giant had $277 million in advertising and promotion expenses, down roughly $8 million from 2006. She added that this is the first time Levi’s has launched a film, but the Internet will continue to play a larger role in the company’s advertising mix. Many brands are expressing a similar sentiment, although it’s still early for measuring how Internet marketing efforts are affecting their bottom lines. But brands that want to be competitive with their peers and also reach out to a certain demographic are finding that print ads, outdoor signage and TV campaigns are no longer the only way to go.

“It’s a great way to get buzz in advance [of the campaign] and reach out to guys in their late teens and early 20s,” added the Levi’s spokeswoman. “We’re focusing on 21st-century media more than ever before.”

Nine or 10 more videos will be launched prior to the campaign in August to build the buzz for 501s. The first film was shot by director Benzo Theodore, former intern to Spike Jonze. And more viral films are in the works for later this summer.

“We had the guys jump into very starched jeans, so they would stay upright, and they all wore silk boxers to make it easier. And, for obvious reasons, we used the button-fly front as opposed to zippers.”

At Diesel, known for making bold and risky statements in its ad campaigns, plans are under way to expand its marketing presence on the Internet. According to a spokeswoman, the brand’s main source of Internet exposure so far has been only its own Web site.

“In the fall, look for a dramatic, new media presence,” vowed the spokeswoman, declining to provide details.

In the meantime, she said the brand is getting buzz from its new radio station, Diesel:u:Music. The station will broadcast live globally 24 hours a day from May 4 to 30 at Diesel’s Web site and on air in the U.K. This marks the first time in the U.K. that a fashion brand has received a radio license. The broadcast will feature live sessions from new artists, in-depth documentaries and 5-minute audio diaries.

“We are helping the online music community to evolve,” added the spokeswoman.

Seven For All Mankind also has a presence on YouTube, and a spokeswoman claimed it is one of the most-searched-for and talked-about premium denim brand online.

“If you know you are being talked about, you know your brand is healthy and continues to stay relevant to consumers,” she said.

Like many brands, the company’s marketing foundation began with public relations and forming celebrity relationships. Seven does not pay celebrities to wear its products, but the company does work closely with studios, wardrobe teams and stylists.

“We do not underestimate the power of celebrity and what it has done for the brand,” added the spokeswoman.

Layering on advertising was the next step in evolving into a full lifestyle brand and the first campaign was launched last fall. It was shot by Patrick Demarchelier with models Carolyn Murphy and Tyson Ballou, and ran in magazines such as Vogue, GQ, W, Vanity Fair and Details.

True Religion has made its way onto the Internet, although the company seems more focused on the launch of its first print campaign that also marks its first significant marketing investment. Marisa Miller, the 2008 Sports Illustrated Swimsuit Edition cover girl, was shot by Ashley Barrett for the print ads.

“For our inaugural advertising campaign, we wanted to capture the hippie-bohemian-chic spirit of True Religion,” said Jeffrey Lubell, chairman and chief executive officer. “This campaign also shows how we are expanding our line with handbags, footwear, swimwear and headwear all coordinated from a single design vision.”

The ads are appearing in magazines such as Elle, Lucky, In Style, Teen Vogue and Vanity Fair.

“Our advertising campaign in top-tier fashion magazines will bolster True Religion’s position as a premier luxury brand,” added Michael Buckley, president. “We are confident that our advertising investment of nearly $2 million will increase awareness of the True Religion brand and translate into sales growth across all of our sales channels.”

True Religion is just getting into print, but overall, big denim marketers are finding that adding a digital advertising presence — whether it’s a YouTube video or a banner ad on a blog — is becoming a necessary part of the advertising mix.

“This is just the beginning for us,” said the Levi’s spokeswoman.