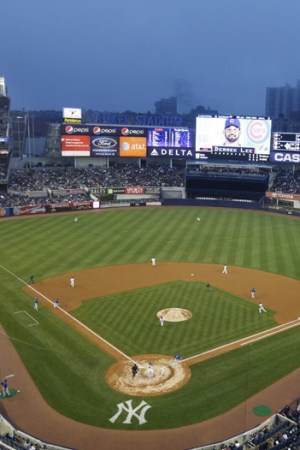 Come Thursday, when the new Yankee Stadium in the Bronx officially opens its doors, fans will find prominent sponsorships from an unexpected source: nonsport apparel companies.

This story first appeared in the April 15, 2009 issue of WWD. Subscribe Today.

Both Tommy Bahama, the island lifestyle brand, and Weatherproof Garment Co., best known for its casual jackets, have invested in the new ballpark, moves that underscore the apparel industry’s ever-widening search for novel marketing strategies and the growing appeal of the sterling Yankees brand. (For more on Tommy Bahama, see page 13.)

On Monday, Tommy Bahama said it would open its first stand-alone bar in the stadium. The same day, Weatherproof announced an agreement to sponsor the stadium’s field tarp, which is prominently stored along the third-base line.

Both are unusual steps for the companies, neither of which makes athletic apparel nor has an extensive track record of partnering with professional sports teams. Neither company would reveal how much it is spending on the sponsorships.

The Major Leagues have historically been home to mass market retailers and commodity brands. Anheuser-Busch, Gillette and State Farm are among the typical sponsors of Major League Baseball. The few apparel companies that do sponsor pro baseball, like Nike and Adidas, almost always hail from the athletic sector.

For a cold-weather brand like Weatherproof or an aspirational lifestyle brand like Tommy Bahama, investing in the new $1.5 billion stadium is a venture that will test their brands’ appeal with sports fans.

“I was concerned at first about how our brand would be perceived in a ballpark,” said Doug Wood, president and chief operating officer of Tommy Bahama. “You don’t see names like ours associated with a sports team.”

But the Yankees aren’t like other baseball teams. Ranked as the most valuable franchise in the sport with a value of more than $1 billion, the Yankees have long been considered the team of New York’s well-to-do.

And the specs of the new stadium suggest the team is working to expand its appeal to advertisers at the better end of the market.

The new stadium boasts higher-end eating options, including a Hard Rock Cafe and a pricy steak house, and double the number of concession stands, which, in addition to the customary hot dogs, sell sushi and artisanal sandwiches.

The stadium also offers 56 luxury suites — nearly triple the amount in the old stadium — and a 1,800-seat premium section that offers in-seat service, private restrooms and cushioned teak bleachers. A single ticket in the latter section sells as high as $2,650.

The strategy seems to be working. In addition to landing Weatherproof and Tommy Bahama as sponsors, the Yanks recently announced that Audi had signed a three-year deal as the team’s official luxury car, replacing its long-term agreement with financially ailing GM.

“These new apparel sponsors are consistent with the way we see the Yankee brand,” said a spokesperson for the team. “We have had sports-apparel companies sponsor for years, but we think we have broader appeal.”

Wood agreed the new stadium was a suitable platform for the Tommy Bahama brand. “It’s the most high-end facility I’ve ever seen; to call it a baseball park doesn’t do it justice,” he explained, adding the company signed a two-year deal with the Yankees to open and manage the Tommy Bahama Bar. “Don’t expect us to be showing up in other sport stadiums around the country; there is only one Yankee Stadium.”

A Weatherproof executive said he was confident the Yankees fan base overlaps with the Weatherproof consumer. While the company generally advertises to the trade through targeted outdoor initiatives or to consumers through print advertising, he said the opportunity to partner with the Yankees in the new stadium’s first season was too good to pass up.

“It’s certainly one-of-a-kind,” Eliot Peyser, Weatherproof’s chief executive officer, said of the sponsorship of the tarp, which will bear the Weatherproof logo for the 2009 season. “If you can’t get a billboard on 37th Street, you can always get one on 38th Street. But there’s only one tarp at Yankee Stadium.”

With approximately 4 million attendees a year and millions more watching on television, Yankees games can generate major exposure for sponsors who have their logos displayed on the field.

“I’m hoping A-Rod catches lots of foul balls this year with the logo in the background,” said Peyser, noting the team’s logo will only be visible when the tarp is on the sidelines and not when it is in use. “We don’t want our logo to be out there when they have the tarp on the field. No one wants to be associated with a rain delay.”