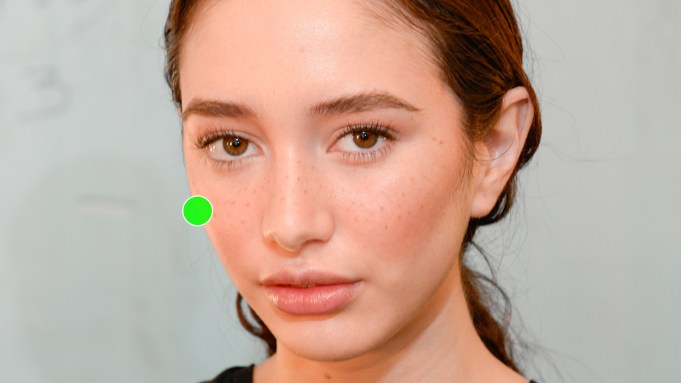 Project September may be named for the month with the weightiest fashion magazines and a slew of fashion weeks, but it’s not giving beauty short shrift.

“Lots of beauty brands are participating and some of them are big establishment players like the Estée Lauders of the world,” said Alexis Maybank, cofounder and first chief executive officer of Gilt Groupe who launched Project September in April with former Gilt Groupe vice president of creative Leah Park. “We are seeing an incredible amount of experimentation because it’s such a visual platform. It really lends itself well to color, whether it is a blue lipstick or a new application of sparkly eye shadow, and the how-to piece.”

Like competitors Spring and Wanelo, Project September attempts to lift the monetization roadblocks that stymied social media networks as business tools. In a notable pain point for beauty brands, consumers can’t shop directly from most images or videos on Instagram or YouTube. On Project September, green dots festooning posts indicate products that are for sale, and users tap on the dots to immediately buy the products. Pressing a green dot affixed on a photo featuring eyeliner could, for instance, lead to Guerlain’s Liquid Eyeliner in brown on sephora.com.

Project September users post photos from their cell phones or from social media onto the app and earn commissions estimated to be 6.5 to 10 percent on sales of the merchandise highlighted in their posts. The app works with brands involved to make sure their products are linkable within posts, and brands can set the commission they want to dole out to Project September users. The app takes a small cut.

“[Brands] have control over everything from the image of the products to the price, and they are putting their product in the hands of their best advocates to sell that product. It’s beneficial for both the brands and the person speaking about the brands,” said Maybank, elaborating, “You might follow someone who uses products that might work well on you and that helps people try new things. It’s capturing impulse buys or trialing of something that might not have otherwise been discovered.”

Project September is building an audience coveted by consumer product marketers. It currently amounts to tens of thousands of people spending five to six minutes daily on the app. Maybank described Project September’s users as in their Twenties and cosmopolitan, and revealed 75 percent of them are women. Although Millennial women still primarily shop for beauty at traditional stores, social media is increasingly influencing their purchases — and Project September and rival apps are betting they will be dedicating more and more of their beauty budgets to shopping on their mobile devices.

Speaking about young cosmopolitan consumers, Maybank said, “A lot of them are not necessarily going into the store as much as happened in the past. They are working really long hours really often in an office setting, so they are doing their browsing, seeking entertainment and purchasing all on their hand-held. That’s the audience we are reaching on Project September.”

This fall, Project September could reel in additional beauty brands with the introduction of shoppable videos. “They are really applicable to beauty,” said Maybank. “You’ll be able to see the application process and understand how to achieve a look, and the creator will not just show a certain look, but people can shop from it.”