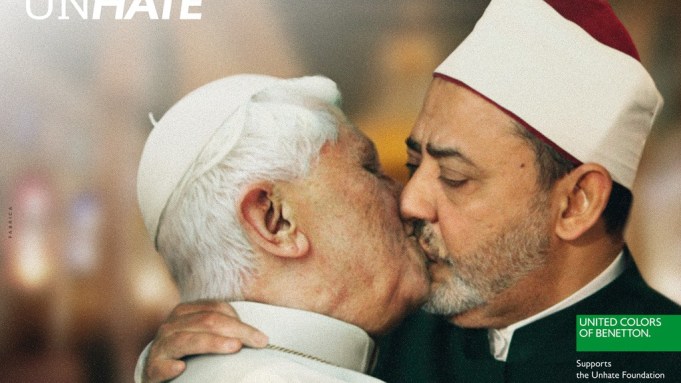 MILAN — The outcry over Benetton’s latest ad campaign continued to grow Thursday, with both politicians and religious leaders objecting to the images.

Benetton has upset everyone from the Vatican to the White House with its montage of close-up kisses between world leaders — President Barack Obama and Chinese leader Hu Jintao or Venezuelan president Hugo Chavez, and Palestinian president Mahmoud Abbas and Israeli prime minister Benjamin Netanyahu. The images are meant to promote its newly formed Unhate Foundation in a new ad campaign of the same name.

On Thursday, a White House spokesman said, “The White House has a long-standing policy disapproving of the use of the president’s name and likeness for commercial purposes.”

An image of the Pope kissing the Imam Al Azhar unveiled Wednesday prompted protests from the Vatican, which said Thursday it would take legal action to stop the distribution of the photo.

The image was quickly pulled by Benetton on Wednesday night, and the Italian clothing manufacturer stated, “We reiterate that the meaning of this campaign is exclusively to combat the culture of hatred in all its forms. We are therefore sorry that the use of the image of the Pope and the Imam has so offended the sentiments of the faithful. In corroboration of our intentions, we have decided, with immediate effect, to withdraw this image from every publication.”

But the power of the Internet makes it almost impossible to stop images from spreading worldwide, which caused the Vatican to urge its lawyers in Italy and around the world to “take the proper legal measures” to stop the use of the photo, even in the media, according to a statement. It was not clear if the Vatican intended to sue Benetton directly for damages. The statement said the ad was “damaging to not only to dignity of the Pope and the Catholic Church but also to the feelings of believers.”

“While global love is still a utopia, albeit a worthy one, the invitation ‘not to hate,’ to combat the ‘culture of hatred,’ is an ambitious but realistic objective,” stated Alessandro Benetton, executive deputy chairman of Benetton Group. “At this moment in history, so full of major upheavals and equally large hopes, we have decided, through this campaign, to give widespread visibility to an ideal notion of tolerance and invite the citizens of every country to reflect on how hatred arises particularly from fear of ‘the other’ and of what is unfamiliar to us.”

The executive said the campaign, which he described as a call to action, is in line with the history of the Italian brand, “which chooses social issues and actively promotes humanitarian causes that could not otherwise have been communicated on a global scale.”

As to whether such controversial images will work again today, marketing whiz Elio Fiorucci, whose revolutionary images in the Seventies and Eighties contributed to shape the way Italian fashion houses communicated, was cautious and expressed his opinion based on aesthetic guidelines.

“It’s a somewhat shocking campaign, and we are used to Benetton providing such imagery — the reaction was to be expected. It’s always correct to provoke a little, but I don’t know if pictures are that well made. I remember Toscani’s photos for Benetton of [a black] woman nursing a white child, for example. It looked like a painting,” said Fiorucci. However, he also conceded that “times were different” when Toscani worked with the Italian firm back in the Eighties and Nineties. “It made more sense then,” he said.

Alberto Fusignani, ceo and founder with Lapo Elkann of creative agency Independent Ideas, said the campaign was “a gratuitous speculation” on the part of Benetton and its think-tank Fabrica and that they “crossed the limit, so much so that the campaign becomes banal. They touched a predictable element in a calculated way to create buzz, but it lacks spontaneity. They knew the effect these photos would have and this is not correct, it’s an abuse of power somehow. To be provocative for the sake of it is not rewarding, even if you and I are talking about this right now.”

Fusignani, whose agency has developed ads for Italia Independent, the Fiat 500 by Diesel and the Fiat 500 by Gucci, was reluctant to pass judgment on Benetton and Fabrica, but added that this kind of communication “makes no sense at this moment and it’s not contemporary, nor is it creative. These are merely montages, Oliviero Toscani’s photos, for example, were at a different level, more artistic.”