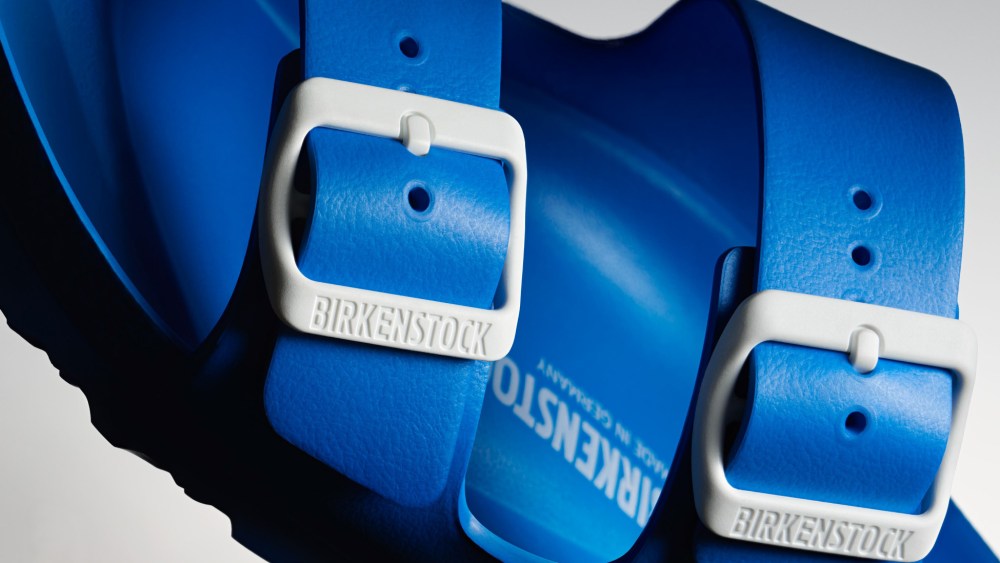 BERLIN — When it comes to Birkenstock’s ad campaign by still life pro Dan Tobin Smith, the medium is the product. And so is the message.

Smith, whose client roster includes Louis Vuitton, Apple, Nike and Alexander McQueen, has put individual Birkenstock models such as the top-selling Arizona sandal front and center but not quite straight on in a series of seven graphic images where only the product does the talking. Indeed, apart from the literally small print stating “Made in Germany. Since 1774. Birkenstock.com” the only brand identification is on the shoes themselves.

The campaign, art directed by Delerue Roppel, will go live digitally during New York Fashion Week in titles including WWD, NYT.com, Vogue.com and Spiegel Online, and then in print in the March issues of W, Elle, CR Fashion Book, Fantastic Man as well as Glamour, InStyle, FAZ, Stern, Brand Eins and Elle in Germany.

The campaign sets the stage for a year of new developments and initiatives at the iconic German footwear brand. And also a more publicly oriented approach for this family-owned company never known to strut its stuff, other than to remark that global demand for its Made in Germany footwear has outstripped supply for the last few years.

Sales figures have not nor will be forthcoming, with industry estimates for 2015 varying significantly from 500 million — 1 billion euros, or $554.8 million — $1.11 billion calculated at an average exchange rate for the year in question.

“Things are changing. The whole brand is getting younger, and we think we not only have to talk more about the product, but we’re developing a new language to communicate it,” commented chief marketing officer Yvonne Piu. Not to mention a global press agency network. The company, which is headquartered in the rural surroundings of Neustadt Wied in Rheinland Pfalz, is currently in negotiations with public relations companies in its key markets including the U.K., the U.S., Japan, China and German-speaking Europe.

“In the past, we worked with a small in-house team, but we have a lot so say, and so many products we want to make visible to our consumers. A p.r. network is the best way to get the most out of it,” Piu remarked.

The most recent addition to the Birkenstock lineup, which besides the heritage cork footbed sandals encompasses closed shoes, bags socks, knit caps and scarves, is sleep systems and beds. Introduced at the IMM furniture fair in Cologne in mid-January, the beds, like all products bearing the Birkenstock names, have been developed in-house. As for production, Austrian upholstered furniture maker ADA will manufacture the sleeping systems.

“In everything we do, we are always talking and thinking about how we can make life easier and more comfortable , wherever it fits,” noted Piu. Like the ergonomic footwear, the beds take their inspiration from the original Birkenstock anatomically shaped footbed. New features include undulating slatted frames and mattresses, which come in three different levels of firmness and three material versions, all incorporating a Birkenstock support layer of natural latex and granulated cork.

The sleep systems, in four box spring and two insert variants, carry a premium price tag of up to 10,000 euros, or $10,681 at current exchange. According to Piu, press and trade reaction has been extremely positive to this made-to-order product range.

Next up: beauty. Natural, of course, in keeping with Birkenstock’s stated commitment to “top-class materials from natural resources and well-being in a holistic sense.” While mum’s the word until the first view at Nuremberg’s natural cosmetics fair Vivaness in February, the 35 stockkeeping unit, sustainable refill system range will have a more prominent international launch in the fall, the company said.

Despite the nomenclature, however, the Birkenstock Box has to be the brand’s most out-of-the-box new venture. This mobile retail concept is a by-invitation-only program, set to be launched with up to 20 leading concept stores round the world in 2017-18, starting with Andreas Murkudis in Berlin next June.

What’s involved: a movable 600 square-foot container-like structure, the shell and basic form created by the award-winning Lot-Ek architectural design studio. The exterior will not change, but each retailer will be invited to personalize the interior with a local architect of their choice — as well as the assortment. This will feature the vendor’s bespoke Birkenstock edit augmented by a selection of whatever products from non-footwear brands they wish to present.  There will also be a Birkenstock edition exclusive to each location, and support via a local billboard campaign.

“The Box lets us get in touch with the consumer in a new environment, with style and in an outstanding presentation,” Piu said. She also expects the Box to allow the company to spotlight the brand’s more high-end products. At present, these tend to be almost invisible, unrepresented by most of Birkenstock’s shoe retail partners, and/or launched with little fanfare in the brand’s online shops.

The Box, she suggested, could be a new means of inspiration, even product. “Through talks with new architects, we could create a shoe together, for example. But overall, the exchange of information and creative thought is of high value for the team. It’s all new,” she said, “and we are very excited.”