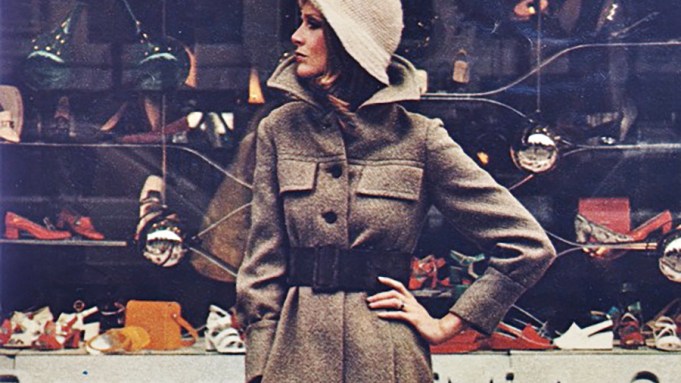 One of Charlie’s Angels is on a mission to relaunch a historic shoe brand.

Bruno Magli tapped actress Lucy Liu as brand ambassador, putting her at the center of its fall ad campaign. The partnership with Liu is expected to boost the relaunch of the brand’s women’s line in the U.S., after a three-year hiatus.

The campaign is a tribute to the brand’s Italian heritage. Shot by photographer Ruven Afanador, the images portray Liu next to model Marian Kurpanov in a series of glamorous sets, ranging from luxury yachts and old-style cafés to elegant art auctions. Inspired by Ruth Orkin’s renowned “American Girl in Italy” photograph, the black-and-white and color images are infused with a certain cinematic appeal and echo the brand’s sophisticated attitude.

This month, the images began appearing in fashion magazines worldwide and will be flanked by a behind-the-scenes video.

“Bruno Magli is a great fit for me because it’s so classic,” Liu said in the video. “I also love the heritage.”

Liu will collaborate with Bruno Magli’s creative team to release a shoe style bearing her name. Part of the proceeds of The Lucy shoe will be donated to UNICEF, which the actress has been representing since 2004.

“I love that [Bruno Magli] wanted to do something that also benefits children globally. It’s nice to be able to combine both of them [aspects],” she said.

The Italian house tapped Liu as an international face to celebrate its 80th anniversary, but the brand is not new to testimonials. In 2014, Bruno Magli selected actress and singer Park Shin-hye as its Korean ambassador and the face of its spring campaign. Shot in a studio, the images created a buzz in the Asian market due to Shin-hye’s popularity, and the collaboration was so successful, it was repeated the following season.

Since its earliest days, Bruno Magli has conveyed its signature sophistication and philosophy through its advertising campaigns, which evolved over the years from still-life images and movie-like close-ups to articulated fashion stories.

From fall 1962’s graphic sketch worked in a brown palette and 1985’s geometric still life in fire red, to the minimal attitude of the footwear close-ups from ads in the Nineties and 2000s, the images have struck a balance between the brand’s specific aesthetic and contemporary trends.

Starting with the fall 2012 season, then-creative director Max Kibardin injected a fierce, sexier twist into the campaigns, which also focus on ready-to-wear. Case in point: the spring 2013 images displayed a more provocative model shot on a rich, aristocratic set. Dressed in leather, she posed with accessories including leather ankle-cuffed high-heels and structured red briefcases that matched her lipstick, enhancing the images’ sensuality.

A similar scenario followed for fall 2013, as a blonde model sported the collection in a series of intense shots, set in dark, polished interiors. Leather, fur, velvet, silk and metallic garments stood out in a wide palette, ranging from classic black, dove, brick and mauve to vivid tones, like emerald and gold. Completing the look were the season’s key accessories: crocodile suitcases; two-tone leather tall boots and gold sandals embellished with jewel decorations; long leather, fur and suede gloves, and bijoux with colored stones, among others.

With this approach, Marquee revealed its strategy to tout Bruno Magli’s heritage to reaffirm its role as a brand rooted in a tradition of upscale craftsmanship.