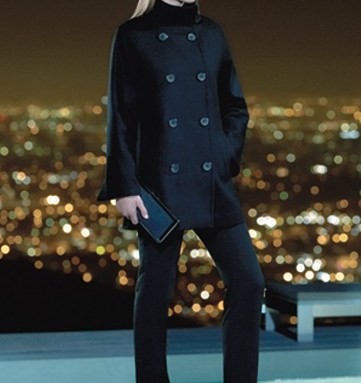 Delegating an array of labels and categories to other companies is key to PVH’s management.

Calvin Klein would be little without its partners.

The brand has leveraged its designer cachet into some of the industry’s most profitable licenses with firms including The Warnaco Group Inc., Coty Inc. and G-III Apparel Group Ltd.

“We believe in strong and big relationships,” said Emanuel Chirico, chairman and chief executive officer of Phillips-Van Heusen Corp. “Six licensing partners represent about 80 percent of our volume — we really consider them partners.”

The other three firms that have prospered with their Calvin Klein lines are Marchon, Peerless and Swatch. Less fortunate has been Kellwood Co., which just lost the women’s white label sportswear license to G-III and is in danger of losing ck Calvin Klein bridge women’s sportswear, according to sources.

“One thing PVH helped with was solidifying the relationships with Calvin Klein’s licensing partners, Warnaco in particular,” Chirico said. “Ten years ago, the relationship wasn’t always the best, and we and the Warnaco management team also worked very hard to all be on the same page, which has worked very well for both companies. We agreed about three years ago for Warnaco to take over the territories for jeans worldwide, and now it can grow faster, more quickly and more intelligently than previous partners.”

Warnaco is the largest CKI licensee, responsible for the Calvin Klein Jeans and Underwear brands.

“Warnaco is quite a success story,” said Tom Murry, president and chief operating officer of CKI. “They’ve been a partner for a long time, but the new management team has done an exceptional job growing those businesses. All of their businesses are performing extremely well.”

Last year, Calvin Klein represented two-thirds of Warnaco’s revenues, with the other third coming from the domestic businesses of intimate apparel, Speedo and the Chap’s men’s license. Driven by international growth, Warnaco’s Calvin Klein business grew 23 percent in 2007, and the goal is to double the business in the next five years from $1.2 billion to $2.4 billion, which would represent a 15 percent average annual growth rate.

“The brand awareness of Calvin Klein makes it a unique proposition,” said Joe Gromek, Warnaco president and ceo. “Calvin Klein is an American icon that is easily interpreted in global markets. Consumers understand the brand, so you open a Calvin Klein store and start doing business successfully on Day One.”

Warnaco has about 750 Calvin Klein stores internationally, of which about 60 percent are shop-in-shops, and Gromek projects that number can grow to more than 1,100 in the next four to five years.

Warnaco gave the Calvin Klein Underwear brand a goal to reach $500 million in sales over three years, and it did it in two. Now the company upped the challenge to reach $1 billion in sales in the next five years. Gromek attributed the brand’s success in underwear as the number-one global designer brand to the Calvin Klein name, its provocative marketing and superior product development.

“Having a great brand and great product is a good portion of the battle, but having execution is key and our people are executing at a very high level across the globe,” he said.

Calvin Klein Underwear has only one retail store in the U.S., in Manhattan’s SoHo, and Gromek thinks the brand could sustain five to six more in New York City alone, which he hopes to open in the next 12 to 18 months. Based on the success of the SoHo store, Warnaco also is considering other cities on both coasts, including Boston, Washington, Los Angeles and San Francisco.

Gromek said Warnaco is “always eyeing Calvin Klein licensees, but we prefer licenses on a global basis to be able to maximize opportunity.”

CKI’s largest licensed category is fragrance, with sales worldwide in excess of $1.5 billion. Calvin Klein entered a fragrance license with Coty, and the business has enjoyed a 15 to 20 percent annual growth rate since then, according to Murry. Coty isn’t the fragrance license’s first taker. Minnetonka Brands paid $1 million for it in 1980 and Unilever acquired the license in 1989, before Coty bought it from Unilever in May 2005 for an estimated $800 million.

“The other big success story is Coty,” Murry said. “Fragrance is not an industry that typically grows at that rate, but they do a really good job with product innovation and they spend a large amount of money on advertising.”

A smaller but quickly growing licensing partner is G-III. The firm first linked with CKI as the licensee for women’s and men’s coats, after that suits, dresses, performance and then, in August, women’s white label sportswear, which PVH had called Calvin Klein’s worst-performing license. Speculation abounds G-III may next get the ck Calvin Klein bridge license, which Kellwood also has held.

“Every single license we’ve given G-III has done well,” Murry said. “Whenever we get in new businesses or we move things around, we are always looking for new opportunities to give them.”

“G-III was a forerunner years ago on licenses, and Calvin Klein was a wonderful addition to our licensing deals,” said Aaron. “Calvin Klein has been nothing but excellent at retail.… We’re a very fast-growing company, and the Calvin Klein business is key to our growth.”