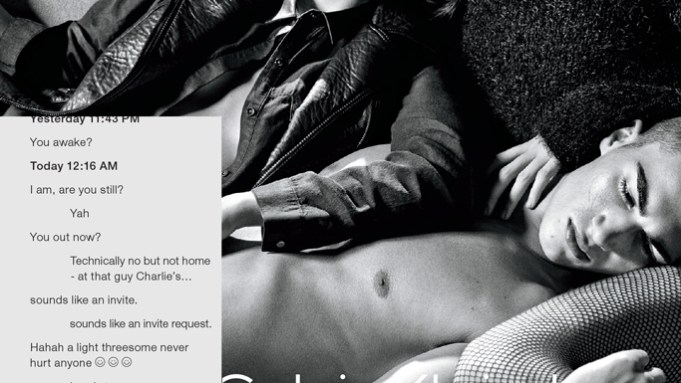 NEW YORK – Calvin Klein is betting on sexting and Tinder to help fuel the next iteration of its #mycalvins campaign.

“Our past campaigns have been more image-driven and this one was about starting a conversation through provocation,” Melisa Goldie, Calvin Klein Inc. chief marketing officer, told WWD about the next phase of #mycalvins campaign that hits today. The inaugural #mycalvins underwear campaign hit in February 2014 and expanded to include denim in October.

“We saw a behavior happening out there — and not just [with] the younger generation. It’s really dating via digital. It’s authentic and true to how this consumer communicates,” Goldie continued. “We’re highlighting the truth about dating – the meet up, the hookup and the freedom that you have through the digital dating landscape and how instantaneous it is.”

The brand wants to start a dialogue about how real people approach dating in the digital world. All images in the campaign, shot by Mario Sorrenti, contain a box featuring a text message conversation that led to each scenario — along with the tag line “raw texts, real stories” that are “inspired by actual events and people.”

The predominantly digital program will span 27 markets that will include nontraditional outdoor media, such as large-format static LED screens and street furniture in key global cities like Bangkok, Thailand and São Paulo. The lead image – a same-sex embrace featuring male models Reid Rohling and Ethan James Green – will replace eyewear on the brand’s signature billboard on Houston Street in SoHo here Aug. 3. In-book advertising is slated to run in September books starting in early August and an advertising rollout with Vice Media will begin in the fall in 10 markets. An integrated digital partnership with Tinder will go live in the fall, as well, featuring an in-app campaign giving users the choice to swipe right or left. Paid social media advertising is part of marketing spend, including promoted content on Facebook, Instagram, Twitter and YouTube to reach the brand’s collective 20 million social followers.

The campaign is a departure from the brand’s image and celebrity-driven ads of late — seductive shots of Justin Bieber, Kendall Jenner and Lara Stone in Calvin Klein Underwear that have helped #mycalvins become the brand’s most successful digitally driven campaign to date. However, it harkens back to Calvin Klein’s most controversial yet memorable campaigns, from the days of 15-year-old Brooke Shields in 1980 saying nothing came between her and her Calvins to the “group sex” shots in 2009, both of which generated huge outcries.

Since launching in February 2014, the current #mycalvins campaign has involved nearly 600 influencers from 31 countries, reached a global audience of more than 469 million fans and fueled 23.5 million fan interactions. In this time, Calvin Klein has bolstered its Facebook, Instagram and Twitter followings by 2.2 million, 1.8 million and one million, respectively. In the first four months alone, #mycalvins saw more than 4.5 million fan interactions through influencer, celebrity and owned content, and in a year’s time, had 100,000 user-generated submissions containing the hashtag #mycalvins.

And while underwear was front-and-center in previous ads — resulting in women’s styles selling out last year on calvinklein.com — consumers will have to go to the brand’s site or Macy’s to see what the denim collection actually looks like.

“The goal is always to sell product, but to be a relevant brand means that everyone needs to be talking about you and there has to be a conversation. Relevance is the driver of commerce. Sales are 100 percent as important as is driving a relevant conversation,” Goldie said.

But beyond relevance, does Goldie expect the ads to be controversial?

“No. I think the consumer expects that from us,” she said.