Once again, all the Calvin Klein brands are featured in one lifestyle campaign. 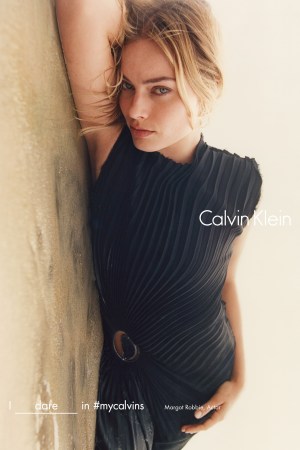 Kate’s back, along with Margot Robbie, Bella Hadid, Grace Coddington and a host of actors, musicians, artists, athletes, models, social media stars and rappers. They’re all appearing in Calvin Klein’s fall campaign, which is an evolution of the one from the previous spring. Once again, the company asked cast members to fill in the blank: “I _____ in #mycalvins.” Responses ranged from “look back” from Moss, to “intimidate” from Hadid to “dare” from Robbie to “purr” from Coddington.

In total, Calvin Klein gathered more than 25 people from all walks of life to participate in the shoot, which was photographed by Tyrone Lebon. In addition to Moss, Robbie, Hadid and Coddington, the crew ranges from Young Thug, a rapper, to James Rodriguez, a Colombian soccer player, to Presley Walker Gerber, son of Cindy Crawford and Rande Gerber. There is also Cameron Dallas, social media star; female Little Leaguer Mo’ne Davis; actress, musician and model Zoë Kravitz; indie actor Antoine-Olivier Pilon, and actor and model Aomi Muyock.

The fall campaign will be enhanced with digital and video content, interviews with each of the campaign cast members and behind-the-scenes material and social media moments that will run throughout the fall season.

“Our approach is digital-first, video-led and socially powered, providing our audience with an authentic and intimate experience that they can consume and share,” said Melisa Goldie, chief marketing officer of Calvin Klein Inc.

As an added layer, an immersive campaign hub launches today, on ck.com, beginning with a 24-hour integrated video takeover on its U.S. site, www.ck.com/mycalvins. The takeover is made up of a collection of more than 50 videos, featuring campaign cast interviews, behind-the-scenes content and talent performances. Throughout the day, there will be a continual stream of this video footage from the campaign, a selection of which is exclusive to calvinklein.com. During the fall season, ck.com’s digital “zine” will provide an audiovisual stream of stories that will be updated regularly, including articles about each cast member. In addition, the site will offer select talents’ Spotify playlists, presented throughout the season, as well as a custom playlist generator, whereby the user can choose a verb from a list of options and a customized playlist will be created on Spotify.

The campaign is planned across 26 global markets, with an expected 500 million impressions. It will consist of digital, mobile, print and outdoor advertising. After breaking in the press and social media today, paid advertising begins Aug. 1. The campaign was teased on Snapchat Tuesday night. The company declined to reveal the fall ad budget.

Calvin Klein has once again partnered with Dazed Media on a collaboration leveraging their print and digital properties. The global partnership includes a cross-channel and immersive program on Spotify that offers users a dedicated branded profile page with custom playlists and Calvin Klein content.