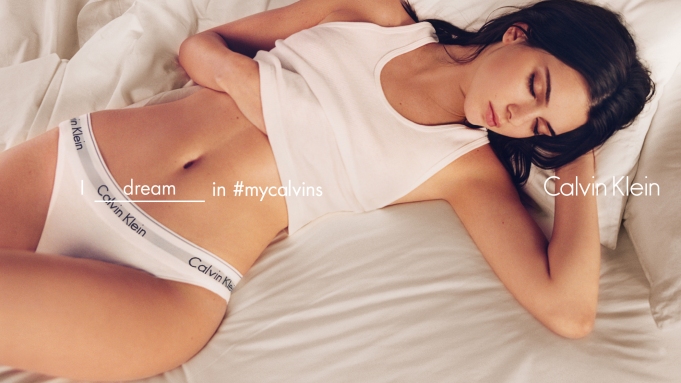 Kendall and Justin are back for Calvin again for spring — along with a diverse cast of other artists and musicians.

The new tagline is a call to action. “I ___ in #mycalvins,” which moves from the previous passive, solo moment of the static selfie to live action, supporting the concept that the movement and moments in life are what creates its sensuality and sexiness.

The “I ___ in #mycalvins” is included as text in the advertising visuals, and features a different verb in the phrase with each visual. Beiber, for example, says “I glow in #mycalvins.” Fetty says, “I am a star in #mycalvins.”

The campaign, which spans 26 global markets, is comprised of digital, mobile, print and outdoor advertising.

“This campaign is representative of how culture is evolving as we speak,” said Melisa Goldie, chief marketing officer of Calvin Klein Inc. “We’re bringing together a diverse mix of provocateurs with a unique collective of visual artists to create content that sparks and drives cultural conversation. Millennials reject labels when it comes to their own identities, and they want products that are personalized and individual, which we’re achieving as Calvin Klein moves toward further establishing itself as a lifestyle-centric global brand.” She said to do that, they have to recognize that people don’t want traditional one-sided advertising anymore. Instead, she believes, they want to participate in campaigns that capture their imagination.

For spring, Calvin Klein has partnered with Dazed on a collaboration leveraging their print and digital properties, which will culminate with the launch of the annual Dazed 100 list during New York Fashion Week. The brand has also joined with Spotify on a cross-channel and immersive program that offers users a dedicated branded profile page with custom playlists and Calvin Klein content.