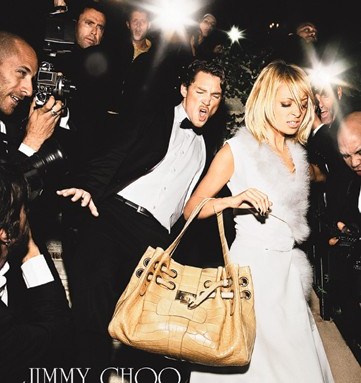 Tamara Mellon will always remember the all-nighter she pulled in London, to-ing and fro-ing on the phone with the celebrity stylists of Los Angeles who were desperately seeking Jimmy Choos. It was shortly before the Oscars in 1998, and the stylists were scouring the city for the stilettos and strappy sandals from a small but rapidly evolving cult brand.

“They were buying the shoes at Saks and Neiman’s,” recalled Mellon. “I thought, I have to go out there myself. There’s an opening for us here. Why don’t we dye the shoes to match the dress on the spot?”

The following year, Mellon boarded a plane for Los Angeles, accompanied by hundreds of white satin shoes in 25 styles, and one staffer specialized in dyeing them. She invited the stylists to pick their favorites — free of charge — while Mellon and her colleague got down to the business of customizing the footwear in their hotel suite.

Mellon remembered one Oscar year when she had to re-dye a pair of heels for Julianne Moore, after the actress decided to change her dress at the last minute. When the star stepped out of her limo in black Chanel couture, her black stilettos were still wet.

“We’d run around like crazy looking for shoes,” the celebrity fashion stylist Jessica Paster told W Magazine in 2006. She applauded Mellon for coming to Los Angeles, “offering us everything under one roof.”

Paster remembered the drama of dressing Hilary Swank for her first Oscar nomination. “We’d only found the dress [an olive ballgown by Randolph Duke] the day before, and Tamara came to the rescue. We stayed up until 3 or 4 a.m. playing around with colors, trying to find the right shade.”

Soon, nominees, presenters and plain-old guests — including Cate Blanchett, Halle Berry, Renée Zellweger, Salma Hayek, Cameron Diaz and Calista Flockhart — were wearing customized Choo shoes to the Academy Awards and other ceremonies. “It was a big breakthrough for us,” said Mellon of her decision to set up the temporary shop in Los Angeles each year. “And it’s still paying off today.”

Those early years for Jimmy Choo were all about making do with very limited resources — and a scrappy spirit. At the time, Choo was still a tiny and privately funded company operated by Mellon, founder Jimmy Choo himself and his niece, Sandra Choi. Creativity and ambition were the team’s most abundant assets.
“We always tried to think outside the box,” said Mellon, recalling that the ad budgets in those early years were miniscule, “something like 0.1 percent of sales.”

And, while Jimmy Choo would eventually engage celebrities and famous photographers for its marketing and ad campaigns, it has never relied on marquee names to sell the brand.

According to Mellon, the Jimmy Choo message has been — and always will be — about inspiring a broad range of women, whether through images created by artists such as Richard Phillips or Marilyn Minter, ones featuring established models like Amber Valletta and Angela Lindvall or others featuring the plus-size model Crystal Renn, who appears in the spring 2011 campaign shot by Inez van Lamsweerde and Vinoodh Matadin. Some observers say the Everywoman strategy has put Choo in good stead: While footwear competitors such as Manolo Blahnik, Christian Louboutin, Sergio Rossi, René Caovilla and Giuseppe Zanotti have cultivated a niche, insider appeal, Choo has gone in the opposite direction, developing a broader range of products and collaborating with mass brands such as H&M, Ugg and Hunter. “For us, the message is never about income or age, but about attitude,” said Mellon.

Although Choo is now backed by TowerBrook Capital Partners LP, with 115 stores and revenues of about 150 million pounds, or about $230 million at current exchange, Mellon — who has made millions over the past 10 years and remains a substantial shareholder in Jimmy Choo — still makes her annual trek to Hollywood for the Oscar shoe-a-thon.

Today, besides dyeing the shoes, Mellon and her team will attach fresh flowers, hand-paint or embellish the shoes with beads or Swarovski Elements. Mellon also models in the brand’s new fragrance campaign, shot by van Lamsweerde and Matadin, and works alongside creative agency AR New York to create a visual language for the brand.

Yet the Jimmy Choo language has not changed radically over the years.

“The customer has to dream and think, Maybe I could be her,” said Mellon, adding that her inspirations for the ad campaigns come from various decades and strong, creative women such as Deborah Harry and Jane Birkin. “The ads have always been about showing an empowered, fashion-forward woman who’s the right side of sexy.”

The first ad campaign, for fall 2000, was photographed by Raymond Meier and featured a leg model wearing a pair of beige knee-high stiletto boots — which would become a Jimmy Choo classic — against a cityscape at night.

Two years later, Mellon and her new private equity partners Equinox Luxury Holdings tapped Helmut Newton to shoot the campaign on location in Monaco. The colorful image of a barefoot woman sitting poolside with her heels on display nearby, was a clear signal the little London brand was ready to position itself alongside the big luxury fashion players of the day.

Ilaria Alber-Glanstaetten, chief executive officer of Provenance, a London-based luxury brand consultancy, said one of the things that sets Jimmy Choo apart from competitors has been its choice to play in the fashion, rather than the footwear, arena.

“Looking at the ads, you see they’re a sexy and extremely fashion brand. Over the years, they’ve pushed themselves further as a fashion brand compared with, say, Sergio Rossi and Manolo Blahnik, which position themselves as shoe brands,” she said. “[Choo’s]branding is very consistent, and they occupy a very distinct position in the market — at the intersection of shoes and fashion.”

While the Newton shoot was something of a budget stretcher — “It was just one shot, and our resources were limited, so we had to place it very strategically,” recalled Mellon — it sent a definite message to the market about the brand’s aspirations.

Two years later, Mario Testino turned his lens on Jimmy Choo for three seasons’ worth of ads, featuring a new product category — handbags. Hiring Testino also proved to be a very expensive business, so in 2006, Mellon decided to work with Brett Ratner, the producer and director of films including “X-Men: The Last Stand,” who had recently begun a career in photography. With Mellon’s creative input, Ratner would go on to shoot three campaigns, with celebrities such as Nicole Richie, Molly Sims and Quincy Jones. “We got a great response to those ads,” said Mellon, adding that working with Ratner was another example of “thinking outside the box.”

After TowerBrook came on board as Choo’s new owner, the company hired AR New York to be its creative agency in 2008 and began working with Terry Richardson to shoot campaigns with Lindvall.
In those years, Choo began acting even more like a fashion house, launching mid-season and capsule collections such as 24:7 — Choo’s collection of classic and best-selling styles — and creating stand-alone ad campaigns to go with them.

Richardson also shot the campaign for Choo’s collection with H&M at the Rooftop of The Standard in Manhattan. Mellon views that deal as something of a seminal moment for Jimmy Choo.

“It was one of our most successful collaborations, and it tested the elasticity of the brand,” she said. “We did men’s shoes, women’s clothing and jewelry — and there was no resistance on the part of customers. It shows that Jimmy Choo has a creative identity, and there’s a demand out there for the products.”

For its latest campaigns, Choo has opted to work with van Lamsweerde and Matadin. The duo shot Valletta wearing Choo for fall and, for spring, they shot Renn.

“It’s a Seventies, gaucho-girl story, but done in a very modern way with a lot of color,” said Mellon. “I think over the years, the Choo woman has definitely grown up and the ads themselves have become slicker and more professional.”

“I collect her work and she has shot Jimmy Choo shoes for her artwork,” explained Mellon. “She gets modern glamour, and I think when anyone looks at the images, they’ll get this decision to work with her immediately. I think it’s exciting for the customer to see us mixing things up  and using artists to interpret the shoes.”

Rita Clifton, the U.K. chairman of branding consultancy Interbrand, says there’s always been a “brainy element” to the Jimmy Choo ads and image over the years.

Before working with Minter, in 2007, Mellon worked with Phillips to create two limited edition bags: a clutch and a tote inspired by Phillips’ paintings of Sixties and Seventies beauty ads, which she unveiled at Art Basel Miami. And, while that collaboration was a success — “People are still asking me about those bags,” she said — Mellon pointed out that artist collaborations should remain rare and special.

“It’s not something you can force. You have to find the right fit,” she said. “It has to be a project that speaks to you in a certain moment.”

Mellon has said the goal is to transform Jimmy Choo into a business valued at $2 billion, and there are myriad expansion plans on the table. The brand, which is undergoing a strategic review with an eye to a possible stock market listing or sale, has recently launched its first fragrance and will unveil men’s footwear for fall 2011.

Mellon said clothing, jewelry and home goods are all potentially in the pipeline.

“Our goal is to turn Jimmy Choo into a lifestyle brand,” said Mellon, who insists the imagery of the brand won’t change. “Whether we’re selling home or ready-to-wear, we want to show how the Jimmy Choo woman lives.”