By Julie Naughton and Pete Born on April 15, 2011
View Slideshow 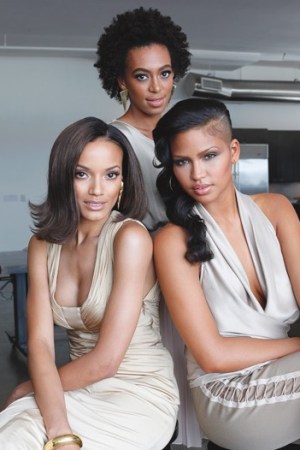 Carol’s Daughter has created a multiracial ad campaign — featuring Solange Knowles, Selita Ebanks and Cassie — in an effort to redefine the color of beauty to reflect a profoundly changing world. The three models, each of whom claims ancestry from at least two racial groups, form a multiethnic tapestry that meshes with new demographic trends emerging from the latest U.S. Census figures.

“What we’re doing now is moving into a polyethnic space,” said Steve Stoute, chairman and lead investor of Carol’s Daughter, noting that founder Lisa Price’s brand direction has always been about inclusion, beginning with her tag line, Beauty By Nature. “We want to be the first beauty brand that truly captures the beauty of the tapestry of skin types in America. When I say polyethnic, I mean women who are made up of several ethnicities. If you ask them what they are, they’re going to use a lot of different words to describe themselves. That’s in line with the Census data coming out — people are checking much more than two boxes. We believe we’ve put together a shoot that celebrates many different ethnicities, to become a mirror of what America’s really becoming.”

According to just-released numbers, nine million people reported belonging to more than one racial group in the 2010 Census, comprising about 3 percent of the total population of the U.S. Ninety-two percent of people who reported multiple races provided exactly two races in 2010; white and black was the largest multiple-race combination. An additional 8 percent of the two or more races population reported three races and less than 1 percent reported four or more races. Three quarters of multiple-race combinations were comprised of four groups in 2010: white and black (1.8 million), white and “some other race” (1.7 million), white and Asian (1.6 million), and white and American Indian or Alaska Native (1.4 million).

This is compared with U.S. Census data from 2005 to 2006, which noted that 5 percent of American children under age four were identified as multiracial, compared with 2 percent of people ages 25 to 29.

This widening trend is an open door to a new world, and one which Stoute and Price intend to kick open and lead the charge forward, joining early pioneers such as MAC Cosmetics, whose credo is “All Ages, All Races, All Sexes.” L’Oréal, Estée Lauder, Shiseido and Procter & Gamble have been building overseas product development centers, principally in the key BRIC countries, or Brazil, Russia, India, and China, to tap local expertise and gauge native preferences.

While various additional brands have expanded their offers to encompass, say, darker foundation shades or an ad with a model who is of one ethnicity or another — such as Lauder’s upcoming multiethnic campaign for Idealist skin care — Carol’s Daughter aims to showcase the customers who can’t be neatly slotted into one category or another. Take, for instance, Cassie, who is of black and Filipina descent, or Ebanks, who has Jamaican, Irish, Indian and African heritage and grew up in the Cayman Islands. Knowles is of African-American and French Creole descent.

“They will serve as cultural ambassadors in bringing forth this acceptance that the definition of beauty is now colorless,” said Stoute. “There are no longer boxes of white, black, Latina, Asian. More and more women are checking the other box.” According to Stoute, the trio was chosen because — aside from their beauty — “they share the vision and embody the messaging in their attitude, appearance, projects and core values.”

“Carol’s Daughter doesn’t have just one direct demographic,” said Ebanks. “Solange’s hair is a different texture than mine; so is Cassie’s. Our skin and body types are different. Today, people are blended, and I think the three of us are a prime example. Women in my family range from vanilla to the deepest chocolate.”

While the brand will continue to use longtime spokespeople and investors Jada Pinkett Smith and Mary J. Blige, as well as Price, in brand visuals, the three new spokeswomen speak to the “millennial generation, which is basically a colorless society,” said Stoute.

“They don’t see color anymore,” he said. “They’ll say, ‘my father’s black, my mother’s white’ — there are all these ethnicities that make up these people, and what we decided to do was mirror what’s happening in America.”

The new visuals, shot by Cliff Watts at Milk Studios, are set to drop in June, both in stores and in advertising, coinciding with a repackaged line entering stores.

The brand has also put itself on a stockkeeping unit diet, cutting approximately 25 percent of the line and repackaging the line to emphasize benefits of each of the products. “When you repackage, it gives you an opportunity to hit the reset button on what your offer is or should be,” said Stoute. Labels are the first element being changed on most of the line, although the brand’s new Monoi Repairing Collection, due in May, debuts soft-touch cylindrical, twist-top packaging with gold-accented labels, which will be a visual touch point for the brand’s high-performance hair care going forward. In 2012, all of the bottles will be completely updated as well — with, for instance, body care items packaged in food-inspired jars.

In addition, Price is taking the personal positioning of the brand to the next level by preparing to merchandise an at-home do-it-yourself soap-making kit called Lisa’s Kitchen. “People get the chance to be in my kitchen with me and kind of like to get to be me,” Price said. “You can buy a kit that teaches you how to make soap, then go into your kitchen and add some cinnamon to it, add some oatmeal to it. I’ll send you the soap; I’ll send you the mold for the soap; I’ll send you the fragrances. I’ll teach you how to add ingredients from your own kitchen into it to make your own products.”

She added, “It’s a way of reidentifying the brand — to take it back to the heritage without being so stodgy and stuck in the past, doing it a new way and giving them an opportunity to be crafty and opening up the brand to a new audience in a new way.” The kits will retail for $50 each and be sold on HSN.

Meanwhile, Blige is slated to make her third selling appearance on HSN Monday to hawk her scent, My Life, and the company is getting ready to launch a flanker, called My Life Blossom, as the next step in the Blige franchise. It is scheduled to be unveiled on HSN in August, and the R&B star is at work on another freestanding fragrance.

Stoute and Price declined to discuss overall revenues for Carol’s Daughter, although industry sources estimated that the company will generate retail sales of more than $50 million this year. The brand’s distribution is about 1,400 doors, including Sephora, Macy’s, Dillards, and the brand’s own freestanding stores, which now number nine. New freestanding stores are coming in the second half of this year in Chicago and Houston. “We are excited for Carol’s Daughter, a brand we have embraced for five years, as they expand to this new demographic with product favorites and new product innovations,” noted Margarita Arriagada, senior vice president of merchandising for Sephora.

“The brand has evolved, obviously, in growth and sales,” said Stoute. “I’m very proud of the presence and sales we’ve done at Sephora; what we’ve done with HSN has been phenomenal. We’re now the number-three beauty brand on HSN. Blige has the number-one fragrance on HSN. In the first four years, we’ve made a big dent in the industry. Also, if you’re a small brand and you survived ’08 and ’09 — and we still had top-line growth in both those years — you know you’re in it for the marathon. That’s what I feel like we’re in it for now, for the marathon. We’re repackaging, relabeling and we have these young, beautiful polyethnic women who are going to push our brand forward. It’s a perfect time for this phase of growth.”

HSN, in particular, has been an enormous awareness-builder, said Stoute. “When you have 94 million households and you have Lisa Price herself as the personality, it’s a tremendous tool — and people know the whole story.

“In building a new company from scratch, you make a lot of mistakes,” Stoute said. “And I think we’ve made mistakes, but we’ve done our best to limit them — we quickly find what the mistake is, so we can quickly fix them. I think we’ve done a very good job of doing that. At one point, we had too many sku’s that we had to rationalize and we didn’t have the lines organized and going as vertical as they should have gone. Now, I’m going much more narrow and deep with the brand than wide and shallow.” That involved, among other things, dropping some underperforming items and going deeper with some bestsellers, such as Hair Milk, which started with one sku and is now shampoo, conditioner and a light version of the original. “And our R&D mission is to find great products, great raw materials which create solutions you can see. We’re not going to just find a new raw [material] and do two things with it. We’re going to blow out things that have demonstrated differences.” That, he said, was the thinking behind the new Monoi hair care collection.

The brand plans print advertising and online advertising. “We are the number-two beauty brand in terms of followers on Facebook,” said Stoute. “We’re going to use a lot of our social prowess to use these photos, and we’ve captured a lot of footage [at this shoot] that we’re going to turn into vignettes to use online. We are going to buy some traditional advertising, but will also invest a lot on Web advertising — click and buy.”