DKNY Jeans is getting more aggressive in the celebrity fashion game ? and its partner of choice is actress Rachel Bilson. 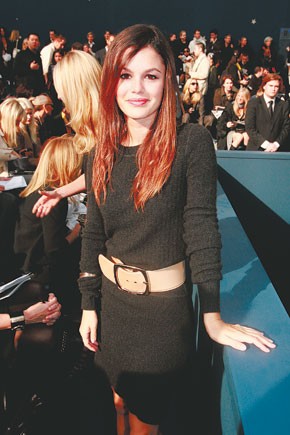 DKNY Jeans is getting more aggressive in the celebrity fashion game — and its partner of choice is actress Rachel Bilson.

Bilson, 26, best known for her leading roles in “The O.C.” and the current film “Jumper,” joins an array of fashion-hungry celebrities who are entering the fray, including rocker Avril Lavigne, who signed a deal with Kohl’s last week (the store is also said to be in talks with singer Vanessa Carlton for a jewelry line) and Nicole Richie, who is planning to do a maternity collection and a costume jewelry line. And industry executives claim more are in the pipeline.

“This is something that I have been interested in doing for such a long time,” Bilson told WWD. “I was just waiting for the perfect opportunity for it to be done right.”

For DKNY Jeans, the partnership gave the Liz Claiborne Inc.-owned brand a chance to address a more fashion-forward customer. The company will produce and distribute Bilson’s junior sportswear line, which will be called Edie Rose for DKNY Jeans. The collection will hit stores in September.

The deal came together after Bilson contacted DKNY Jeans to see if it would be interested in collaborating with her. “Fans of ‘The O.C.’ really like DKNY Jeans, and I know they make great stuff, so I thought it could be good,” she said.

“Our customer has a real emotional connection with Rachel and she’s always on the best-dressed lists, so it seemed like such a win-win for us,” said Kevin Monogue, president of DKNY Jeans. “Rachel has real personal style and she is very involved in every step. You can really see that in the collection.”

Monogue, who declined to give sales expectations for Edie Rose, said he is positioning the label to be sold alongside the DKNY Jeans mix. He is targeting the same department and specialty stores where the brand is sold, such as Macy’s, Lord & Taylor and Nordstrom.

Bilson, a Los Angeles native and self-described fashion addict who is a fixture in the front rows of the New York and European collections, has been doing her research. Since “The O.C.” ran its final episode last year, she clearly has more time to work the fashion scene. Not only was she spotted last month during fashion week in New York at Badgley Mischka and Zac Posen, but Bilson and rumored beau actor Hayden Christensen were also featured in a public service announcement for Aéropostale’s Teens for Jeans campaign last month. The campaign benefited teen nonprofit organization Do Something to raise awareness of the growing number of homeless teens in the U.S. and Canada.

The Edie Rose for DKNY Jeans line consists of about 15 pieces for the launch, including a sportswear mix of button-down tops, sweaters, jackets, T-shirts, dresses and two jeans styles — a straight leg and a skinny leg, both available in a dark wash. Monogue said the line is quite different from the DKNY Jeans collection, being made mostly in a simple black-and-white palette, with the occasional yellow as a pop color.

“I have a yellow scarf that I love and I was really inspired by it,” Bilson said. “I was so happy they were able to get that same yellow into the clothes.”

Bilson said that while she has never been trained in fashion design, she is making every effort to learn. She said she is even “laying low” in the entertainment world in order to learn more about design.

“This line is my main focus right now,” she said. “I can’t draw at all, so I won’t be doing any sketches, but I am learning to sew. I think it’s important to know more about the whole process of making clothes.”

Bilson said that when she came up with ideas for the line, she knew she didn’t want her own name on the label, which is why she chose Edie (after her grandmother) and Rose (a close family friend). She said these are two women who inspire her, so the name seemed fitting for her brand.

“I want people to see these clothes for what they are, not just another line designed by another celebrity,” she said. “I want the line to be taken seriously.”

True Bilson fans, however, will know that the Edie Rose for DKNY Jeans label will have something to do with the actress, as she will appear in the brand’s fall advertising campaign. She also plans to wear the clothes in her personal life.

Bilson said it’s also important to her to have accessible prices so her clothes can be bought by the majority of her fans. The entire line will wholesale between $19.50 and $49.50 per piece, which is in line with the DKNY Jeans range.

“I am just amazed at how the team at DKNY Jeans were able to listen to my ideas and come out with exactly what I was talking about. They literally brought my ideas to life,” she said. “I also want to show people that you don’t have to pay a million dollars for clothes that look good. For me, I love vintage clothes and I shop vintage all the time. It’s fun to play and put things together. You don’t have to spend a lot to get a great look.”

It’s a mantra being increasingly chanted by celebrities entering the fashion game — from Sarah Jessica Parker, with her Bitten line for Steve & Barry’s, to Sheryl Crow, with her new denim collection, Bootheel Trading Co. by Sheryl Crow. As the vendor and retail landscapes increasingly consolidate, both sectors are looking for an edge wherever they can get one, and are searching for celebrities to join the likes of Mary-Kate and Ashley Olsen, Gwen Stefani, Sean “Diddy” Combs, Beyoncé Knowles, Jennifer Lopez and Justin Timberlake.

Monogue said that, unlike the one-season partnership the brand had last fall with Fall Out Boy bassist Pete Wentz, called Clandestine Industries for DKNY Jeans, he doesn’t see the Bilson line as a one-shot deal.

“It has the potential to go long term,” he said. “Stores are looking for something new to have on the floor, and we are confident that they will really like what they see. The line with Pete was really great for us and having him in our ad campaign was a huge success. But since Pete’s line was already being sold elsewhere, we saw it as more of a limited partnership. With Rachel, we are really launching her. This will be her first foray into fashion, and she’s a girl, so that will be a strong connection to our customers.”