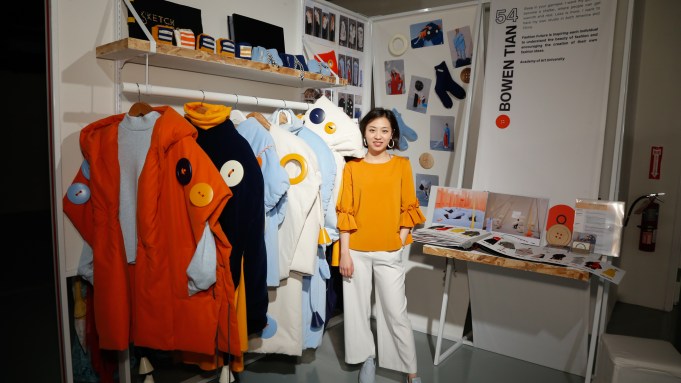 What happens after graduation day? Thanks to the Council of Fashion Designers of America and the New York City Economic Development Corp., 85 design students are getting a clear picture at the first Fashion Future Graduate Showcase.

Sixty up-and-comers from the Fashion Institute of Technology, Parsons School of Design, Pratt Institute, Rhode Island School of Design and Academy of Art University are displaying their collections as part of a two-day event at 415 Fifth Avenue in Manhattan. Twenty-five more will have information about their respective pursuits online at the CFDA’s site.

On Tuesday, the opening day of the curated, Made in New York exhibition, the CFDA’s director of education profession development Sara Kozlowski said she sensed a great feeling of optimism, noting how the students are versed in systems, sustainability, innovation and are very mature and pragmatic in terms of their view of the future. “That’s my favorite takeaway,” she said.

In addition to directors and deans of each respective school, who provided a short list of recommendations, the CFDA counted on Claudia Li, Rochambeau’s Laurence Chandler and Joshua Cooper, and Landlord’s Ryohei Kawanishi to take a look at the students’ work. The NYCEDC financed 50 percent of the project, Kozlowski said. Due to logistics and the available space at 415 Fifth Avenue, organizers had to whittle the list to 60 student designers, but for the next year, 85 newcomers will have their information featured on the CFDA’s site.

“After this week, when they wake up next week and the week after that, it’s nice that they will have a home to point to, she said, adding that as project opportunities come up during the course of the year, the participating students could potentially receive referrals.

Describing the future of fashion as “immigration and balancing Chinese culture while growing up in the U.S.,” Jeremyn Lee of Parsons said the showcase enabled him to connect with a tech company and a few possible employers. For the rest of this year, he will be completing a six-month apprentice program at Coach. “I’ve interned for a bunch of companies, and I think it’s super helpful to learn about the industry first,” Lynn said. “But one day I hope to have my own collection.”

Jacky Luo, who also attended Parsons, agreed that industry experience is essential before venturing out on your own. “It’s important to work with people first, and it’s better to make mistakes on other people’s terms,” Luo said, citing Calvin Klein and Céline as being at the top of his wish list.

Showing her Kait Kids collection, Kaitlyn Fitzgerald said she welcomed the chance to meet industry executives such as financial professionals, recruiters and design house representatives. “It’s harder to meet people now that everything is digital. To get jobs all you need to do is go online and search for their information, but this allows you to see them face-to-face and to actually meet people and make connections in real life,” she said.

Pratt’s Erik Goldberg explored the idea of using couture techniques that are dying out, such as using a repeat silkscreen print of an 18th-century picnic instead of a digital one, and used a hand stitch for quilting instead of a machine one. “I really hope to find employment. In addition to getting a job, I’ve been thinking about starting my own thing. So I think any connection is a good connection,” he said.

RISD’s Kylie Mara was also keen about meeting media, industry executives and other students. “This is amazing. I can’t believe this exists honestly,” she said.

Unlike most of the others at the event, Mara already has a full-time job as an assistant designer for soft wovens at Club Monaco, where she had interned. One of her professors, Catherine Andreozzi, plans to help Mara develop her own collection on the side as a mentor, Mara said. “It’s all set. It all worked out really smoothly.”