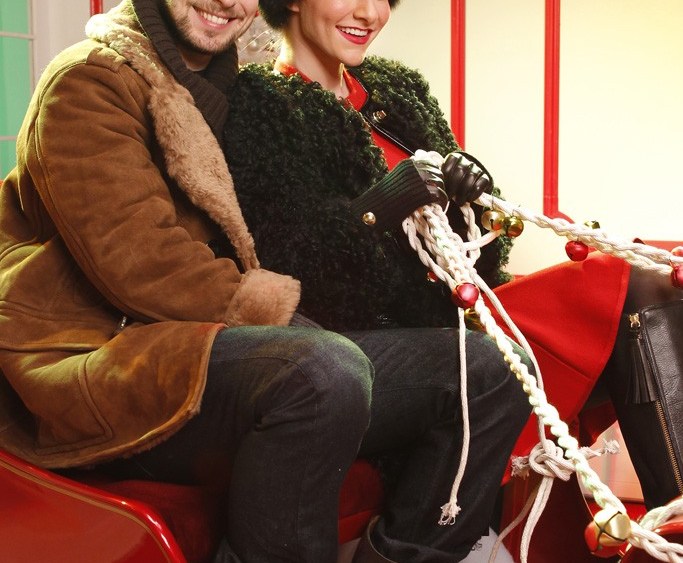 It’s another typically sunny day in Los Angeles, but inside the Hollywood sound stage where pop duo Karmin is getting ready to perform, the vibe is cold-weather Christmas.

To the uninitiated or those who do not spend their workdays prowling YouTube’s homepage, Karmin is Amy Heidemann and Nick Noonan, a 26-year-old engaged couple whose scaled-down covers of more bombastic pop fare such as Chris Brown’s “Look at Me Now” and Nicki Minaj’s “Super Bass” went viral last year, leading to a record deal with Epic and a platinum single this summer with “Brokenhearted.”

The occasion isn’t another television show appearance, although they do have an Ellen DeGeneres spot to thank for part of their meteoric rise in popularity. In the inevitable next step in stardom, Coach has tapped the pair to produce an original video to promote the company’s holiday collection on its Web site. The video will be released the same day, Wednesday, on one of the band’s YouTube channels, which has one million subscribers. Their three channels total have amassed nearly half a billion views to date.

Hence the red, white and green set complete with a flocked tree and a giant red sleigh. Back in wardrobe, the room is brimming with holiday merch ranging from shearling coats and puffer vests to boots, sparkly jewelry and lots of leather bags. Rachel Zoe has been tapped to style the shoot, and the “Rachel Zoe Project” crew is capturing every moment for the Bravo reality show.

“I did a whole Sixties thing around the holidays,” Zoe says. “Their personalities lend to it because Nick is right out of a Christmas catalogue in that kind of GQ shawl collar way and Amy is so eccentric and quirky.”

Heidemann, her hair in a coiffed topknot, has just slipped out of a chenille robe into a black Mongolian coat with patent leather trim. She completes the look with a black mink collar worn as a headband and black riding boots.

“I think the best way to describe our experience is whirlwind, because only last year, we were living in Boston and working these really odd jobs and making YouTube videos in our spare time to earn our audience,” she says. “Soon enough we had one that went viral, which meant it got like a million views a week or something, so lots of people were really aware of who we were. We started doing TV shows and signed a record deal, which is every band’s dream.”

Noonan, joining his fiancée on the couch dressed in a shawl collared sweater and his own red sneakers, says of the video, “We decided on The Ronettes’ version of ‘Sleigh Ride’ because it was super stupid catchy, so we were like, ‘Hey, I think we could make this fun.’”

Adds Heidemann: “We could Karmin-ize.”

Besides finishing each other’s sentences, the couple is adept at explaining the importance of the Internet and videos to their fame. “People talk about videos going viral and that’s such a bizarre concept because it literally didn’t happen four or five years ago. We are lucky to have something in that space because it’s going to be bigger every year going forward, so it’s really important to keep feeding that audience. Like ‘Gangnam Style,’ some of the biggest songs of the year started online,” Noonan observes.

“YouTube just happens to be the biggest video sourcing site,” says Heidemann. “It’s like bigger than Google now. Our first few cover songs went on one channel, which has close to a million subscribers, so what that means when we put this video up is that it’s being instantly shot out to a million people. They log in and it’s like, ‘Watch me.’”

Back on the set, the pair take turns lip-syncing their respective verses for close-up shots while perched in the spinning sleigh, then enact a scenario in which they come home from a tour to find their home tricked out for the holidays by Coach. They open presents, watch it snow outside, and end the evening collapsed on the couch surrounded by bits of wrapping paper. The resulting video and the items featured will be shoppable on coach.com, as will separate pages for Heidemann, Noonan and Zoe’s top picks. Behind the scenes footage will also post to the site as well as on Zoe’s show.

Up next are performances at the Macy’s Thanksgiving Day Parade and Rockin’ New Year’s Eve, and an untitled full-length album due in early 2013.

“No Doubt and Outkast I would say are the primary…,” Heidemann starts to say of the record before Noonan finishes her thought.

“…people we reference a lot,” he says. “Soundwise we like to say fresh, fun, energetic.”

The tracks will also feature a lot of earthy-sounding acoustic guitars and big drums in addition to pop elements and trombone.

“We’re superexcited about it,” they say in unison.