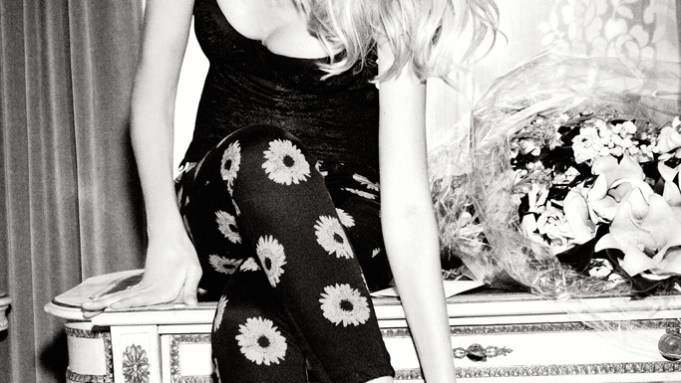 LOS ANGELES — To mark its 30th anniversary at retail, Guess Inc. is returning to its roots with fashion icon Claudia Schiffer, a lace bustier and a lot of sex appeal.

In an update of the iconic black-and-white photograph snapped by Ellen von Unwerth in 1989 of Schiffer wearing nothing but a bustier, gold hoop earrings and tousled blonde locks, Guess is premiering a new ad campaign highlighting Schiffer, along with a capsule collection inspired by her and other models who have appeared as Guess Girls.

“Fashion is nothing else but cycles,” said Paul Marciano, chief executive officer and creative director of Guess, which incorporated in 1981 but made its first shipment to stores in 1982. “The trend was there and the trend comes back.”

Sitting in a second-floor conference room set above a first-floor wall plastered with images of past cover girls — including Laetitia Casta, Naomi Campbell, Bridget Hall, Drew Barrymore and Estelle Lefébure — at Guess’ loftlike headquarters here, Marciano asserted that, of all the marketing promotions in the company’s history, Schiffer’s memorable bustier photograph for Guess served as a launchpad for everyone involved.

For Schiffer, who was featured in six campaigns from 1989 to 1991, the bond with Guess is still strong. “Guess will always have a soft spot in my heart, and I’m excited that 23 years later we can still work together so successfully,” she said. “Shooting the Guess 30th anniversary campaign was like going back in time. It brought back so many great memories and has been a lot of fun working together again with Ellen and Paul.”

In one of the campaign’s new photos taken by von Unwerth to evoke a Seventies seaside village, Schiffer is perched on a scooter parked at the port of Sorrento, Italy, wearing a lace bustier and skintight jeans that will retail as part of the capsule group dubbed the 30th Anniversary Collection. In another picture, she sits atop a gilded desk with her legs crossed in daisy-print jeans. The tag line handwritten in red on the black-and-white images reads “30 sexy years!”

Other items in the 15-piece collection include wide-neck T-shirts printed with bedazzled images of Line Gost and Anna Nicole Smith; a sheer leopard-print blouse; jeans with a cut-off waistband originally modeled by Adriana Lima; a sleeveless black-and-white gingham top worn by Eva Herzigova, and the three-zipper Marilyn jeans that launched the brand.

Retailing for between $39 and $138, the 30th Anniversary Collection will hit Guess’ flagships worldwide and department stores such as Macy’s on April 24. It will also be available on a new Web site, guess1981.com, launching specifically for the anniversary.

Guess declined to reveal the budget for the new advertising push. In its annual report filed with the Securities and Exchange Commission on March 23, the company said selling, general and administrative expenses increased 9.8 percent to $746.3 million for the fiscal year ended Jan. 28, due to factors such as higher global advertising costs.

Capitalizing on the international appeal of the German-born, U.K.-based Schiffer, who is married to “X-Men: First Class” director Matthew Vaughn, Guess is contemplating TV commercials in Spain, France, Italy and Russia. Moreover, it plans to broadcast behind-the-scenes videos of Schiffer’s photo shoot in American taxi TVs.

The campaign will break in Style.com/Print, due out April 2, and will also be published in the May issues of magazines such as Elle, Flare, GQ, Harper’s Bazaar, Lovecat, Surface, Travel + Leisure, V, Vanity Fair, Vogue, WSJ. magazine and Wallpaper. Guess will also run digital ads on Web sites such as nymag.com and Refinery29.com. Also in May, Guess will initiate a social media drive for Facebook, Twitter and Pinterest.

As for any concern that Schiffer is an unknown to the digitally savvy Millennials, Marciano said she is the favorite Guess Girl picked by his 17-year-old daughter, Ella, and her friends, who weren’t even born when Schiffer first modeled for the company.

“She’s been such an incredible success but kept her head so solid on her shoulders. Her key values are her family, her work and friends. That’s so important to us because it goes to the values of Guess,” he said. “At the end of the day, you have to stay true to your heritage, to your roots, and bring it to the digital world.”