Guests also learned of a new partnership with Women’s Wear Daily to launch the Clio Image Awards next spring, with online submissions starting in November.

By Rosemary Feitelberg on May 16, 2013
View Slideshow 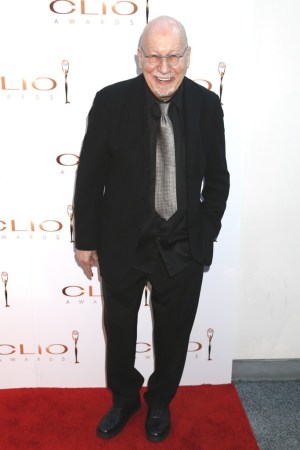 The awards were held at the American Museum of Natural History, which seemed apt for their slow pace. Even the evening’s host, “Modern Family” star Eric Stonestreet, couldn’t spur the crowd along during the three-hour long event despite telling them, “Let’s move and get through these awards as fast as we can so we can all go drink again. You will laugh short, you will laugh loud, you will keep clapping to a minimum and the quicker you come to terms with these rules then the sooner we can all get “Mad Men” on each other.”

Tommy Hilfiger energized guests with his recollection of how Lifetime Achievement Award winner Lois with one Times Square billboard created one of the most defining moments in the designer’s career. “For George, the idea is everything,” Hilfiger said before airing a video that spotlighted Lois’ commercials for MTV, ESPN, USA, Maypo and other brands.

“The more innovative the idea, the more courageous you must be to sell it,” Lois said. “Understand one thing — you can decide that no one ever can make you produce bad work.”

There was plenty of good work screened at this year’s event. Grand Clio winner Digital Domain’s “Virtual 2Pac,” a hologram of the late rapper Tupac Shakur that was created to perform with Snoop Dogg last year at Coachella, rallied the crowd. Another favorite was Grand Clio winner Cheil Worldwide for its public relations efforts for the Bridge of Life. After Seoul’s Mapo Bridge became a popular place for suicide, Cheil teamed up with city officials and Samsung Life Insurance to install sensors on guardrails that illuminate such comforting messages as “The Best is Yet to Come.” Lima-based Mayo Draftfcb, which took home Adweek’s first Project Isaac Gravity award for creating a billboard that converts humidity into clean drinking water, also grabbed guests’ attention.

They also learned of a new partnership with Women’s Wear Daily to launch the Clio Image Awards next spring, with online submissions starting in November.

Marcel Worldwide picked up the Agency of the Year award and a Grand Clio for Ray-Ban’s 75th anniversary campaign. Will.i.am talked up Ekocycle, his eco-friendly initiative with Coca-Cola (the evening’s Brand Icon) winner and how he was “kicking it with Rupert Murdoch earlier in the day.” “He’s cool,” the singer said.

Field was more focused with her thanks. “I live for beauty. For me, just making things that are beautiful makes me happy and makes me want to live each day doing what makes me happy,” she said. Heading for the door, Lois stopped to congratulate and meet Field, who encouraged him to stay for a drink. “Nah, I’m not a party guy,” he said. “This is my son Luke. He works by my side every day.”