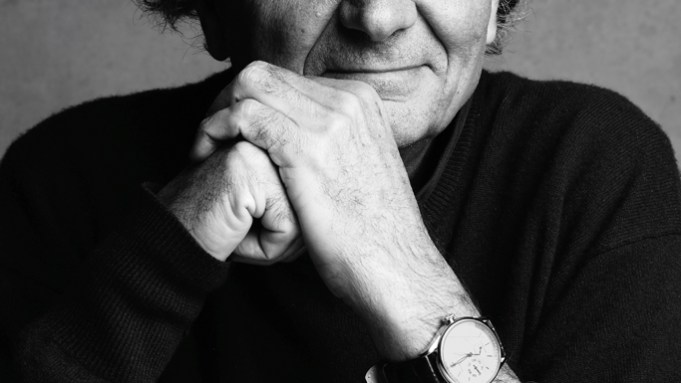 The Clio Image Awards will honor fashion photographer Patrick Demarchelier with the Lifetime Achievement Award on May 5 at The Plaza Hotel in New York.

An extension of the Clio Awards franchise, The Image Awards, which are in its second year, recognize the best work in fashion, beauty and retail.

“For three decades, Patrick Demarchelier has shaped the way the world sees fashion and beauty,” said Nicole Purcell, president of Clio. “Capturing essential qualities of his subjects with boundary-pushing photography, his work presents a timeless vision of the art and industry of fashion.”

The hurly-burly of lensman Patrick Demarchelier’s nonstop work schedule doesn’t leave much time for self-reflection. As this year’s Lifetime Achievement Award winner, the prized photographer said, “I don’t like to look at the past too much. I like to live every day and think about the future.”

With a bevy of editorial and advertising projects for such clients as Louis Vuitton, Christian Dior and Chanel, Demarchelier said his success hinges on his ability “to capture the optimistic way of life.” He added, “Everyone has something to tell you. Everyone is interesting.”

Born in France, he has called New York home for more than 40 years, though he is often in transit on international assignments. His shoot with Bosnian-born model Andreja Pejic for the May issue of Vogue helped to further the national conversation about transgender people.

Early in his career, Demarchelier worked for creative forces such as Henri Cartier-Bresson and Terry King. Like it or not, Demarchelier had to take stock of his own prolific career when the Petit Palais in Paris staged a retrospective with more than 400 of his images. With life and work keeping him racing around all the time, Demarchelier said his focus is always on what lies ahead. “It is interesting to see how somebody’s eye changes over 50 years,” he said. “Fashion has become like an art. Things have you racing all the time in life and work.

While his retrospective might be shown in New York next year, there have been no formal plans set just yet. And however nice it is to receive an award from time to time, when asked about any plans to celebrate after the gala, Demarchelier said, “No, no — back to work.” — Rosemary Feitelberg

“By simultaneously tapping into the power of the ‘selfie’ phenomenon and the reach of key influencers, we were able to increase engagement with a younger audience,” said chief marketing officer Melisa Goldie.

Backstory: To help celebrate the NBA All-Star Game in New York, in February, Nike created a full-size LED basketball court where fans could work out with the company’s sponsored athletes and trainers through virtual training programs. The graphics changed constantly to allow player and court to interact. For instance, arrows directed players where to go during running drills. Located on Canal Street, the pop-up court, with its larger-than-life swoosh and “Conquer All Courts” tagline, was open for three days and became a key stop for fans during All-Star weekend. Players such as Anthony Davis and James Harden also made an appearance over the weekend.— Jean E. Palmieri

Backstory: The campaign was shot by Inez van Lamsweerde and Vinoodh Matadin, in upstate New York, with Sasha Pivovarova and Andreea Diaconu in an Eighties-era Saab convertible. Laird + Partners chief executive officer and creative director Trey Laird said, “It was the idea of two girls off on an escape. Two friends, really like a Thelma and Louise type of thing — but with a happier ending.”— Jessica Iredale

Backstory: Target wanted to start a viral campaign for its Toms + Target collection and asked agency Mother New York to create a contagious pop-culture moment around the launch. So the team chose an unlikely vehicle: ugly holiday sweaters. Starting with the idea of two people wearing similar shirts, they came up with the Together Sweater, but with two heads, four heads and even 10 heads that would bring friends and family closer — literally.

Together Sweaters were sent to celebrities and influencers, who flooded social media. The two-headed model turned up on shows from “Ellen” to “The Tonight Show With Jimmy Fallon” to “Live With Kelly and Michael.” “Instead of paying them,” said an agency spokesman, “we bribed them with cookies.”— Sharon Edelson

Backstory: “The idea was, when you buy something new, you can donate something old,” said Nick Christiansen, copywriter of the Rag Bag campaign, a pilot program DDB Stockholm initiated in tandem with Swedish men’s wear brand Uniforms for the Dedicated, also including the Stockholm City Mission, a charity for the homeless. “The idea of giving back turned into a shopping bag that you can flip inside out, fill with an old garment and put in the mail, knowing that the postage has already been paid for by the brand.” The joint venture with Uniforms for the Dedicated was a no-brainer — the brand has sustainability written into its business plan. “They use recycled fibers and let customers rent their tailored pieces instead of having everyone buy one,” said Christiansen, noting DDB is seeking ways to expand the project internationally. — Paulina Szmydke