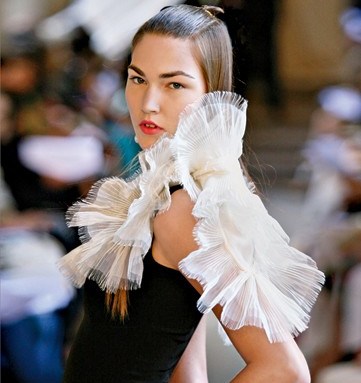 Hair Vue from the Back:
While the overall vibe was minimalistic, some designers opted for a decorative approach to hair. Lacroix’s models sported faux-hawks laced with black macramé, Jean Paul Gaultier’s bangs with strips of brightly colored net peeking out from underneath or elaborately caged updos echoing the shape of the clothes. At Valentino, chicly simple styles were given pizazz with fanciful gold jewels. At others, the hair was simpler, but no less effective in emphasizing the beautiful lines of the clothing, as with the simple crimped ponytail at Roland Mouret and butterfly clip at Alexis Mabille.

Makeup Sexy Eyes:
The stark smoky eye of the ready-to-wear gave way to a softer eye at the couture. Peter Philips used cloudy grays at Chanel, augmented with strong liner, while at Valentino deep bronzed eyes gave the face a polished look. At Elie Saab, dark metallic shadow was paired with a natural lip for a sultry take. The exception: Christian Lacroix, where masterfully blended smoky shadows were offset with a teal highlight on the upper lid and inner corner of the eye.

Makeup Strong Lip:
There was no consensus on color in Paris, but there was a common texture: Matte, full-coverage lipstick is back, be it bright—almost fluorescent— as at Jean Paul Gaultier, Jean-Paul Knott and Roland Mouret in shades of red, orange and pink, or deep cherry as at Dior.

Hair Volume:
Soft volume ruled the runways in Paris, as at Elie Saab, where the hair was whipped into a virtual cumulus around the models’ faces. At Giorgio Armani Privé, the action was confined to one side, with hair swept sleek on one side then gently frothing into chin-length curls on the other. Bigger is always better at Dior, where hair was teased, smoothed, then funneled into impeccably lacquered twists.

Makeup Barely There:
A fresh-faced innocence prevailed on many runways, as at Alexis Mabille, where rosebud lips on an otherwise bare face with hair pulled back in the center imbued the models with a youthful air. At Anne Valérie Hash, makeup was virtually nonexistent, save for thin strokes of black eyeliner and a slash of blush on the cheeks, while at Giorgio Armani Privé and Givenchy, natural took a more groomed bent, with slightly darkened lips, strong brows and absolutely perfect skin.