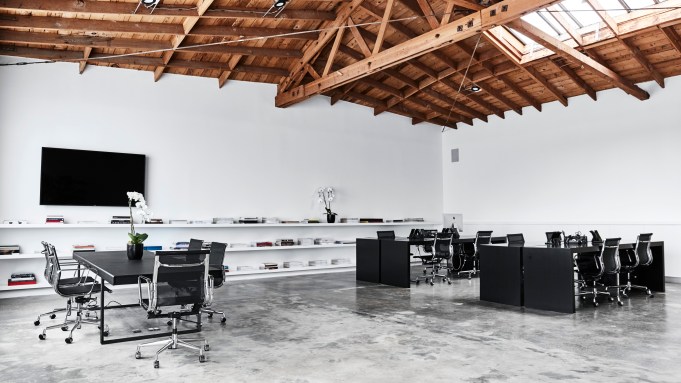 Alisha Goldstein is not so hot at drumming up her own press.

She’s not awkward in front of reporters or incapable of telling her story in a compelling way. It’s just that branding for her full-service creative agency tends to take a back seat to her work for clients.

She named her agency Jane Smith. The new headquarters — which also has a photo studio and serves as an event space for clients — opened up quietly on a stretch of Santa Monica Boulevard in Hollywood in an all white, single-story brick building. The 2,000-square-foot office is not something one just stumbles upon during a stroll; visitors entering are there with purpose.

“There are many creative agencies, but I think what we do is just a different kind of approach,” Goldstein said. “I’m horrible at self promotion. Even the name of my agency is anti-self-promotion.”

Goldstein also buys into her clients’ brands — sometimes quite literally. She’s been on the board of BKR for about six months and has equity stakes in other companies, sometimes striking deals with start-ups. Those young companies, which Goldstein declined to disclose, may not have the funds to pay her traditional fees and instead swap equity for her work — something she does if she believes enough in the brand.

“We get approached by a lot of companies that are in invention stage so an entrepreneur that has an idea will come to us and we’ll have them articulate their idea to us and we’ll do a brand book. So a lot of things we’re working on are confidential,” she said.

The office’s current workload totals about five clients, but that fluctuates based on projects. One of those five is a designer, which Goldstein was unable to discuss, who is in the midst of starting her own brand.

Jane Smith evolved about three years ago when Goldstein, a photographer and creative director, was consulting. A constant stream of clients prompted her to formalize an agency. Her newly opened office — with a staff of about 10 and a few more positions yet to be filled — services clients mainly in the fashion and beauty sectors doing everything from ad campaigns to content and digital strategy. Any communication that could potentially touch the consumer, Jane Smith might potentially handle.

The office opening is good timing, with Goldstein seeing ad spend among clients and across the broader industry generally on the rise in comparison to where it was a few years ago. How those dollars are being spent though is evolving, she pointed out.

“Our job’s changed quite a bit,” she said. “We used to have a photo shoot and we’d shoot something for an ad campaign and then those images would run in a magazine or on a billboard. Now that content has to work three times as hard. We have to take into account mobile, social media, digital and really map out how all that content unfolds. It also has to drive sales. And quantity of content. A lot of companies right now aren’t necessarily buying big media in magazines, but they have to have frequency of content for their digital, for their social media.”

Eventually, Goldstein said, she sees the office evolving into an incubator space for creatives and a place for events. And once the photo studio is up and running, it will allow her to do impromptu photo shoots with office guests.