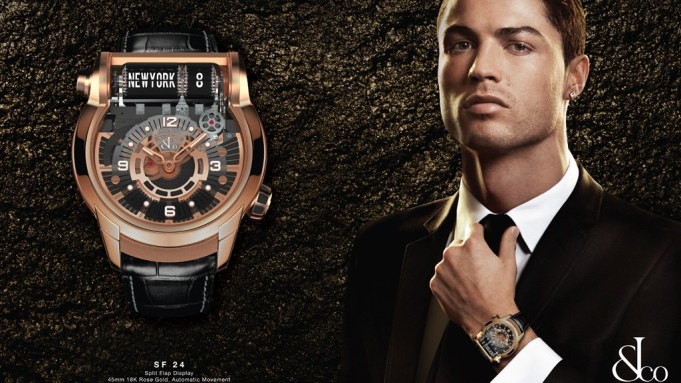 Soccer star Cristiano Ronaldo is the new face of watch and jewelry maker Jacob & Co., in a campaign that breaks in May magazines. Ronaldo, a forward for Real Madrid and captain of the Portuguese national team, is a long-standing client of the New York-based brand.

“I’ve been a customer and fan of the brand for a long time so it is a natural fit. I always used Jacob watches, even before I knew Jacob,” said Ronaldo, referring to Jacob Arabo, the founder of Jacob & Co. “The brand absolutely stands for leadership in creativity. As a collector of the world’s finest watches, it’s obvious [to me] how much passion Jacob & Co. has for quality. On the set, I fell in love with the new Ghost watch. It’s a perfect fit for my lifestyle as I’m constantly traveling internationally.”

The advertisements feature Ronaldo with Jacob & Co.’s new Ghost and SF 24 models, both of which offer multi-time-zone features and will make their debut at the Baselworld trade show at the end of this month.

The high-profile campaign — Ronaldo is the world’s most popular soccer player, at least on Facebook — comes as Jacob & Co. aims to reinvent itself following a rocky chapter in its history. Arabo, once known as the “King of Bling” for his iced-out designs for a long roster of hip-hop and Hollywood clients, spent almost two years in federal prison from 2009 to 2010. He was charged with falsifying records and lying to agents who were investigating money laundering by a Detroit-based narcotics ring called the Black Mafia Family.

“During a challenging time I realized the full potential of my team, who stood up to the plate in an incredible fashion,” said Arabo of his time away from the company.

As part of the company’s reinvention, Chris Del Gatto joined Jacob & Co. as chief executive officer earlier this month, assuming the responsibilities from Arabo, who is retaining the chairman title and will focus on design. Del Gatto was previously ceo of Circa, the high-end buyer and reseller of estate jewelry he cofounded, but he abruptly exited that role last year.

“I think it signifies a complete re-launch of Jacob & Co.,” said Del Gatto of the Ronaldo campaign. “He is one of the most famous soccer players in the world, but more than that he’s one of the most respected athletes in the world. He has attributes that we really feel mirror the Jacob & Co. brand. He’s superstylish, very smart, cares about how he looks and works really hard to stay on top of his game.”

The campaign is part of a multiyear endorsement deal with Ronaldo. Shot in a Madrid studio by photographer José Manuel Ferrater, the advertisements will launch in the May issues of WatchTime, Elite Traveler, Revolution, and Robb Report. Other titles in the media plan include Du Jour, FT Watches & Jewellery, Vogue Gioiello, Le Grand Mag and the Four Seasons and Ritz-Carlton hotel publications.

In the fall, the campaign is slated to extend to Vogue, Harper’s Bazaar, Town & Country, GQ, Esquire, Men’s Health, The New York Times and The Wall Street Journal.

“I always try to do my best on-set, as I do on-field,” said Ronaldo of the photo shoot. “I try to accomplish the briefing I’m told [about the campaign] and I’m quite used now to being in front of the camera.” Among Ronaldo’s previous campaigns are efforts for Emporio Armani and Armani Jeans, Nike and Pepe Jeans.

“My focus is playing football. I train hard every day, as I always want to perform better and better. That’s my responsibility. My other projects come after this,” explained Ronaldo of juggling his projects off the soccer pitch with his Real Madrid duties. “I have other sponsors, I have great social media, which helps me to be engaged with my fans, and now I’m the global ambassador for the Save the Children organization. I’m deeply committed to helping the fight against child hunger.”

Ronaldo has racked up 56.5 million likes on Facebook — more than double that of David Beckham — and 17.5 million followers on Twitter.

He is scheduled to appear on behalf of Jacob & Co. at a gala the company will stage at the Hotel de Paris in Monte Carlo in early July. The event is tied to a two-week company trunk show at the luxe hotel.

Previous faces of the brand include Milla Jovovich, Natalia Vodianova and Helena Christensen.

Jewelry comprises about 80 percent of total Jacob & Co. sales and watches are 20 percent. In the watch category, where many of the designs are unisex, about 65 percent of sales are to women and 35 percent to men, estimated Arabo. In jewelry, women’s accounts for 90 percent of sales and men’s for 10 percent. “Back in the day, it used to be a lot more men, but now it’s mostly women’s,” said Arabo of the changing nature of his business.

Del Gatto, who married longtime girlfriend Veronica Webb last month, said he expects watches to become a bigger part of the business, reaching 30 to 35 percent of total sales over the next few years. He outlined an ambitious plan to boost sales to $1 billion over the next three years, working with an England-based financing group to help fund growth. He declined to elaborate on the company’s current financials.

Jacob & Co. has about 150 retail and distribution partners around the world. In the U.S., key accounts include Tourneau, Neiman Marcus and Westime. The company operates a single flagship store at 48 East 57th Street in Manhattan, which opened in 2004. It is considering opening another store in Miami in the next year.

“We are hiring a management team to take the brand global and investing in marketing, new operations and procedures,” said Del Gatto, brandishing a look book that displayed the company’s inventory of showpiece jewelry, including the $75 million Splendor of Nature necklace that is set with a 44-carat D flawless diamond. “This is the kind of product we have here that people need to know about. We celebrate customers who want to make a statement and celebrate their own success. When they are looking to buy a 20-carat diamond and are going to Graff or Cartier, we are also that kind of brand.”

Asked if the company is moving past its “King of Bling” image, Del Gatto hedged. “We love all of our customers. We still deal with anyone who still bought from us four or five years ago. What we’re saying is that we’re not only that, we’re more than that,” he explained.