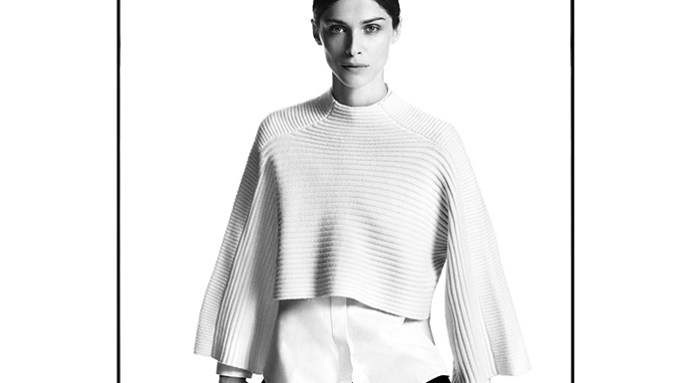 The British label Jaeger is going back to its roots for fall 2015, with a campaign shot by David Bailey.

The black-and-white images picture Sednaoui-Dellal in Jaeger’s pared-back looks that spotlight natural fabrics, such as a gilet in a gray mélange boiled wool, paired with a cashmere polo neck and the label’s signature camel hair coat, which for fall has a wider lapel and stab stitching details.

Sednaoui-Dellal, who was born in Egypt, raised in Italy and is now based in London, described Jaeger as “a really quintessential British brand.” “To represent [Jaeger] as a new Londoner means so much to me,” she said.

Colin Henry, chief executive officer of Jaeger, noted that Bailey was a “natural choice” to shoot the campaign. “[Bailey] made an invaluable contribution to our iconic heritage and now has to our modern narrative,” Henry said. “The images speak volumes about the contemporary vision we are building at Jaeger,” he said.

The campaign breaks in the September issue of British Vogue, and there will be an online element to the campaign, launching with The Times in London.