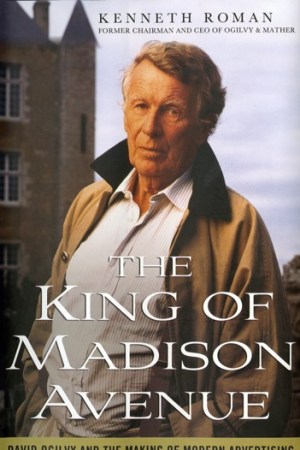 Advertising pioneer David Ogilvy is known for creating famed images such as the eye patch-wearing man in the Hathaway shirt, yet he is considered a master of the soft sell because of his belief that ads should focus on selling products rather than on entertainment.

That reason-based approach has particular relevance in this period of new frugality.

The English-born Ogilvy, a writer steeped in print advertising and Depression-era door-to-door selling of high-end Aga stoves in Scotland, thought ads should be tasteful and respectful of their audience. “The consumer is not a moron; she’s your wife,” the agency founder was known to advise. “Don’t insult her intelligence.”

Contrary to the title of the BBC documentary, “David Ogilvy: Original Mad Man,” the founding partner of Ogilvy & Mather was nothing like the heavy-drinking, chain-smoking ad executives on the hit AMC television series “Mad Men,” Kenneth Roman, author of a new biography of Ogilvy, who died at age 88 in 1999, said in an interview.

Recalling Ogilvy’s heyday as an advertising copywriter and ceo in the Fifties and Sixties, the decade in which “Mad Men” is set, Roman said, “He didn’t smoke cigarettes. He smoked a pipe. He drank in moderation. He almost never wore a business suit. He wore costumes (a kilt on formal occasions). He was a hard, dedicated, disciplined worker, who also had fun.”

The ad scene changed quickly and lastingly in the mid-Sixties, with the proliferation of commercials on TV — a medium for which Ogilvy had no feeling, Roman recounted. Spurred by creative rival Bill Bernbach, the ascendancy of visual images trumped the lengthy copy of print ads like Ogilvy’s.

“He never wrote a good television commercial,” Roman asserted. “He had no sense of technology. He had other things.”

Ogilvy was a freewheeling individual, as the author tells it in “The King of Madison Avenue” (Palgrave Macmillan; $27.95), given to wearing a “full-length flowing black cape with scarlet lining” to the agency he started in 1948, donning a kilt for formal occasions and seldom wearing a business suit in his 25-year run in the business, much of it during a period of social conformity.

Roman ought to know. He joined Ogilvy & Mather as an assistant account executive in 1963 (claiming himself to have had a two-martini lunch only once in his career) and rose to become chairman and ceo after Ogilvy stepped down 10 years later.

“At a time of gray flannel suits and button-down shirts, Ogilvy stood out as exotic,” Roman writes of the man who by the end of the Sixties had led Ogilvy & Mather to billings of $130 million and status as a top 10 agency in the U.S.

The advertising executive’s Scottish, Irish and English heritage was equally colorful, with links to the writer Rebecca West (a cousin) and former British prime minister William Gladstone (also a cousin). According to a 1970 issue of his agency’s newsletter, “Flagbearer,” Ogilvy was descended from Charlemagne by five different lines, a discovery made by a relative who traced the Ogilvy family’s history.

The British expatriate was sold on the value of consumer research in the early Forties, well before it found favor on Madison Avenue, when he worked for pollster George Gallup as an associate director, earning $40 a week. “There I was, going to Hollywood all the time and dealing with big shots like David Selznick and Sam Goldwyn,” Ogilvy told Printer’s Ink in a story told in Roman’s book. The studios looked to Ogilvy, Roman writes, “to measure the popularity of movie stars in terms of their power to sell tickets…and find out how many moviegoers had heard of a movie before it was released.”

Such methods came to the fore in some of Ogilvy’s best-known ads. Dove’s long-lived promise — “One-quarter cleansing cream — It creams your skin while you wash.” — stemmed from information gleaned during the ad man’s visit to a chemist at Lever Bros. The Rolls-Royce headline — “At 60 miles an hour, the loudest noise in this new Rolls-Royce comes from the electric clock” — was a detail “buried in a research report” and discovered by Ogilvy as he “read every magazine about the car business he could find,” Roman said.

At times, this rational approach took an emotional turn. En route to his first C.F. Hathaway ad shoot, working with a budget of just $30,000 for a print campaign, Ogilvy bought a black eye patch for $1.50 in a drugstore, Roman said. The man in the Hathaway shirt (model George Wrangel) was born and became closely identified with a series of regal, eye-patch-wearing characters (collecting butterflies, conducting at Carnegie Hall). The ads made both Hathaway and Ogilvy “instantly famous.”

“It was the first time shirt advertising focused as much on the man wearing the shirt as on the shirt itself,” Roman says in “The King of Madison Avenue.”

Sales of the Hathaway shirts more than doubled in the ads’ 19-year run in The New Yorker. Sales of Rolls-Royces climbed 50 percent in 1959, a year after the “loudest noise” campaign launched, according to the BBC documentary.

Ogilvy liked to say great advertising is marked by “a burr of singularity” — a “big idea” that sticks in a person’s mind, Roman writes. Much like the ad man himself.