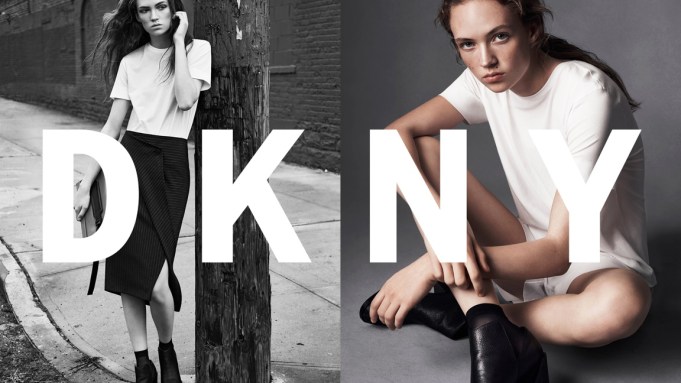 For their first advertising effort for DKNY, Dao-Yi Chow and Maxwell Osborne set out to capture the power embodied in the DKNY woman. And to be perfectly clear, she’s a woman, not a girl.

Photographed by Lachlan Bailey, the ads feature model Adrienne Jüliger. “She is versatile. She looks youthful, but also strong and sophisticated. We wanted a woman who could show all sides of herself. Adrienne’s change is subtle,” said Chow. Jüliger has walked the runway for such brands as Dior, Givenchy, Giambattista Valli, Saint Laurent, Louis Vuitton and Valentino.

Chow said the focus of the campaign is clearly the DKNY woman, and that’s been a point that the designers have made previously. Their DKNY customer is not a girl. “We always refer to her as a woman,” said Chow in an interview last September before their first show for DKNY. “The modern woman we envision has just started getting into her own in terms of career, starting a family, her life is multilayered with different dimensions. When you’re young, it’s not as complex. For us, those complexities and those dimensions are the interesting pieces in determining what she wants to wear,” said Chow.

The designers said they felt that in recent years, DKNY went off course in search of an expanded customer base and that the customer got younger and younger. “But it didn’t feel authentic to what the brand was, it was too young; it was just too young for us,” said Chow.

The spring DKNY campaign is about a wardrobe that allows the DKNY woman to become the focus “not the other way around,” said Chow. Through the images, Chow hoped to show the collection’s versatility.

According to Osborne, “We tried to capture the power embodied in the DKNY woman. She is a multidimensional woman who balances all versions of herself with DKNY…she embodies the new generation of powerful. She can be serious but doesn’t take herself too seriously.”

The DKNY spring ad images will launch in global fashion and lifestyle publications. The print plan will be supplemented by a digital media presence on global fashion and news sites. Forty percent of the global media budget will be invested digitally. This is a significant step for the brand, which last year invested 5 percent in digital. The company also plans to provide behind-the-scenes visuals of the shoot on its Web site. The digital component will launch in mid-February to align with the March issues on newsstands.